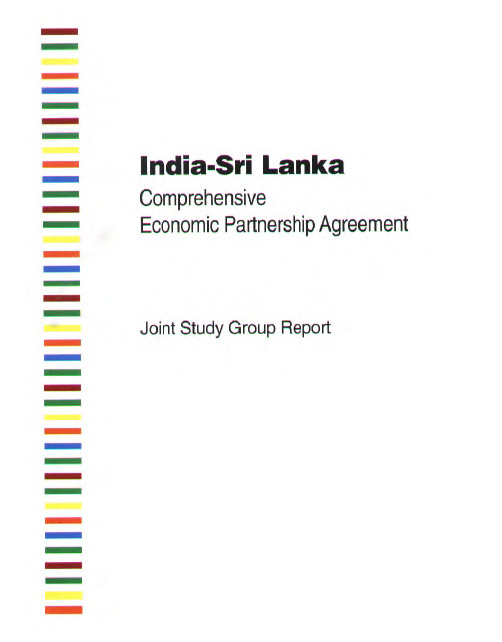 The India-Sri Lanka Free Trade Agreement (ISLFTA) was signed in December 1998 and became operational in March 2000. As a result, trade expanded significantly to touch US$ 1 billion in 2002. During the visit of the Sri Lankan Prime Minister to India in June 2002, the Prime Ministers of India and Sri Lanka discussed the profound changes in the international economic and political arena that have been generated by the process of globalisation, on the one hand, and emergence of closer regional economic associations, on the other. They agreed on the need to widen the ambit of the ISLFTA to go beyond trade in goods to include services and to facilitate greater investment flow between the two countries.

Accordingly, a Joint Study Group (JSG) was set up to make recommendations on how to take the two economies beyond trade towards greater integration and to impart renewed impetus and synergy to the bilateral economic interaction, through the conclusion of a Comprehensive Economic Partnership Agreement (CEPA). The JSG was appointed in April 2003 and held its first meeting in May 2003. Through its deliberations over five meetings, the JSG concluded that accomplishment of the CEPA would take the two countries to a qualitatively new level of engagement by intensifying and deepening bilateral economic interaction. It would also contribute to greater receptivity to bilateral, sub-regional and regional cooperation in the region by demonstrating visibly its benefits to South Asia as a whole.

The Joint Study Group report on the India-Sri Lanka Comprehensive Economic Partnership Agreement was presented to the Prime Ministers of India and Sri Lanka by the two Co-Chairmen on 06 October 2003.