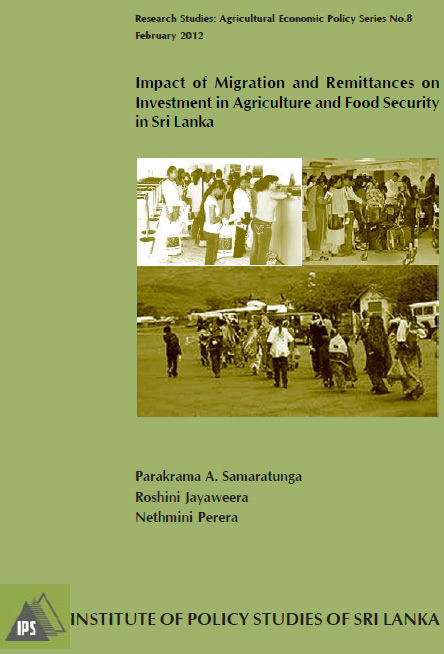 Out-migration for work abroad has been a known phenomenon within the Sri Lankan labour force for a long time. However, by the mid-1980s, the proportion of unskilled workers was becoming more significant and at present this percentage lies in the region of 65 per cent. A large segment of these unskilled migrants come from the rural sector where the main occupation is agriculture. Out-migration of small farmers or members of their families can have both positive and negative effects on rural agricultural production as well as consumption.

This study examines the impact on rural agricultural production and the food security situation in farm families resulting from out-migration of the members of the rural agricultural sector of Sri Lanka. The study is based on the information collected through a survey of existing literature, Focus Group Discussions (FGDs) and key informant interviews and secondary data gathered in the Household Income and Expenditure Survey (2006/07) conducted by the Department of Census and Statistics. Eight FDGs were conducted in Polonnaruwa, Ratnapura and Puttalam districts to represent commercial agriculture, semi-subsistence agriculture and fishery sectors, respectively.