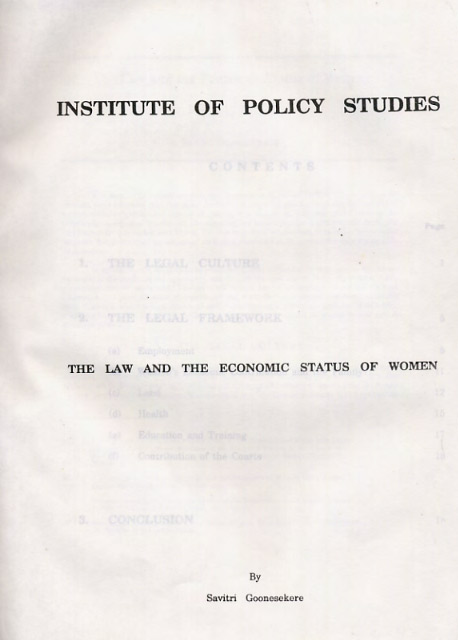 The Law and the Economic Status of Women

The data on Sri Lanka indicates that the position of the Sri Lankan woman is, in many respects, more advanced than that of her South Asian sisters. It also indicates that the majority of women work both within and outside the home, thus making an economic contribution of the community. ‘Integrating Women into Development’ has been a popular slogan not only during the UN Decade for women but even after it. The vast majority of women have been in fact active in the economy. It is only a small percentage of the female population of the country that depends on male ‘breadwinners’.

In certain limited areas of socio-economic activity Sri Lankan women receive egalitarian treatment in the family, in the community, and through the legal system. However, in other areas, discrimination continues to exist. This paper will evaluate the Sri Lankan legal culture, and legal framework, and show the areas of ambivalence and contradiction in regard to women’s economic rights. Unless a consistent legal framework and a supportive legal culture are developed in Sri Lanka, it will not be possible to mobilise the law in giving equitable treatment to women in their role as economic producers.