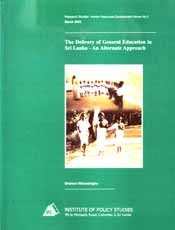 The Delivery of General Education in Sri Lanka: An Alternative Approach

This inquiry seeks to probe into several inter-related issues concerning the current approaches followed by the Government of Sri Lanka for the delivery of education by the public sector – with a specific focus on issues at the primary and secondary level of the delivery system. These issues relate to the structures, management, staffing and financing of the delivery system and its constituents. The ongoing system is evaluated in terms of its relevance to the task of the development of the country’s human resources in such manner as would contribute positively to meeting the current and future challenges of the Sri Lankan economy and society.

Sri Lanka has, during its half century of post-Independence history, witnessed several attempts at effecting changes in the primary and secondary levels of its education delivery system. It is, however, difficult to say that any of them have been optimally successful in achieving the goals they sought. The episodes were driven by what was perceived to be symptoms of inadequacies in systemic outputs or by current ideological fads and sought to achieve quick results. However, they failed to focus on the basic structural weaknesses, which impeded the constituents of the system from effectively responding to the demands of the changing economy and the society.

It is the premise of this inquiry that unless and until these structural issues are effectively addressed, any future reforms of the content and direction of primary and secondary education would continue to yield sub-optimal, and even negative, results. The expectations that would be generated in them would remain unfulfilled. The logical outcome would be a persistent state of cynical dissatisfaction on the part of the citizens.

It is, therefore, the objective of this inquiry to identify the structural issues which require to be addressed and to examine the vested interests within the polity and the bureaucracy that obstruct them being addressed. It also seeks to suggest changes that need to be brought about and to propose an agenda of action for implementing these changes.

These structural issues include issues of financing and management as well as issues related to ensuring quality of delivery of educational services. The issues that need to be addressed are identified through an assessment of the current structure. This assessment is placed in the context of the rapid changes in the economy and the society that impinge on education. It is essential that the changes that flow from the environment be taken into consideration in planning and implementing educational reforms. Failure, in the reform process, to appropriately and adequately respond to the demands that are posed by such changes would trigger a level of social unrest that would be well nigh impossible to contain.

The inquiry concludes with an appraisal of what the role of the State would be, in the context of the structural changes that are suggested. This, it is suggested, is an issue that has been avoided in previous reform episodes – based on an uncritical acceptance of an all-pervasive State as the basis of governance.