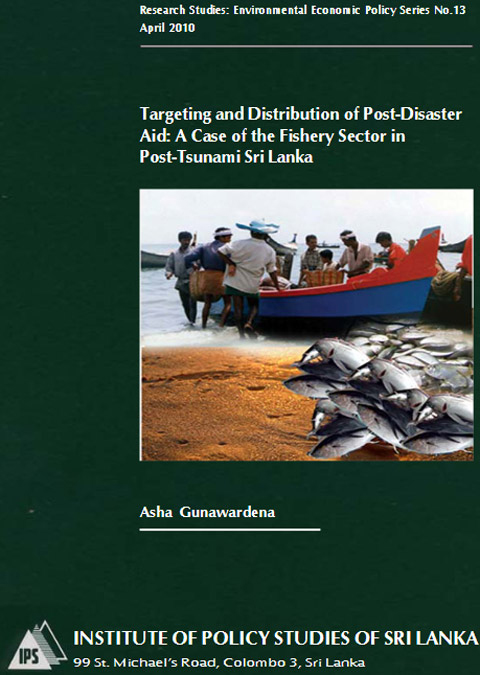 The study focuses on two types of aid transfers: boats and houses, which were distributed as part of an effort to rehabilitate tsunami-affected fishery household in six district of Sri Lanka. The study attempts to investigate the distributional impacts of these transfers on the affected households. The study also attempts to quantify the factors underlying the allocation of such asset transfers and examines the degree of which the government and donors targeted the right households. The study uses the Census of Tsunami, conducted by the Department of Census and Statistics in 2005, as the baseline survey for pre-Tsunami data. The study bases its findings on a follow-up survey carried out in 2008 for a sample of fishery households selected from the baseline survey. The results of the study show that there was better targeting of households for the allocation of houses compared to the targeting and allocation of boats. The findings also show that housing transfers have resulted in improved asset equality among the fishery households compared to what existed in the pre-Tsunami period. The boat transfers on the other hand were not only poorly targeted but have also resulted in an increase in asset inequality. The differences between the two aid transfers may be due to the differences in the nature of the assets transferred, the availability of specific government policies, the availability of systematic information and the dominant mode of aid delivery. The findings of the study also reveal that households who had access to social networks were more likely to receive aid transfers. Apart from household characteristics, regional disparities also played a role in the allocation of aid due to differences in access to infrastructure facilities, political preferences or the presence and absence of political turmoil. The findings also highlight the importance of making special efforts in targeting of such aid to reach certain sub-sets of people such as very poor marginalized groups and those who lost human capital in disaster situations.