Sri Lanka’s Food Crisis: What is the Role of Imports? 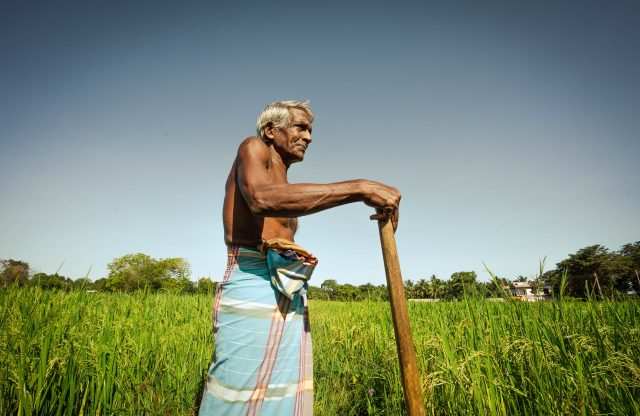 Food security has become a pressing concern for many Sri Lankans amidst a deepening domestic economic crisis, drastic loss of rice production, and post-Ukraine crisis commodity price surge in the world market. International organisations have started humanitarian programmes targeting the country’s most vulnerable citizens, while policymakers are pushing for increased domestic food production. Meanwhile, Sri Lankan households are bracing for a looming food crisis. Google search data shows a renewed interest in food security and home gardening-related search terms by Sri Lankans (Figure 1). Against this backdrop, this article assesses the role of imports and trade policy in safeguarding the food security of Sri Lanka. Dwindling foreign reserves in the wake of COVID-19 forced policymakers to impose waves of import restrictions which disproportionately targeted food imports. Various quantitative restrictions – bans, import control licenses, credit basis requirements – and price restrictions in the form of a special commodity levy (SCL) have been imposed on food imports since April 2020. Since intermediate and capital goods dominate Sri Lanka’s imports, policymakers tend to impose import controls on relatively less sophisticated food commodities, assuming they can be substituted by domestic production (Figures 2). Based on 2017 values, about 89% of food imports to the country are under quantitative and price import restrictions due to recent measures.

Amidst the restrictive trade policies, domestic rice production plummeted because of the myopic fertiliser ban. Unfortunately, the weak trade policy on agricultural raw materials increased Sri Lanka’s reliance on imported calories. Policymakers had to recognise the need for rice imports to compensate for the looming caloric deficiency in the domestic market. However, SCLs on pulses – black gram and green gram – and SCL on canned fish, sprats, dairy, and fruits continue while importing feed sources like corn continues to be restricted. When global wheat, fertiliser, and palm oil prices surged after the Russian invasion of Ukraine, Sri Lanka’s food security was already under pressure due to low foreign reserves, import restrictions and reduced domestic production. Source: Authors’ estimates based on a forthcoming IPS study on the impacts of import controls on Sri Lanka’s exports and the economy (2022).

In addition, Sri Lanka cannot produce certain crops due to agronomic reasons, which makes importing the only option. For example, lentils and wheat do not grow in Sri Lanka. The domestic substitutes are imperfect – less palatability and production difficulties – higher in price and short in supply.

Second, given the input-induced slump, Sri Lanka has to import rice to meet the domestic caloric requirement. It is estimated that Sri Lanka must import 600,000 metric tonnes of rice to compensate for the domestic production loss.

Third, the attempts to substitute food imports domestically generate additional costs, including high domestic prices and diverting more resources to the already low-productive agriculture sector of the country. Higher domestic food prices are good for net food producers, but the urban and sub-urban net food consumers in the industrial and service sector are worse off. The outcome could be increased demand for higher wages which reduces the profits in the industrial sector and further expansion of the industry. Such developments will impede Sri Lanka’s export-led growth strategy. Policy options for Sri Lanka to avert a food crisis

Many of Sri Lanka’s immediate economic problems boil down to one factor: the lack of adequate foreign reserves. While Sri Lanka has embarked on a path to resolve the crisis, it is essential to look at the available low-cost policy options to prevent a food crisis. Importantly, Sri Lanka has to prioritise importing rice, wheat, pulses, lentils, and canned fish – funnelling the available foreign reserves to these essential food imports. The critical challenge in pursuing this policy option is the foreign exchange shortage.

A close look at the import structure shows that Sri Lanka’s fuel import bill has skyrocketed. Since import controls cannot be expanded without severely restricting the economy’s production activities and affecting domestic food security, the only option is to cut down on non-industrial fuel consumption. Rationing fuel, working from home, and facilitating alternative transport modes would help manage fuel demand.

The second policy option is to increase domestic agricultural productivity to the pre-fertiliser ban level by reintroducing the fertiliser subsidy with measures to improve fertiliser use. Site-specific fertiliser recommendations, soil testing, and discouraging overuse of nitrogenous fertiliser through tariffs are such measures.  Again, it is imperative to prioritise fertiliser imports over non-industrial fuel consumption. Despite the popularity of home gardening, it is ineffective in bridging a significant gap in the domestic supply and demand of calories. Thus, boosting the productivity of the existing producers is an economically efficient option. The current downward trend of nitrogen fertiliser prices in the world market will reduce the fiscal pressure of a fertiliser subsidy to a certain extent.

Third, Sri Lanka should use food donations, if offered. It should be done carefully as flooding donated food will distort the market reducing demand for food items – rice and vegetables – produced by domestic producers. Distributing food donations to the most vulnerable groups and school meal programmes, using donor funds to purchase food from the domestic market, and food-for-work programmes may avert market distortion. These measures will prevent a severe calorie deficiency, keep industrial workers’ food budget low; as such, upward pressure on wages is reduced, avoiding further resource allocation to the agriculture sector to better facilitate an export-led growth strategy.