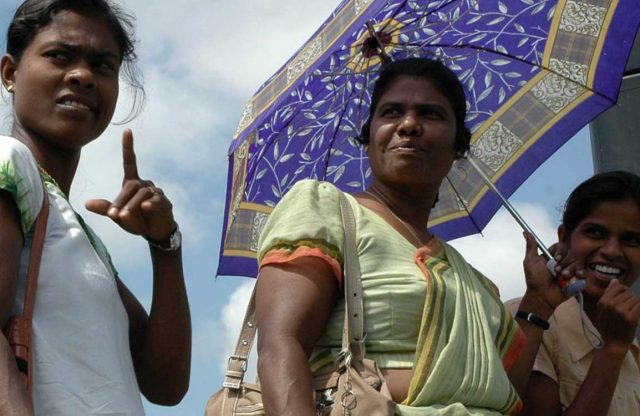 Democracy, by its very definition, calls for the representation of all citizens. Hence women in politics are essential for representative governance. However, while global statistics for female representation in governments continue to improve, equal political participation is still a far-fetched goal. The Inter-Parliamentary Union reports the global share of women in national parliaments to be only 26.1% as of February 2022. This share is still lower at a mere 17.8% for South Asia at the regional level.

Gender equality in politics is vital to achieving the 2030 Sustainable Agenda. This is outlined by SDG Target 5.5 – “ensure women’s full and effective participation and equal opportunities for leadership at all levels of decision-making in political, economic and public life.” Research shows that women in power contribute to reduced gender gaps and lower levels of gender-based violence since female leaders are more likely to tackle such issues with a greater sense of priority. In addition, the implementation of legislation that contributes to a safer environment for women and children leads to better educational outcomes and employment opportunities, which contribute to overall socio-economic improvements in the long term.

Although Sri Lanka elected the world’s first female Prime Minister in 1960, over six decades later, the country’s political arena continues to be male-dominated. This blog explores the gender disparities in Sri Lankan policymaking and outlines actionable steps to increase the share of women in politics.

Sri Lanka currently ranks at 179 out of 189 countries for the percentage of women in national parliaments. This is far below its South Asian counterparts. Women represent over 52% of the country’s population, yet men continue to play a dominant role in the national legislature. Insufficient female representation is a prominent weakness in Sri Lanka’s political landscape.

As shown in Figure 1, the share of women in Sri Lanka’s Parliament has gradually increased since Sirimavo Bandaranaike was sworn in as Prime Minister in 1960. However, this share has never crossed 6.5% since 1977. The 2019 Presidential Election recorded the highest number of contestants in a Sri Lankan presidential election. Of the 35 presidential candidates, only one was female. With an overwhelming majority of the current administration being male, the current share of female members of parliament stands as low as 5.33%. Source – Author’s illustrations based on data from the Parliament of Sri Lanka (https://www.parliament.lk/) and http://www.statistics.gov.lk/GenderStatistics/StaticalInformation/WomenEmpowerment/Membersofparliamentbyyearandsex

Female candidates entering the Sri Lankan political arena tend to face more obstacles than their male counterparts. They often have insufficient financial resources to run the large-scale political campaigns that many leading Sri Lankan male politicians undertake. While the lack of funds can be due to various reasons, prevailing gender-wage gaps also play a significant role in hindering employed women, which often has adverse impacts throughout their life. In addition, social and cultural biases that tend to undermine the capability of women as governing authorities also contribute to the lack of external financial backing for women.

Higher expectations placed on the role of females as caregivers and the notion of politics as ‘dirty’ or corrupt tend to discourage women from engaging in politics. Further, the tedious work, travel, and long hours involved are barriers to maintaining a good work-life balance. Finally, having their lives often subject to public scrutiny, especially as women are judged more critically for partaking in a male-dominated field, is an added deterrent.

Overcoming the financial barriers – Development of skills like public speaking and training on fund-raising should be provided for youth as these are skills anyone can benefit from, irrespective of their chosen field. Allocating a certain minimum amount of funds within a political party solely for women representing the party is one option to overcome this obstacle to some extent. However, this is not a complete solution to the problem. Introducing regulations on campaign financing such as controls on how much can be spent per campaign is an added measure to ensure that financial limitations do not discourage participation.

Overcoming the social/cultural barriers – Measures must be taken to educate men and women on the importance of breaking free from traditional gender roles, stereotypes, and discrimination that prevent women from entering politics. Females should be empowered and encouraged to take up leadership roles from a young age. Existing women in government can also mentor others to follow in their footsteps. Providing the necessary tools and guidance is crucial for new candidates interested in public service with no prior knowledge or political affiliations.

Recognising women’s contributions and potential – Misconceptions undermining the value of female contributions in politics should be broken down by advocating for equal representation. The public must be made aware of the importance and necessity of diversity in government to make educated choices as voters. Existing women – and men – in government can formulate legislation to ensure diversity and equity in governance. The introduction of a reserved seat quota of 25%  during the 2016 local elections increased the number of women elected from 89 to 2,300. The introduction of a gender quota at the national level can encourage more women to run for office and improve female representation in the Sri Lankan Parliament. Men alone cannot make laws for society at large. Women should have an equal say in politics since a gender-balanced Parliament contributes to more effective and informed decision-making.

For example, in 2021, the Moroccan government introduced gender quotas for women to hold positions on the board of publicly traded companies. This promoted balanced representation in business and encouraged female leadership, as evident from the 2021 Moroccan elections resulting in the country electing its first female Minister of Finance and three female leaders in major cities. As such, continued visibility of female leadership contributes to uplifting women to aim for inclusivity in historically male-dominated sectors.

The global population continues to promote female legislators and encourage diversity in politics. Sri Lanka, too, needs to welcome more women in leadership and political spaces to break the bias in politics. Doing so is the only way to ensure inclusivity, equality, and genuine democracy.

Lakshila Wanigasinghe is a Research Officer at IPS with research interests in poverty, social welfare, development, education, and health. She holds an MSc in Economics with a concentration in Development Economics and a BA in Economics with concentrations in International, Financial and Law and Economics from Southern Illinois University Carbondale (SIUC), US. (Talk with Lakshila - lakshila@ips.lk)