COVID-19 and the Sri Lankan Economy: Policy Choices and Trade-offs 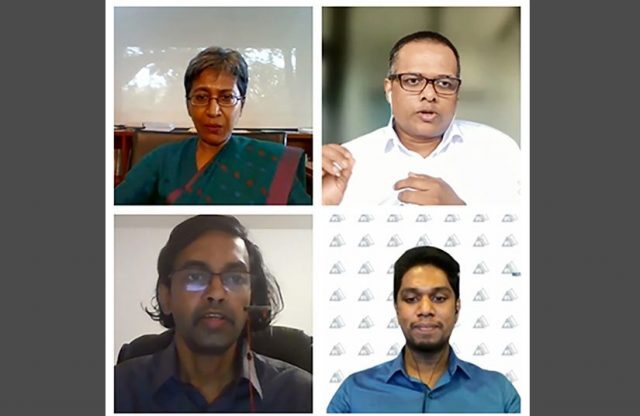 A V-shaped recovery is likely to take shape, but Sri Lanka faces a relatively weak output growth. A critical challenge is to lift the growth rate to, at least, 5-6% and maintain that momentum in the medium term. How investments perform will be a crucial determinant, as the dip in investment was a major driver of output contraction in 2020. With little fiscal space, Sri Lanka relied mostly on monetary policy. There was a surge in direct financing of fiscal spending, and there were efforts to ensure that borrowing costs were kept low via yield-control measures.

Sri Lanka is not so fortunately placed when considering the risks related to large-scale debt monetisation programmes due to high debt levels, elevated exposure to foreign debt with repayments of sizeable amounts in the medium term, and the low reserve stockpiles. With such weak fundamentals, the backbone of debt monetisation programmes is policy credibility. But for the last 18 months, there has been no notable effort to curtail discretionary spending and anchor fiscal plans. Thus, Sri Lanka is reluctant to deal with IMF conditionalities.

Policy measures must address fiscal imbalances through cuts in national spending or raising national income. As the latter takes time, the governments tend to focus on a policy mix to cut national spending that includes tighter budgets allowing interest rates to move with market fundamentals and implementing more flexible exchange rates. The downside is that the growth suffers in the short term with worsening debt ratios. These are politically difficult choices when economic conditions are tight as they are now.

Sri Lanka must firm up its access to foreign capital markets to balance the risks. If Sri Lanka comes to an adjustment on the fiscal front and improves access to capital markets, this will free up the space for a more orderly macroeconomic adjustment. Though the exchange rate may initially overshoot, it can be stabilised over time. This will allow the Central Bank to reverse its debt monetisation and focus on price stability, as that will be an area of concern in the coming months. A policy framework along these lines will provide a more robust environment to support investment and sustain Sri Lanka’s recovery.

During the pre-pandemic period, there was stabilisation in the rate of globalisation, but Sri Lanka’s openness has continuously declined especially after 2005 due to GDP growth in nontradeable sectors. However, Bangladesh, India, and South Asia, in general, show an increasing trend of openness. COVID-19 led to a deep plunge in the world’s industrial production and trade in 2019. But even after this collapse, it recovered by the beginning of 2021. There is no evidence to show deglobalisation effects due to the pandemic.

When the world trade outlook is taken into consideration, the WTO predicts a pickup in global trade volumes for the year 2022. An IMF database that uses signals emitted by sea vessels also showed an uptick in world trade from the beginning of 2021. Sri Lanka should ready itself to take advantage of trade diversion and investments opportunities  the tariffs imposed on China’s textiles by the US, for instance. At present, its global value chain (GVC) participation is low and in fact declined from 2009 to 2019. In contrast countries like Bangladesh, Viet Nam, India and Pakistan showed an increasing trend. He pointed out that the US-China trade war presents opportunities for Sri Lanka to increase both forward and backward GVC participation.

A key challenge is the costly policy of import substitution, resulting in resource misallocation, reduced competitiveness, and possible retaliation from trade partners. Another challenge for Sri Lanka is the potential withdrawal of GSP+ which will be a hard hit on the seafood and textile industries. Sri Lanka should work to secure GSP+, disengage from the ‘anti-trade’ bias, integrate with GVCs, and restructure existing regional trade agreements.

Sri Lanka’s growth trajectory has not been in line with its true potential, adversely impacting the well-being of the people. This can be attributed to the low level of productivity growth. Although the manufacturing sector has contributed to growth, it has not demonstrated sufficient productivity that would enable the country to achieve a better output.

Further, the current fiscal difficulties can be pinned to structural imbalances in the country’s budgets that have spanned decades along with different administrations that have been unwilling to make hard choices. In the longer term, budgets must be structured to bring the debt down to a manageable level.

The world economy is moving away from physical goods to a digital-based economy, requiring greater provision of services. Sri Lanka scores well on the Human Development Index with its knowledgeable workforce. The need is to increase productivity by investing more in education and service-producing industries and improve the business environment by reducing institutional barriers.

Chathurrdhika Yogarajah is a Research Assistant at IPS with research interests in macroeconomics and trade policy. She holds a BSc (Hons) in Agricultural Technology and Management, specialised in Applied Economics and Business Management from the University of Peradeniya with First Class Honours. She is currently reading for her Master’s in Agricultural Economics at the Postgraduate Institute of Agriculture, Peradeniya. (Talk with Chathurrdhika: chathurrdhika@ips.lk)