Rising Price of Rice in Sri Lanka: The Roots and Remedies 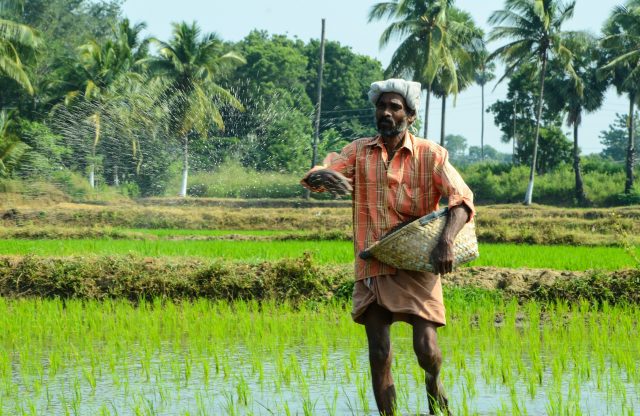 Rice is the dietary staple and the major domestic crop cultivated in Sri Lanka since ancient times. Therefore, the production and availability of rice are closely tied to food security as well as political stability in the country. Every government since independence has given prominence to the goal of achieving self-sufficiency in rice. Accordingly, a significant amount of resources are allocated for the supply of irrigation water, land development, research on technological improvements, farm mechanisation, and support facilities such as credit, subsidised inputs, and farmer welfare measures.

As a result, the cultivation of paddy and production of rice increased steadily with Sri Lanka reaching near self-sufficiency in rice and rice imports dropping to an insignificant amount. Despite these achievements, problems relating to the paddy and rice sector continue to occupy a foremost place among the country’s socio-economic issues. At present, supply shortages and rising retail prices have caused severe social unrest. In this background, this blog identifies the current problems in the rice sector and suggests some policy recommendations.

Demand and Supply Dynamics of Rice

Rice is an essential consumer good with inelastic demand in the local market and the consumption of rice is important not only to the economy but to Sri Lankan culture as well. Based on 2016 per capita consumption of 104.5 kg per annum, the annual national rice demand was 2.1 million MT which is equivalent to 3.2 million MT of paddy. After adjusting for seed paddy, processing, waste and other requirements, Sri Lanka needs to produce 4 million MT of paddy to fulfil the above national demand. No significant change in national requirement is expected in the near future due to the balance between gradual reduction in per capita consumption and population growth. The rice market has a delicate system of price determination that is associated with availability in the market. It is connected to seasonal harvests of Maha and Yala leading to high fluctuation of prices over certain months of the year. From January, the prices of paddy and rice decline gradually and reach their lowest in March with the major Maha harvest. It increases slightly from April and undergoes a minor slump during July-August when the minor Yala harvest reaches the market. The rise of the prices of all types of rice is quite sharp from September onwards reaching the peak in December and begin to decline again in January continuing the cycle. The difficulties faced by consumers due to a sharp rise in rice prices during September-January is one of the most politically sensitive issues in the country. Severe disruptions happened to this usual pricing mechanism in recent times by the cooperative decision making and anti-competitive practices of large and leading millers who have large storage facilities, purchasing power and economic stability. Farmers are inherently disadvantaged in the market because a large number of farmers sell their harvest at the same time due to lack of capacity to store paddy and credit bound relationships due to up-front capital requirement for uncertain several months.

Cooperative decision-making by large millers who handle a sufficiently large (about 33.8%) share of purchase in the paddy market gain an oligopolistic advantage by releasing large stocks of rice to the market during the harvesting period to create a glut so that they can purchase paddy at minimum prices. Also, their anti-competitive practices such as exclusive supply agreements, horizontal cartel practices and compelling farmers to sell paddy only to them prevent small scale millers from purchasing paddy. Curtailing stocks thereafter create a scarcity of rice to maintain a high price till the next harvest period.

Different command-and-control methods such as adhoc price controls and emergency regulations were used by successive governments to control the market. These were easy to enact, yet have proven ineffective. Therefore, measures that provide facilitation, monitoring, and regulation should be the key strategies of the government in both the rice and paddy markets while allowing market forces of supply and demand to determine prices.

Promoting competition is the key to constrain the oligopolistic market power enjoyed by the large millers. However, small and medium millers will find it difficult to survive in the market due to strong competition from the successful, large ones that dominate the space with wide-ranging products including premium and mass markets. Thus, small and medium millers should be empowered through credit facilities to buy paddy and to upgrade their mills to achieve economies of scale and production cost advantage.

Further, organising them under a suitable collective business model such as cooperatives will facilitate competition while providing a sustainable solution. In the meantime, as a short-term measure, the Paddy Marketing Board (PMB) can increase its purchases so that these can be milled by small and medium millers on a quota basis and distributed through Sathosa.

While the Consumer Affairs Authority Act, No. 09 of 2003 was designed to control anti-competitive practices that harm consumers, this is constrained by resource limitations and information asymmetry. This can be minimised by establishing a market information system with mandatory reporting under Section 12 of the Paddy Marketing Board Act No. 14 of 1971 which provides for recording data on production, sale, supply, storage, purchase, distribution and milling of paddy and rice.

Other than the anti-competitive practices, the cost of production of paddy and bargaining power are also factors that determine the price received by farmers. Modern technologies should be promoted to optimise the input use so that the cost of production could be minimised. The current policy drive on organic farming could be rationalised to reduce the dependency on costly imported inputs such as chemical fertiliser and agrochemicals gradually.

Small-scale farmers should be organised under suitable operational units such as The Japan Agricultural Cooperatives (JA) so that their farming efforts are coordinated and consolidated to increase their collective bargaining power. Decisions on rice importation should be based purely on market conditions given by the proposed market information system. These strategies can stabilise the prices of paddy and rice without severe fluctuations and make paddy farming a viable livelihood with a sustained income for small-scale farmers.