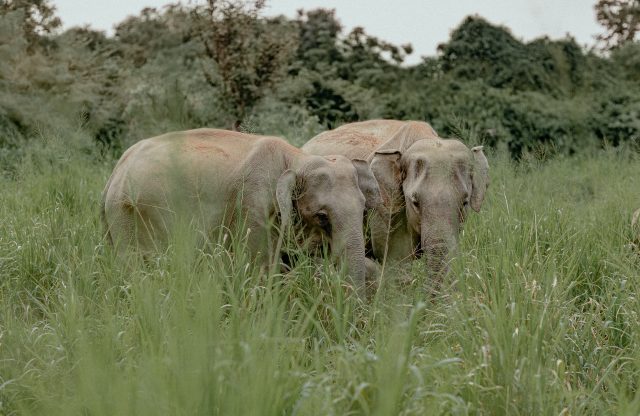 In 2019, Sri Lanka recorded the highest reported elephant deaths and second highest number of human deaths in the world due to the human-elephant conflict (HEC). Each year, the reported number of crop losses, property damage, and human and elephant deaths continue to be considerably high. These numbers could be even higher due unreported cases. Regardless of the immediate causes of individual incidents, the growing competition between humans and elephants for living space is the main underlying reason for many such incidents. The government’s National Policy Framework ‘Vistas of Prosperity and Splendour’ has paid considerable attention to this pressing problem, and a dedicated state ministry has been established to look into the matter as a priority issue.

Sri Lanka is home to a significant population of Asian elephants. The most recent survey conducted by the Department of Wildlife Conservation (DWC) in 2011 reported a wild-elephant population of 5,879. The population comprised of 1,107 calves, 4,650 grown-up elephants and 122 tuskers. The highest number of elephants were reported from the Mahaweli region (1,751) followed by the Eastern (1,573), North Western (1,189), Southern (1,086), Northern (233) and Central (47) regions.[1] The dry zones of the island are the habitat for a majority of elephants. Sri Lanka has allocated approximately 13% of the total land area as protected areas (PAs) for wildlife conservation to provide shelter for elephants and other wildlife species. The DWC and the Forest Department (FD) are the two main agencies responsible for managing the PAs. It has been observed that a significant number of elephants roam outside the range of PAs. According to one estimate, the total area range of elephants falls over 70% of Sri Lanka’s land extent.

Existing data suggest that 5.7 million people (27% of the population) living in 142 Divisional Secretariat Divisions (DSDs) in 19 districts of the country are affected by HEC. The conflict is most intense in the North Central, North Western and Eastern Provinces while incidents are regularly reported from the Southern, Northern, Uva and Central Provinces, too. HEC results in both direct and indirect losses to humans. The impact on humans can be identified under four major categories, namely; loss of lives, injuries, property damages and crop losses. Among these, human deaths and injuries are the most severe. Between 2006 and 2017, a total of 964 human deaths and 906 injuries have been reported (Figure 3).

During that period, on average, 80 people were reported dead and 76 people were injured annually. DWC data indicate that on average, 1,331 incidents of property damage per year have taken place during the same period (Figure 2). Elephants often attack many types of crops cultivated in paddy fields, chenas and home gardens. Despite the absence of statistical evidence, the frequency and the intensity of crop-raiding by elephants as well as economic losses appear to be on the rise. On the other hand, the lives of elephants are severely threatened by HEC. Farmers resort to various illegal measures such as using explosive devices and gunshots to attack elephants. A total of 2,631 elephant deaths were reported during 2010 and 2019 which can be considered as a high number. These are cases which were reported, while the number could be much higher owing to unreported cases.

The conventional measures for mitigation of HEC include both voluntary measures taken by affected farmers as well as those implemented with institutional support. Among the institutional measures to support the affected communities are erecting electric fences, chasing problem elephants into protected areas, creating elephant corridors, distribution of crackers and flares among vulnerable communities and research into alternative cash crops. The limited success of these measures has led the victimised communities to resort to illegal and hostile responses such as attacking elephants with guns and explosive devices and use of poisons. It is no secret that these measures have failed to deliver a sustainable solution. Insurance as a market-based solution for HEC

Agriculture insurance schemes are among the institutionally initiated mitigative measures and as such, are not new to farmers. In terms of the scale of coverage of such schemes, on average, less than 4% of Sri Lanka’s total paddy cultivated area is found to be covered by both government and private indemnity-based crop insurance programmes during 2003-2015. In 2013, the government introduced a compulsory crop insurance scheme bundled with the fertiliser subsidy programme, which covered elephant damages also as one peril among others, albeit, for a limited number of crops.

The Institute of Policy Studies of Sri Lanka (IPS) has partnered with the International Institute for Environment Development (IIED), UK to explore the prospects for introducing insurance products specially designed to address HEC. This is an international study to be piloted in Sri Lanka and Kenya, another country severely affected by HEC, with the financial support of the Darwin Initiative, UK. During consultations conducted in the HEC zones as a part of the pilot testing study, villagers complained about previous unfavourable experience with insurance schemes offered by government institutions. Farmers highlighted difficulties encountered in processing claims and the limited coverage of existing schemes. The prevailing crop insurance schemes have mainly been designed to cover climatic risks, i.e. droughts and floods. Even though wild elephant risk is also covered by these schemes, the policies were not designed to capture specific risks and vulnerabilities associated with wild elephants – in other words, the insurance scheme is not serving the purpose.

Limitations in existing insurance schemes have created mistrust among farmers. Therefore, a novel insurance scheme which captures the needs of farmers while also offering a viable business opportunity for insurance providers should be introduced. This is a challenging task. Some challenges in areas such as affordability of premiums, verification of crop losses, and claim settlement can be identified as implementing challenges for specific insurance schemes to cover risks caused by wild elephants. The difficulty of monitoring and verification of crop losses can be identified as a major challenge. Figure 5 provides a summary of challenges that need to be countered from the viewpoint of both farmers and insurance providers. The above challenges indicate that insurance products that are specially designed to address HEC are required. A new product that can address all or many of the above challenges will require careful designing. Moreover, such a product should be implemented first at a pilot level involving a limited group of villagers to identify practical issues associated with it, before scaling up to a wider group of beneficiaries. Such an insurance scheme will have a greater impact if offered as a part of an integrated solution strategically combined with other mitigation measures such as electric fences.

[1] A gross assessment based on multiple sources.