Meeting Challenges in a New World of Work: How Prepared is South Asia for the Fourth Industrial Revolution? 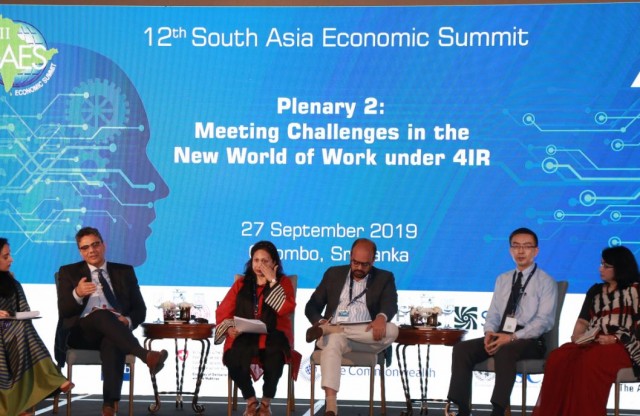 One of the plenary sessions at the 12th South Asia Economic Summit (SAES XII), organised by the IPS, deliberated on how best to meet emerging challenges in a technology-led, new world of work, in the Fourth Industrial Revolution (4IR). Moderating the session, Senior Fellow at the Indian Council for Research and International Economic Relations (ICRIER), Radhicka Kapoor, noted that the rapid pace and the magnitude at which change is occurring in labour markets impact individuals and countries in different ways. She also noted that the current narrative on the future world of work is skewed towards developed nations, and identified two key challenges specific to South Asia: (1) being trapped in a low-productivity agriculture sector, with limited avenues for structural transformation; and (2) the presence of a large informal sector, consisting of low-productivity and low-paying jobs, which are likely to become the norm rather than the exception with emerging new forms of employment.

While acknowledging the many opportunities offered in the 4IR era, Dr. Kapoor stated that how well South Asia harnesses these opportunities will depend on policy responses, given that parts of the region are yet to experience dividends of the first three industrial revolutions. The panellists discussed how South Asian labour markets will be impacted by the 4IR and what the required policy responses should be in the evolving world of work.

Professor at the Quaid-i-Azam University, Aliya Khan, noted that while there was ample discussion on the shift in required skills from manual and repetitive to cognitive and socio-behavioural ones, the discourse should focus on how the impacts of 4IR will actually change the dynamics of the labour market and which specific sectors would be affected the most. In this context, she highlighted the need to analyse technology absorption potential for each country and for research that quantifies possible impacts of job creation and losses. She further lamented that none of the South Asian countries has comprehensive policy documents geared towards addressing challenges in the future world of work.

Regional Economic Advisor of the Asian Development Bank’s (ADB) South Asia Department, Lei Lei Song, also advocated for analysing the capability to absorb technology to figure out where each country stands. Differentiating between product and process innovation, the former which is labour augmenting and the latter labour saving, Dr. Song said that distinguishing between the two will help countries best use each technology to their advantage.

Chairman of the South Asia Watch on Trade, Economics and Environment (SAWTEE), Posh Raj Pandey, opined that given the cost of replacing individuals with technology, a more practical threat of the 4IR for the region could be the rising discrimination against specific population groups and polarisation in terms of job distribution – as opposed to mere job losses. He also drew attention to the increasing disconnect between economic growth and employment creation, where rising levels of capital contribution, combined with declining levels of labour contribution, leads to widening inequalities. He noted that maximising employment, instead of economic growth, should be placed at centerstage and advocated for a sound digital industrial policy to which public finances should be aligned.

The Founding Director of TANDEM Research, Vikrom Mathur, echoed similar thoughts, stressing the need to pay attention to the level of polarisation brought about by technology. In Sri Lanka and India, for example, while the financial and information technology sectors will see an increasing amount of new jobs being generated, most entry-level ones will be automated. Further, large technology companies can become established as monopolies, with potential for exploitation of low-skilled and less advantaged workers, he warned.

Executive Director of the Centre for Policy Dialogue (CPD), Fahmida Khatun, said that in order to adapt successfully to changes and take advantage of technology as a productivity booster that facilitates work and improves lives, active labour market policy measures that can produce individuals with the right education and skills sets to face the 4IR are needed. She emphasised the need for education policies that move beyond mere numbers, such as enrollment rates, to those focusing on quality, including lifelong learning skills, given that most skills currently imparted by South Asian education systems fail to cater to market requirements. Doing so requires more public expenditure on education, as well as better resource mobilisation, she stressed.

Similarly, with regard to employment, Dr. Mathur asserted that the focus should move beyond job numbers to quality and conditions of work. For instance, while Uber and other platforms in the gig economy offer jobs, there are often no labour laws, minimum wage regulations, or pension schemes protecting workers. He cautioned that standards may drop further as technologies can significantly undermine the formation of unions and workers’ bargaining power.

The Importance of ‘Basics’

Dr. Song stressed the need to ‘get the basics right’ in meeting 4IR-related labour market challenges and making technology and innovation work to the region’s advantage. He identified bloated public sectors, the lack of competition, and the limited scope for private sector development as constraints in South Asia, which inhibited economic growth and job creation. He also highlighted the need to find the niche to exploit one’s comparative advantage in the 4IR, and called for more open economic policies and fostering of private sector development to reap benefits.

There was general consensus at the session that the ability for South Asia to deal with multifaceted challenges and harness emerging opportunities in the future world of work depends crucially on the urgent formulation of a decisive path and plan in preparation for the 4IR. The most pressing priorities identified include more in-depth labour market diagnostics analysing actual and potential 4IR impacts, better formulation of education and labour market policies with more focus on quality and protection of vulnerable employees, placing emphasis on employment maximisation to avoid widening inequities and related threats, and fostering an open economy with more private-sector participation.