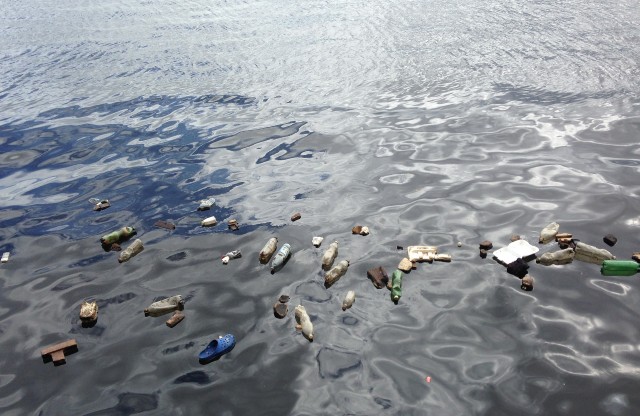 If current marine plastic pollution trends continue, the ocean will contain more plastic than fish by 2050, predicts the World Economic Forum report The New Plastics Economy. The Ocean Conservancy estimates that over 150 million metric tons of plastic are currently circulating in the ocean, while another eight million metric tons are added annually. The study emphasises the severity of this issue, equating it to dumping a truckload of plastic into the ocean every minute, of every day, for a year. In 2016, South Asia generated 26 million tonnes of plastic waste and unsurprisingly, this has led to the creation of a “dead zone” – an area where oxygen levels are too low to sustain marine life – in the Bay of Bengal.

Marine plastic pollution originates partly from waste dumped by marine vessels and offshore gas/oil rigs, but a vast majority, almost 80% is from land-based sources. This blog argues that the solution to the rising problem of land-based marine plastic pollution in Sri Lanka is a combined force of banning single-use plastics, proper waste management, and the use of sustainable ecofriendly alternatives.

A grave consequence of marine plastic pollution is that many marine species become victims, often ingesting plastic debris that harm or kill them. This also transfers harmful chemicals and microplastics to humans, as approximately around 3 billion people rely on seafood as their primary source of protein. A Belgian study calculated that consumers of shellfish could be eating almost 11,000 plastic fragments annually, while another study identified that one third of UK’s fish contain some form of plastic. This threat is not limited to Europe; contaminated fish have been found across the globe from the Americas to Asia, indicating that this is a pertinent global issue. Studies have also shown the presence of microplastics in Sri Lankan oceans.

Moreover, humans are also absorbing other toxic substances, such as metals and pesticides, that easily latch on to the surface of plastics. Often, marine creatures are unable to distinguish between plastic and food, while new research shows that plastics attract a form of algae growth that is an alluring meal for sea creatures. Many of the chemicals identified, accumulated on microplastics, pose a significant threat to human health, affecting the functions of the liver, kidneys, and endocrine glands, in addition to being carcinogens.

This issue is a cause for concern for the island nation, as a significant population are dependent on the fisheries industry for their livelihoods. Approximately 221,000 fishermen contribute to around US$ 130 million worth of fish exports, making up 1.3% of the country’s GDP. The Ministry of Fisheries reports that there has been a rise in the per capita consumption of fish by local consumers and that fish contributes to around 55% of total protein consumed in the country. The report predicts a 2.4% growth in the consumption of fish among locals citing the nutritional benefits of fish consumption with Omega-3 fatty acids, Vitamins D and B2, and Calcium.

Sri Lanka’s first attempt to control plastic usage began as early as 1994, when a gazette was issued by the Ministry of Environment, banning polyethene, which failed to be implemented. A second attempt in 2006 and a third attempt in 2017 sought to ban the production and the use of polyethene sheets, polystyrene based packaging and cutlery, and the burning of plastic and other similar combustible material. However, the Sri Lankan government struggled to implement policies restricting the use of plastic, succumbing to pressure from plastic manufacturers and retailers. The Centre for Environmental Justice attributes the failure to the lack of stringent enforcement mechanisms by the government and the Central Environmental Authority (CEA).

On a positive note, the Sri Lankan government has successfully introduced the concept of garbage segregation, separating plastic and polyethene for recycling; a small step towards effectively combatting marine plastic pollution. The 2019 Budget offers hope, as a proposal was made to substitute single-use plastics with alternatives by 01 September 2019. Sri Lanka has also joined Britain, New Zealand, and Ghana to form the Commonwealth Clean Oceans Alliance (CCOA), in an effort to fight plastic pollution. The CCOA pledged €61.4 million in funding to boost research across Commonwealth countries in combating plastic pollution and conserving the marine environment.

Banning plastic in Sri Lanka is a contentious issue met with strong resistance from the general public. The resistance is twofold; first, from consumers who are reluctant to change, as plastic has become an integral part of their daily lives and second, from plastic manufacturers who produce around 120,000MT of plastic, equivalent to US$ 55 million annually.

From history, it is apparent that the government did not put adequate efforts to providing the public with suitable alternatives to plastic. Simply imposing regulations and bans have no effect in solving the issue. Legislation should be present to push organisations and citizens towards responsible production and conscious consumption.

One of the major concerns of the consumer is that plastic substitutes do not offer the same affordability and convenience as using plastic. However, with new technological advances and developments biodegradable substitutes are now able to match the functionality of plastic.

Solutions to the Plastic Problem

Sri Lanka’s South Asian neighbor, Bangladesh is developing the “Sonali bag”; a biodegradable alternative to polythene bags made of jute cellulose. However, a lack of funding has prevented mass production. Similarly, organisations have invested in developing biodegradable products around the world; from containers that are 100% edible to packaging made of mushroom roots that have the same quality and functionality as foam/plastic packaging.

To combat the problem of plastic in Sri Lanka, the government should work collaboratively with the private sector and the public in developing strong policies, which cover legislation banning the use and production of plastic, education that encourages the public to recycle and manage waste appropriately, funding and supporting research and development towards designing bio degradable alternatives.