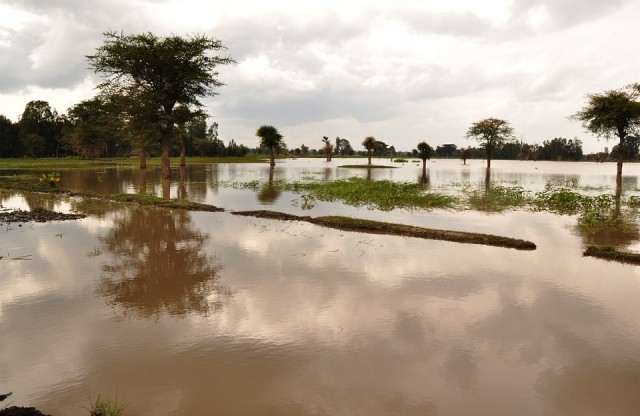 As several districts in Sri Lanka continue to recover from the prolonged drought last year, recurring floods and landslides hamper economic activities in the country. Sri Lanka was ranked as the second most affected country by the impacts of weather-related losses in 2017, according to the Global Climate Risk Index 2019. Worryingly, the country’s situation has worsened since 2016. This highlights Sri Lanka’s vulnerability to climate impacts and the need for effective policies. The good news is that the 2019 Budget proposes several measures to improve Sri Lanka’s disaster resilience, as shown below. When it comes to natural disasters, it is the agriculture sector that is hit the hardest. The total damages and losses in the sector, due to floods and landslides in 2016, were estimated to be nearly Rs. 3.6 billion, according to the Post Disaster Needs Assessment (PDNA). The estimated cost for the loss of paddy alone was Rs. 553 million. The districts of Jaffna, Anuradhapura, and Mullaitivu – where communities heavily rely on farming – were the most affected. Meanwhile, a survey carried out in the Anuradhapura district revealed that climate-related disasters and rainfall uncertainties are prominent among a number of risks/uncertainties faced by farmers. As a result, 2019 Budget proposals provide a more secure supply of water for agriculture through multi-purpose development projects, canal construction projects and rehabilitation of tanks. Management of Disasters: Challenges and Gaps

Frequent natural disasters call for an efficient mechanism for Disaster Risk Reduction (DRR) in Sri Lanka. There have been notable improvements in disaster risk management over the years; considerable progress has been made to shift focus from post-disaster measures to improve preparedness to face disasters. However, Sri Lanka’s recent experiences with natural disasters indicate that several areas of DRR are lagging behind, specifically, the ‘preparedness’ component which has not received due attention; disaster relief mechanisms, including disaster compensation, showed notable inefficiencies, as noted during the floods in 2017.

In addition, gaps were observed in Sri Lanka’s early warning system. Disaster forecasts are particularly important to the agriculture sector, as livelihoods are directly affected by weather patterns. Despite existing communication systems for early warning dissemination, there are issues in providing localised warnings to vulnerable communities. The absence of a proper mechanism at ground level is an issue. Disaster experiences in the last few years show that vulnerable communities were not adequately prepared to take heed of these early warnings.

The lack of disaster information is a key barrier in conducting assessments for effective policy formulation, guiding DRR activities, and achieving disaster resilience in Sri Lanka. Information can be in the form of loss and damage assessments, research findings, hazard and vulnerability assessments, disaster forecasts, early warnings, and weather data. Data on losses and damages are particularly important to understand the economic impacts of disasters.

The Desinventar database, managed by the Disaster Management Centre (DMC) is the only available source for disaggregated data. However, it does not encompass all the vital information needed to formulate DRR tools and garner disaster-related investments. As the draft National Disaster Management Plan (NDMP 2018-2030) highlights, there are notable gaps in terms of research-based information on natural disasters.

While early warnings and disaster relief mechanisms are vital in reducing the impacts of disasters, mitigation and preparedness remain the key strategies for reducing the impacts of disasters. This is especially relevant to floods and landslides as they have a higher economic cost, when compared with droughts. The draft NDMP 2018-2030 points out that the investments on structural measures, intended to provide physical protection from disasters, are low in Sri Lanka. Certain initiatives are in place in mitigation aspects. The Climate Resilient Improvement Project has a component which supports the implementation of such investments to ensure short-term integrity of flood control and irrigation infrastructure.

Improving the local capacity to deal with disasters is vital for enhancing the effectiveness of early warning and disaster relief mechanisms. Such improvements can minimise the disaster related social costs, such as mortalities and injuries. Further, issues in the relief system should be eliminated to meet immediate basic needs of the disaster victims. This requires the formulation of a proper relief system, with clear criteria for relief distribution.

Effective DRM should be supported by timely and comprehensive climate information. The existing gaps can be eliminated to a great extent by developing a repository with online facilities to compile and share data among key users. The sharing of research-based information helps to integrate such information to decision making.

At the policy level, the need of the hour is to mainstream disaster resilience efforts when formulating and implementing development projects. Suitable policy and planning guidelines are crucial in this regard. The National Physical Planning Policy and the Plan 2050 (draft), takes disaster risks into account and can serve as the basis for development projects at the national level. Disaster related aspects can be introduced at the initial stages of planning and obtaining approvals for projects. The Initial Environment Examination (IEE) and Environmental Impact Assessment (EIA) should be revised to include elements of disaster resilience. Proper integration of DRM aspects into planning will also enhance investment decisions on disaster resilience.