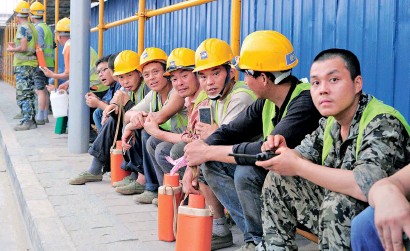 This is an apparent reality in the local labour market; the Sri Lankan economy is gradually transitioning from a mere labour sending economy into one that both sends and receives workers. The same employment opportunities, working conditions, and demand and supply conditions that necessitated outmigration of Sri Lankans workers is now attracting foreign workers in to Sri Lanka. The only difference here is the relative point of reference of each group. In the eyes of Sri Lankans like Kamal, the local opportunities pale in comparison to those available in destinations such as Saudi Arabia, while from the point of view of Chinese immigrant workers like Hong Chua, the opportunities in Sri Lanka are rosy compared to their opportunities in the country of origin.

From Sending to Receiving

In recent years, the gradual rise in immigrant workers in Sri Lanka coincided with the decline in the departure of Sri Lankans for overseas employment. In fact, worker departures from Sri Lanka have been experiencing a downward trend since 2014, and have dropped to 212,162 departures in 2017. At the same time, issuance and extension of resident visas for foreign nationals to reside in Sri Lanka have been on the rise to reach 53,583 in 2017 from 41,306 in 2014 (Figure 1). Figure 2 suggests that nearly 60% of resident visas or the approximate 30,000 issued/renewed in 2017 are for employment purposes. Additionally, there may be other lawfully residing foreigners who would have obtained or renewed their visas for employment before 2017. The limitations of the existing Act include the absence of a separate visa category to facilitate employment of foreign nationals, the inability to allow the domestic labour market to benefit from the large proportion (16% of resident visas) of foreign students that reside in Sri Lanka, and not facilitating family members of diplomatic and employment purpose resident visa holders to contribute to the local labour market.

Along with an updated Act to govern immigration in to the country, Sri Lanka also needs a matching institutional framework to ensure efficient and foolproof operation of related activities, such as ensuring employers do not penalise native workers, authorisation of work permits, validation of foreign qualifications, experience and credentials, and continuous monitoring of foreign workers in Sri Lanka in terms of aspects such as their welfare, health, integration to the local society, and return to their country of origin at the end of their working period.

As such, new laws, regulations and institutions that are being drafted at present ought to be sufficiently forward thinking to take Sri Lanka beyond the incipient beginning of immigration to all the way across the migration transition phase and to a possible scenario of net immigration. The country cannot afford any weakness in the institutional framework in immigration to foster a breeding ground for hostility and friction between natives and foreign born workers.