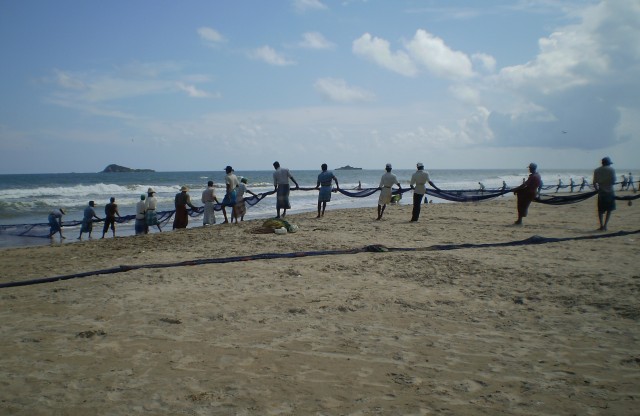 Droughts, floods, landslides, and cyclones have frequented the Sri Lankan newspapers in 2018. From February to March this year, nearly one million people in six provinces in the country were affected by a severe drought, according to Sri Lanka’s Disaster Information Management Centre (DIMC). In May 2018, floods and landslides, triggered by the Southwest monsoon rains, adversely affected 1,537,122 people in 19 districts. The ongoing heavy rains are again causing floods and disrupting livelihoods. Climate change and related vagaries of weather have increased the vulnerability of the Sri Lankan population to natural disasters. Rural households and livelihoods are more affected by such calamities (Figure1), which increases the risk of rural families sliding into poverty. Therefore, improving the quality of jobs and livelihoods of the rural population is important to build these communities’ capacity to withstand such natural disasters. According to the Labour Force Survey 2016, of the 20.7 million population in Sri Lanka, 17 million (or 82 per cent) reside in the rural (16.1 million) and estate (0.9 million) sectors, implying that despite urbanisation and rural to urban migration, the rural economy remains an integral part of the economy. The rural and estate sectors are home to 92 per cent of the poor in the country. In addition, a large proportion of the population, mainly in rural areas, lives just above the poverty line, making their situation precarious when disasters strike. Rural employment is dominated by agricultural employment. In 2016, 30 per cent of those employed in the rural sector were engaged in agriculture, compared to only 5 per cent of employed in agriculture in the urban sector. However, despite the dominance of agriculture-based livelihoods, the non-agricultural sector is the main source of employment in rural areas.

Better jobs are created in well-functioning labour markets. Such labour markets are efficient, fair and are concerned about the welfare of the workers. According to the International Labour Organisation (ILO), a labour market is said to be efficient if all workers who wish to participate can find jobs that are suitable, given their education, skills and experience levels. The labour market is fair, if the available jobs pay the workers a wage that is commensurate with the contribution of the worker. A well-functioning labour market also provides social protection from the loss of income due to some adverse shocks, by allowing them to find a new job quickly or by providing assistance while they find a new job.

Employment in the rural sector, on the other hand, is characterised by low quality employment. A majority of vulnerable workers — who are not covered by social protection, such as paid holidays, paid sick and maternity leave, and pensions — live in rural areas. For example, 95 per cent of the self-employed, agricultural workers and 90 per cent of the contributing family members are in the rural sector. Further, agriculture activities are seasonal, which makes it harder for employers to provide work throughout the year, leading to informal employer-employee relations in the rural sector. Sri Lanka has three main pension schemes aimed at informal workers engaged in agricultural, fishing, and self-employment activities, administered by the Agricultural and Agrarian Insurance Board (AAIB). Several studies have highlighted the inadequacy of these schemes. For example, a recent IPS study shows that the pensions scheme for the farmers only cover 38 per cent of them. Further, the benefits from these schemes were all under the poverty line.

How to improve the quality of rural employment?

Studies for other countries show that education and skills, research and development (R&D), rural infrastructure, and irrigation can improve productivity of rural economic activities by reducing transaction costs and enabling greater access to input and final markets.

Education and skills are directly linked to better employment. But, people in the rural areas are often less educated and less skilled. Even in Sri Lanka, where education in public institutions is free, the quality varies widely between the rural and urban areas. Access to high quality and relevant education facilities can help increase productivity in many ways. This is especially the case in today’s fast changing market place, and in the face of climate-induced, varying weather patterns. Better educated persons are able to access and process information better and manage their resources to make the best use of available market opportunities.

R&D activities in Sri Lanka are constrained by many factors. Although there are several institutions conducting research on various aspects in the country, these are poorly resourced and research outputs are limited. Even developed research does not always reach the potential beneficiaries, or even when they do, these beneficiaries are unable to make use of research findings due to the lack of funds and other resources. As revealed at a recent workshop on Climate Resilient Jobs, organised by the ILO, although funding is available for relief efforts, once a disaster happens, little money is at hand to mitigate damages caused by disasters. Well-targeted and practical R&D and effective dissemination can improve the ability of farmers to respond to changes in the weather.

On a positive note, rural infrastructure has been upgraded in the last several years. This has a direct impact in improving productivity of rural enterprises. The road network in Sri Lanka has developed considerably in the last couple of decades. This improvement is evident in all types of roads, indicating better connectivity within the urban areas, as well as between rural and urban areas. Access to electricity in Sri Lanka is very high. In 2016, 96.9 per cent of the houses used electricity for lighting purposes. Information and communication technology (ICT) is being used increasingly to give information to farmers on agricultural practices and markets, although its use can be further widened.

Despite these developments, knowledge and services that could improve operations of enterprises do not reach rural workers. For example, R&D activities carried out by the research institutions on improving productivity and resilience of crops often do not reach the rural farmers. A study by Prasanna Perera, on the tea smallholder sector in Walapane region in the Nuwara Eliya District, conducted in 2012, shows that a majority of the smallholders surveyed do not test their soil before determining its fertiliser needs, a practice proven to improve value addition of tea according to the Tea Research Institute (TRI). As such, the productivity of their lands is not even close to reach its potential.

Many agricultural areas in the country are irrigated, which makes them less susceptible to the vagaries of weather. But, there is potential to improve access to irrigated water. In the 2016/2017 Maha season, close to a half of the sown extent received water from major irrigation schemes (48 per cent), while the rest received water from rains (32 per cent) or minor irrigation schemes (20 per cent).

With more than 82 per cent of Sri Lanka’s population, including 92 per cent of the poor, living in rural areas, developing the rural economy is necessary to help them withstand the vagaries of weather and improve living standards. Better jobs are the best means of increasing earnings. The above discussion highlighted the importance of better education, better institutions, better infrastructure, and better coverage of social protection to uplift the livelihoods of the rural population. Such policy initiatives are especially important to improve the living standards of the rural population, in the face of climate change and frequent adverse economic shocks experienced by the rural population.