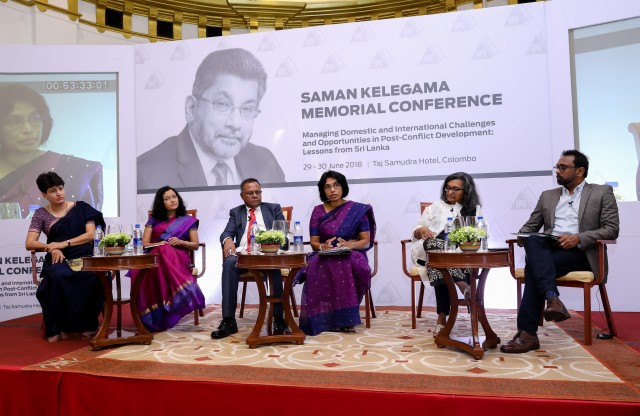 Sri Lanka’s post-conflict development trajectory has been a story of mixed results. In the aftermath of the conflict, Sri Lanka adopted many strategies to improve livelihood opportunities and reduce poverty and inequality, hoping to ensure harmony through better connectivity. Over the years, Sri Lanka has performed commendably in terms of reducing overall poverty; the poverty headcount rate has reduced from 8.9% in 2009/10 to 4.1% in 2016. However, there are significant regional disparities, especially in the case of previously conflict-affected districts. Kilinochchi, Mullaitivu, Batticaloa, and Trincomalee record the highest poverty rates in the country.

As such, the Session on ‘Smarter Development for Sustaining Peace’, at the Saman Kelegama Memorial Conference, dissected the strategies post-conflict Sri Lanka adopted to ensure inclusive and sustainable growth. It focused on the successes and failures of these strategies, in terms of facilitating smart development; i.e. ‘development that does not impede natural resources, is inclusive across all dimensions, and ensures social cohesions and economic productivity.’

Although Sri Lanka has performed commendably in terms of poverty reduction over the years, there are significant disparities across regions and population groups. IPS Research Fellow, Dr. Ganga Tilakaratna, identified two major sectors that have fallen behind in the country: a) the estate sector, and b) districts in the Northern and Eastern Provinces. These sectors are lagging behind in terms of access to services, with relatively high rates of poverty. Citing the map on the spatial distribution of poverty, published by the Department of Census and Statistics (DCS), Professor of Economics at the University of Peradeniya, Dileni Gunawardena opined that it is remoteness that causes inequality: there is regional polarisation, where the regions with higher poverty levels lack connections to regions that are more economically dynamic. As such, Prof. Gunawardena stated that, in the case of Sri Lanka, economic and social exclusion is a result of the lack of connectivity. Improving connectivity is a vital step towards addressing inequalities in the country. Meanwhile, calling attention to the differing causes of poverty among multifarious groups, Dr. Tilakaratna highlighted the need for more targeted and tailor-made solutions for poverty alleviation.

Livelihood revival in the post-conflict setting

Access to livelihood opportunities is key to alleviate poverty. As such, livelihood intervention strategies are central to ensure inclusive growth and sustainable development. This was evident in the immediate aftermath of conflict, when many livelihood related projects were carried out in the North and the East by various governmental and non-governmental bodies.

Executive Director of Centre for Poverty Analysis (CEPA), Dr. Udan Fernando, touted the Local Empowerment through Economic Development (LEEDS) Project, implemented by the International Labour Organisation (ILO), as a success story in reviving livelihoods in the conflict affected regions. Among the key success factors of the project identified by Dr. Fernando were, the selection of viable economic activities, the focus on value chain development, the scale of the project (medium to large, as opposed to the small scale projects introduced by many implementers), and the time taken to learn from mistakes and adjust the project as necessary.

An independent consultant, Dr. Ramani Gunatilaka, also referred to the LEEDS project, attributing its success to the time taken to identify the needs and the issues of the relevant areas and design the project as appropriate, as well as to the institutional structures set up to support the process. However, she noted that most livelihood interventions in the post-conflict North and East were designed to push or keep people in agriculture. This is especially problematic in the case of women who would prefer not to engage in a brawn-based industry like agriculture. As such, Dr. Gunatilaka highlighted the need for livelihood interventions to concentrate on the non-farming sector, while guaranteeing that they are market-oriented.

On a related note, according to Professor of Economics at the Griffith University, Jayatilaka Bandaralage, in the aftermath of the conflict, the government recognised tourism as a leading industry that could play a big role in the national reconciliation and re-integration process, while improving livelihood opportunities in the North and the East. As such, successive governments have launched comprehensive and ambitious strategies to develop the tourism sector, geared towards increasing the earnings from tourism and improving total employment in the industry, both direct and indirect. However, Prof. Bandaralage was of the opinion that the post-conflict tourism boom did not generate adequate benefits to the grass-roots; he identified the lack of relevant skills as a key reason for this.

To leave no one behind

As a signatory to the Sustainable Development Goals, Sri Lanka has committed to ensure inclusive and sustainable development that leaves no one behind. The session concluded that there is need for further action to address the inequalities and disparities among regions and population groups. The need for better targeted policies was highlighted in this regard. Livelihood interventions also have a key role to play in poverty alleviation. However, there is a need for these interventions to be formulated with a firm understanding of the grass-root level realities and from a long-term, sustainable point of view.

Chinthani Sooriyamudali was a Research Officer at IPS with research interests in poverty and development policy, econometrics and economic modelling, macroeconomic policy and planning, and international economics and trade. She holds BA (Hons) in Economics from the University of Colombo.