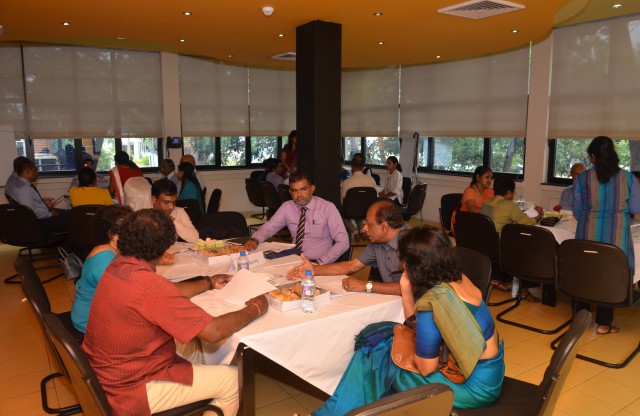 IPS hosted its first Policy Engagement Forum on Education and Skills for Prosperity: Building Networks for Bridging Knowledge Gaps recently, which was attended by a range of stakeholders in the education sector, including officials from the Ministry of Education (MOE), National Education Commission (NEC), National Institute of Education (NIE), universities, think tanks, and donors. The objectives of this forum were twofold: (1) to identify knowledge gaps regarding the constraints for improving the relevance and quality of education in Sri Lanka; (2) to build networks among different stakeholders to conduct collaborative research in bridging such knowledge gaps.

The Forum focused on four themes: education outcomes, equity in education, tertiary education, and education planning. Participants identified key constraints under each of these thematic areas and underlying causes, using a ‘Fishbone’ diagram that helps in identifying possible causes for a problem in a structured way. The discussions at the forum were facilitated by IPS researchers, Ashani Abayasekara, Nisha Arunatilake, Priyanka Jayawardena, and Sunimalee Madurawala.

An overarching concern voiced by many stakeholders was Sri Lanka’s current education environment; the examination based system and overloaded curricula cause undue pressure on students, starting as early as primary school. It was noted that relying on paper qualifications alone has resulted in children not being evaluated in a holistic manner. Dr. Sujata Gamage, Team Leader, Human Capital Research Program, LIRNEasia, said that exams should be just one component of student assessments, among others, such as common general tests, school-based assessments, and student portfolios. She stated that such demonstrative portfolios can provide students with alternate qualifications, even if they drop out of school at an early stage, to pursue a non-academic vocation.

Career guidance for students was also seen as lacking in our education system. Ms. Dileepa Wedage, from the University of Sri Jayewardenepura, opined that students need advice when selectingA-Level streams, particularly in rural areas, where parents are not aware of the opportunities available to children. In addition, it was noted that career guidance counselors need training and that psychological problems faced by students require more attention by educators.

Lack of properly qualified and trained teachers was identified as another key concern. Validating recent research by IPS, Prof. Prasad Sethunga, from the University of Peradeniya, pointed out that there is a need to increase the number of teachers with both subject and pedagogical training, offered via Bachelor of Education (BEd) programs. Currently only two out of our 17 state universities offer a BEd, producing a negligible 135 graduates annually.

Overcrowded class sizes were highlighted as another constraint to improving education outcomes, given the limited attention teachers could provide to students in large classes. Officials from the MOE noted that the Ministry has embarked on an initiative to reduce class sizes to 35 in all schools.

Inequities among schools, in terms of physical and human resources, access, and administration were identified as issues of concern. Confirming recent IPS research findings, it was noted that large disparities exist in school-level resources among national and provincial schools, as well as among different school types, based on functioning grades. The problem of an unequal distribution of teachers in terms of their qualifications and experience, with good quality teachers being concentrated in privileged schools, was also highlighted. Adequate incentives and support programs to attract good quality teachers to disadvantaged schools in rural areas were identified as crucial in addressing equity issues.

While more funding for education was deemed necessary to improve both education outcomes and equity, it was noted that substantial amounts of funds have already been allocated for the education sectorby the likes of the World Bank and the Asian Development Bank. The need to look at how effectively such funds have been utilized, before calling on more funds, was highlighted. With respect to tertiary education, limited enrollments in the Technical and Vocational Education and Training (TVET) sectorwas identified as a cause for concern. According to Dr. Sujata Gamage, who served as the Director General of the Tertiary and Vocational Education Commission of Sri Lanka, a key factor contributing towards low enrollments is the rigid segregation of the academic and TVET sectors.

“Students are drilled from the O-Levels itself to think that only A-Levels and academics matter”, she said, leading to a lack of social recognition of TVET.

She further stated that the shortage of qualifications of TVET teachers in comparison to teachers in academics exacerbates this mindset, particularly in a status-conscious society as ours. Insufficient funding of the TVET sector is another constraint. Although equipment and programs for training students cost significantly more than for producing a graduate, fewer funds are allocated to the TVET sector, given that academics are prioritized.

Education Planning and Implementation of Reforms

Dr. Upali Sedere, Rector of the Sri Lanka International Buddhist Academy and education sector specialist, stressed the importance of efficient planning and coordination between different stakeholders in developing effective policy frameworks. According to the current structure in Sri Lanka, the NEC is in charge of formulating education policy, while the NIE is responsible for the preparation of such policies. The MOE is tasked with implementation, monitoring and supervision. But, he pointed out that lack of a national plan and proper coordination between these stakeholders acts as constraints in the system. Politicized systems and poor capacity of current bureaucrats were also identified as issues.

Critical to addressing any policy suggestions for improvement, however, is the need to confront implementation hurdles, noted Dr. G.B. Gunewardena, Vice Chairman of the NEC. He lamented that despite a range of good practical recommendations that have emerged from numerous research studies conducted over the years, lack of a stable system of implementation has hindered progress.

“The Education Ordinance (No. 31 of 1939) still remains the basic law of education in Sri Lanka, despite several attempts to push the implementation of new policies over the past decades”, said Dr. Gunewardena.

While the NEC is mandated to submit recommendations to the president, it is up to the president to accept such recommendations and declare them as policy. Despite policy recommendations being presented to several presidents on 18 occasions, only the most recent proposals submitted in January last year have been accepted.  He further stated that there is a ‘legal vacuum’ for education in Sri Lanka, “a situation we need to overcome.”

Priority areas identified by the participants for research collaborations with IPS included measuringthe effectiveness of utilization of education funding, reassessing the current education evaluation systems andeducation outcomes being measured, analyzing the psychological problems faced by students and the adequacy of counselling and career guidance programs in schools, and studying the policy impact of research to determine what works and what does not in policy recommendations.