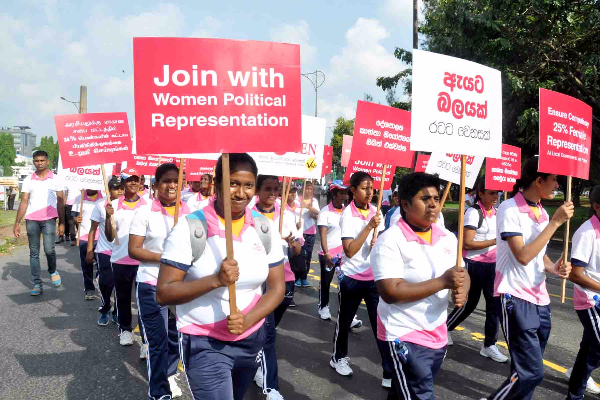 Sri Lanka is widely acclaimed for its success in achieving many crucial human development indicators. However, surprisingly the country lags behind when it comes to achieving gender related targets set by global development agendas. Despite boasting of having the world’s first female prime minister, historically, Sri Lanka’s performance has been disappointing with regard to women’s participation in decision making at the national level. In the first Ceylon State Council (1931-1936), there were only 2 women representatives accounting for just 3.4% of total representation; more than 80 years later, the eighth Parliament of Sri Lanka (2015-present) still has only 13 female representatives. However, in a landmark achievement, it has been made mandatory for all political parties to have 25% female representation in candidate lists at the upcoming Local Government Elections. But violence against female candidates and discrimination against women within political parties are tainting this historical milestone. This indicates the need for a more comprehensive approach to enhance women’s leadership in decision making bodies at all levels, especially at the community level – the most critical entry point leading to national level leadership positions.

In this backdrop, the Ministry of Women and Child Affairs, and Plan International Sri Lanka, together with the Institute of Policy Studies of Sri Lanka (IPS) recently carried out a research study to identify the main obstacles faced by women when emerging as leaders at different levels. This article, based on the study, focuses on female leadership at the community level.

At the national level, female leadership promotes policy agendas focused on inclusivity and empowerment, especially with regard to increased access to education, employment, and economic participation of women. At the business level, studies have demonstrated little gender difference in key leadership qualities, such as innovativeness, entrepreneurship, and intelligence. It is also evident that women are better than men when it comes to being compassionate and organized – companies that have female board members show significantly better financial performance than those with low female representation. There are also many benefits of having women leaders at the community level; higher status in the community, more women approaching the community leaders, and increased numbers in civic associations, such as school management committees, development committees, village development committees, and political parties, and more unity to take action on local problems, such as corruption, child marriage, and dowry to name a few.

Barriers to Female Leadership at the Community Level

Community discussions and consultations with stakeholders conducted under the above-mentioned IPS study confirmed that women’s participation is prominent in Community Based Organizations (CBOs). In fact, women’s visibility in community activities is remarkably higher than that of men.  Indeed,  it is evident that in  many contexts  leadership experience  and  social  capital gained at the CBOs play  a critical role in formulating women  political  leaders.However, even the most active female members were reluctant to take up leadership positions at these CBOs. The study revealed a number of reasons behind this hesitancy.

Lack of recognition: the community consultations revealed that most of the female CBO leaders are not satisfied with the recognition they get from society. In some cases, they are disappointed by the support and appreciation from spouses and family members.

Uneven distribution of family responsibilities: this is another factor that limits women taking leadership at the community level. In most families, the time and support given by males in carrying out day-to-day household chores are limited, and women are expected to tackle household duties and care work by themselves. As such, women are reluctant to take leadership positions in CBOs due to the difficulty in balancing family responsibilities with community work.

Negative self-attitudes: false social perceptions about women leaders (e.g., “women are not ‘strong’ enough to lead”) and traditional stereotypes discourage women from realizing their leadership potential. Community members stressed that the current education system, which is more exam-centric, is also responsible for this, as it does not provide adequate support to build leadership qualities and to overcome the negative self-attitudes among children.

Restrictions on mobility: mobility restrictions are mainly imposed by cultural beliefs and social norms (e.g., “it is not suitable for woman to go out during the night”). At the community level, leaders are expected to interact with others and act quickly in case of an emergency. But women may not have the flexibility to be available and at all times of the day, especially at night.

Lack of interest: even though community leadership paves the way for political leadershipin most communities, women deemed involvement in politics as a ‘non-productive activity’ and a ‘waste of time’. Most of them preferred to spend their time on economic activities or with their families, over participating in political meetings and election campaigns. It was evident that a fear of supporting a particular political party openly, low presence of female leaders in politics, prevalence of violence, lack of resources, and lack of support from other women constrained women’s active political participation. Community consultations revealed that women’s low enthusiasm in taking leadership positions is mostly due to external barriers, as mentioned above. Hence, to increase the visibility of women at leadership positions, a holistic approach is needed; enhancing women’s leadership qualities should start at early stages of life and at every level of society. With such backing, women will be able to perform much better as leaders, especially at the community level. Women should be encouraged to take part in decision making process by making them aware of the importance of such involvement and by providing them required assistance both in monetary and non-monetary forms.

Most of the barriers facing women are tied to social norms and practices on gender. Changing such gender norms and stereotypes is challenging and sluggish. Yet, Sri Lanka’s education system can contribute immensely in speeding up this process by providing more gender-balanced education and by opening up more avenues to develop girls’ leadership qualities from an early stage.

Women also need to recognize and value their own selves as powerful, and important.  For this, they need strong support networks and inspiration.

*This article is based on the research findings of the ‘Assessing the Sri Lankan Girls’ and Young Women’s Economic and Social Empowerment for Leadership’ done by IPS with funding from Plan International Sri Lanka.