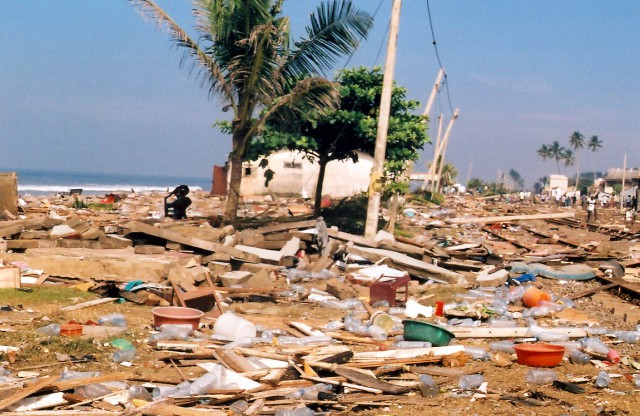 With the arrival of monsoon rains, Sri Lanka is just seeing the end of the drought that impaired many parts of the country. However, its negative effects continue to be felt by the affected communities. Unfortunately, droughts are not the only natural disaster Sri Lanka has seen in the recent past; the country has been wrecked by a series of floods and landslides alternatively, during the past few years, while Sri Lanka is at risk for such calamities in the future too. The economic costs of these climate-induced natural disasters are immense, and the government spends significant amount of funds on disaster relief activities alone. The Ministry of Disaster Management provided more than Rs. 117 million to district secretariats just for the disasters that occurred in 2016. Additionally, the Ministry of Defense has spent around Rs. 60 million for immediate search, rescue and relief operations. As such, an efficient and effective approach to build resilience to disasters is both vital and urgent.

In terms of the number of affected people, droughts, floods cyclones, tsunami, heavy rains, and landslides are the most important natural disasters recorded in Sri Lanka, as per the DesInventar database managed by the Disaster Management Centre (DMC). The number of people affected by disasters has been steadily increasing from 1960s until now (Figure 1). There are two major conceptual fields, with separate policy and institutional frameworks, governing the handling of climate-induced natural disasters in Sri Lanka. These are disaster risk reduction (DRR) and climate adaptation. The main agencies for DRR include the Ministry of Disaster Management and its supporting agencies. The Department of Meteorology is responsible for providing disaster related data and information. Meanwhile, the Ministry of Mahaweli Development and Environment, and the Climate Change Secretariat under the Ministry, serve as the focal points for climate adaptation.

There are several policy documents that deal with climate-induced natural disasters, namely the Sri Lanka Comprehensive Disaster Management Programme (SLCDMP) 2014–2018, the National Adaptation Plan (NAP) for Climate Change Impacts in Sri Lanka 2016-2025, the Nationally Determined Contributions (NDCs), and the Sri Lanka Post-Disaster Needs Assessment (PDNA) – Floods and Landslides May 2016. There have been several donor funded projects aimed at disaster mitigation measures in the country as well. As DRR is an important cross-cutting issue, it is linked to many agencies that deal with various aspects related to DRR. Thus, sectoral policies have clear linkages with DRR, though such linkages may not be explicitly stated in the policy documents. There are many policies and regulations with direct reference to DRR, such as the Mahaweli Authority Act, the Flood Ordinance, and the National Land Use Policy.

On a positive note, Sri Lanka’s policy framework for disaster risk management covers all the necessary aspects of disaster risk management. The subject has been evolving and gaining momentum following the significant disasters which affected the country. The international initiatives and mechanisms, and Sri Lanka’s commitments to them, have shaped the disaster management framework to a considerable level. However, even though sufficient thought has been put towards disaster resilience, significant gaps remain in relation to coordination and integration.

As disaster management is a cross-cutting issue, it is essential to mainstream and integrate disaster management aspects in development policies and planning. This is a highly considered area in Sri Lanka’s policymaking, and certain steps have been taken to integrate disaster management in development activities. However, it needs further improvement. If not, the absence of a common and shared framework constraints donor investments in DRR. Aspects of disaster risk management have to be streamlined to sectoral policies and regulations to be effectively implemented. Involvement of the sectoral agencies, facilitated by a proper coordination mechanism, is a must in DRR activities. For instance, the National Physical Plan lacks focus on natural disasters and other climate change related issues, although it is now being revised to incorporate these.

Sri Lanka’s disaster management system is now more geared towards DRR, shifting away from the previous approach of emphasizing relief interventions after disaster events. Government investment on risk reduction and disaster mitigation has shown an increasing trend over the years. However, there is enough evidence to prove that post-disaster activities have distributional and targeting issues.

Vulnerability maps for droughts, floods, cyclones, landslides, lightning, and coastal hazards have been finalized by the DMC, in collaboration with the relevant technical agencies. These are being used at present on pilot basis for project related activities. However, the high resolution maps, required for planning activities to evaluate disaster risks for specific sites, are still not available.

There are gaps in the existing social protection system, particularly in disaster related social protection schemes. Crop insurance/climate insurance have a key role in this regard, given that agriculture is one of the sectors highly affected by floods, droughts, and landslides as highlighted by an IPS study. However, these insurance schemes operate far below their potential.

What Needs to be Done?

Resilient development should synergize DRR and climate adaptation at the national level. A collaborative mechanism should be in place to coordinate the actions taken under DRR and climate adaptation. DRR should not be a standalone sector in the overall development framework of Sri Lanka. Currently, there are signs of mainstreaming the important aspects into sectoral policies and plans.

DRR aspects should be further strengthened using both physical measures and socio-economic instruments. Meaningful involvement of stakeholders, including the local communities, is a must in designing such interventions. Proper attention should be paid towards the implementation of necessary measures, based on the recovery needs identified by the PDNA and other policy documents. Enhancing the social protection system to address the medium and long-term recovery needs should be an important element in this regard. To this end, the implementation of an effective disaster insurance mechanism to cover vulnerable sectors has been highlighted by both international initiatives and national policy documents.

Reliable and timely data and information on disasters provide the foundation for many disaster risk management initiatives. It is highly opportune to develop a comprehensive mechanism for sharing data and information among all users. This should be coupled with effective capacity building of data generating agencies.

*This blog is based on a chapter written for the recently launched Sri-Lanka: State of the Economy 2017 report, IPS’ annual flagship publication.