Poverty and Access to Education: An Old Problem Affecting the Young Generation of Sri Lanka 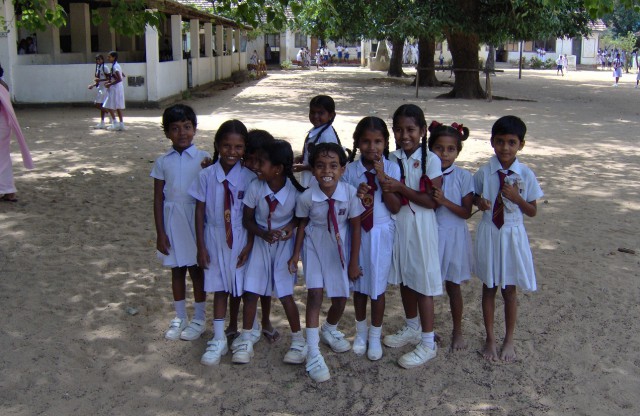 The importance of providing access to quality education to all, in order to eradicate extreme poverty and reduce poverty, is well documented. The UNICEF’s Child Poverty in Post 2015 Agenda, argues that extreme child poverty can lead to an intergenerational poverty cycle. It further highlights the need to break this intergenerational poverty cycle by eradicating child poverty for the sustainable eradication of extreme poverty. The World Education Blog (2013) of UNESCO argues that equal access to quality education is essential in eradicating poverty and that it gives the underprivileged children a better chance for a decent and fulfilling life.  The Education For All (EFA) Global Monitoring Report’s ‘Education Transforms’ booklet, shows that equal opportunities for education not only help develop the skills needed to improve livelihoods, but also generate productivity gains that boost economic growth. It notes however, that for economic growth to reduce poverty, it is necessary to overcome inequality by improving the lives of the poorest and the marginalised the most. Quality education for all is vital to achieve this goal, because it can help ensure that the benefits of economic growth are fairly distributed.

Educated men and women are more likely to hold jobs that are secure, with good working conditions and decent pay. Therefore, it is important to take a closer look at the education offered to poor children in Sri Lanka. This analysis, based on the Household Income and Expenditure Survey-2012/13, conducted by the Department of Census and Statistics (DCS), focuses on the socio-economic background of  poor children (under 19 years) dropping out of school. As it is important to look at the children living in income poor households as well as in multidimensionally poor households, the analysis concentrates on children living in Income Poor and/ or Multidimensionnally Poor Households. To identify the socioeconomic background of poor children who are not attending school, all households were classified into nine socioeconomic groups (SEGs), based on the occupation or the activity of the head of the household (Figure 2).

Of the poor children not attending school in the 5 to 14 year age group, 8,421 or 34.7 per cent are living in households headed by agriculture, forestry, and fisheries labourers. This is followed by poor children in households headed by persons unable or too old to work (13.3 per cent), skilled agricultural, forestry and fishery workers (10.8 per cent), household work (10.8 per cent) and non-agricultural labourers and similar workers (9.6 per cent). These five socio-economic groups alone accounts for almost 80 per cent of the total number of poor children not attending school.

Older children not attending school: Many children leave formal school education after 14 years of age. Although it had been recommended that the compusory age for schooling should be increased to 16 years, it is still to be implemented. Nearly one fourth (23.8 per cent) of the poor children aged 15-16 years are not attending school, indicating that they leave school education, even without attempting G.C.E. (O/L) Examination (Figure 1). The percentage increases to as high as 64.7 for poor children in the ages  17-18 years, showing that almost two thirds of poor children are leaving school education after Grade 11, either completing or halfway through G.C.E. (O/L) Examination. Except poor children from households headed by administrators, senior officials (including those in the armed forces) and professionals, and those who are engaged in clerical jobs, services, sales and similar work, in all other socio-economic groups, around 20 per cent of the poor 15-16 year olds are not attending school. Out of the poor 17-18 year olds in the households headed by those who are unable or too old to work, more than 75 per cent are not attending school (Figure 2). After 14 years of age, a significant number of poor children leave formal school education. In-depth analysis is needed to find why a significantly large proportion of poor children leave school education after 14 years of age. According to an article by Nisha Arunatilake in the International Journal of Educational Research, a reason could be that the distance to schools being too far, making travelling too costly. As Arunatilake points out, some poor children, especially males may be forced to provide labour or assist the breadwinners. Due to high dependency burden, some of the children from large families could also be kept away from school. Disability could be another reason for poor children dropping out of school early.

As stated in Education Transforms Lives (UNESCO) , it is important to ensure that all children, regardless of their family income, where they live, their gender, their ethnicity or whether they are disabled, are provided with equitable quality education, which will increase their chances for employment and thereby help move out of poverty.

Implementing the policy decision to increase the compulsory age to 16 years, as stated in Education First Sri Lanka, Ministry of Education (2013), may also help poor children who are capable and wish to continue their studies to stay in school.

*This blog is based on a Policy Brief written for the forthcoming Sri-Lanka: State of the Economy 2017 report, IPS’ annual flagship publication.