Achieving Food Security: A Plausible Reality or a Pipedream for Sri Lanka? 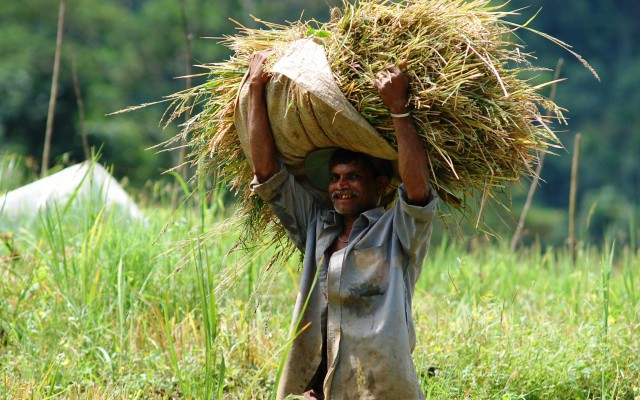 Almost 900,000 people in North Central and Eastern parts of Sri Lanka faced serious food insecurity issues in 2016 due to the country’s worst drought in 40 years. This situation was further exacerbated by severe floods in May 2017 in South Western parts of the country. The United Nations Food and Agriculture Organization (UNFAO) estimates that about 4.7 million people of the 21 million population of Sri Lanka, or over one-fourth of the population, do not have sufficient food to sustain a healthy life. The country’s population is projected to rise by more than 600,000 by 2030 and the demand for food is expected to jump sharply. With the continuously increasing pressure on food supply, the need for addressing the challenges of food security is of greater urgency than before.

However, despite a multitude of different policies and programmes, implemented by various institutions to help Sri Lanka achieve food security, the situation has not improved over the years, and the country does not yet have a clear and comprehensive strategy to reach this target. It is in this backdrop that this article aims to bring attention to the possible ways of addressing major issues of prolonged food insecurity in Sri Lanka.

The United Nations Food and Agriculture Organization estimates that about 795 million people of the 7.3 billion people in the world, or one in nine, were suffering from chronic undernourishment in 2014-2016. Almost all the hungry people, 780 million, live in developing countries, representing 12.9 percent, or one in eight, of the population of developing counties.Food insecurity, which is associated with adverse dietary and health outcomes in both adults and children, occurs when people are deprived of sufficient and nutritious food consistently. Hunger and malnutrition are the major outcomes of food insecurity and are measured using several indicators. The Global Hunger Index (GHI) and the Global Food Security Index (GFSI) both rank Sri Lanka poorly in terms of food security (Figure 1). Based on the FAO statistics, the level of calorie deficit in Sri Lanka, 192 Kcal/capita/day on average in 2014-2016, is the highest in South Asia. With regard to the prevalence of undernourishment, Afghanistan (26.8 per cent) is the only country that is worse off than Sri Lanka (22 per cent) in South Asia. Moreover, Sri Lanka (29 per cent) is only trumped by Afghanistan (36.6 per cent) and Pakistan (30.5 per cent) in South Asia, with regard to the prevalence of food inadequacy. National Nutrient and Micro Nutrient Survey in 2012 has identified that the lack of food security in Sri Lanka has led to a high prevalence of developmental and growth issues – measured in terms of stunting (low height for weight), wasting (low weight for height) and weight, the key indicators of a countries’ nutritional status. Sri Lanka suffers from high levels of stunting (13.1 per cent), wasting (19.6 per cent) and underweight (23.5 per cent), among children less than 5 years of age. It faces the third highest prevalence of wasting in the world, only behind Djibouti and South Sudan; the incidence of wasting in Sri Lanka has increased from 11.7 in 2009 to 19.6 in 2012. Moreover, severe regional disparities prevail in malnutrition, as in the case of poverty and economic growth. Estate sector population in the up-country districts and those in the formerly war-affected Eastern Province, are ravaged with the worst levels of malnutrition in the country. These figures suggest that Sri Lanka still has a long way to go to overcome current challenges, by ensuring availability, accessibility, utilization, and stability of nutritious food.

What Makes Us Food Insecure?

Food security is largely dependent on the agricultural sector. Therefore, the focus must be on developing national agriculture, to increase the quantity and diversity of nutritious food, as well as to act as a driver of economic transformation for the rural poor, the most food insecure population in Sri Lanka.

There are several food-production related factors which keep Sri Lanka food insecure. The yield levels of domestically grown food crops have stagnated during recent years, indicating a potential mismatch between the domestic production and  national demand, which is on the rise due to  population growth and  growth of real per capita income. Additionally,  lack of crop diversification has created a significant gap between what is available for consumption and what is needed to ensure proper nutrition, as illustrated in Figure 2. Moreover, about 30-40 per cent of crops are wasted along the value chain, never making its way to hungry people. Sri Lanka also faces issues with rising food prices. Erratic weather, caused in part by climate change, and haphazard changes of import duties and non-tariff barriers have been the sources of rising cost of food. Higher food prices may limit poor households’ access to food, and cause them to shift to less nutritious diets, resulting in negative health consequences.WFP explains that over 50 per cent of the households in the Eastern Province, and 39-48 per cent in the Uva Province could not afford an adequately nutritious diet in 2014. Sri Lanka does not have a comprehensive agriculture policy to address the above issues; this has resulted in the adoption of popular, non-evidence based, and erratic policy decisions.

The development of sustainable agriculture is the central element of ensuring food security, as Sri Lanka’s food production sector is the backbone of the country’s food security. However, it is mandatory that nutrition and health interventions are also undertaken concurrently to ensure food is being utilized in healthy and nutritious ways. Therefore, development of a comprehensive national agriculture policy, in close consultation with national nutrition policies, should be the priority to ensure food security. Policy strategies of relevant institutions that relate to output, land, and other resource utilization need to be identified and harmonized within the overall policy framework. The problem of poor coordination and inter-agency friction has to be eliminated by bringing down the number of agencies or/and placing all policies and programmes related to food security under a single institutional umbrella, at the highest levels of political authority in the country.

On the food production front, the current incoherent land use policies need to be reformed and appropriate technologies (e.g., drip irrigation, green house) need to be adopted widely. Together, these policies will foster an increase in agricultural productivity, while simultaneously promoting sustainability and nutrition sensitivity – both important for food security. Private sector investments should be promoted in agribusiness and public-private-producer partnerships (4Ps) should be established to integrate the small-holders with global value chains. Additionally, public investment allocations should be transitioned from subsidies and price/marketing interventions towards strengthening economically profitable and socially justifiable interventions, particularly agricultural infrastructure development (e.g., irrigation, storage, and rural roads), extension and agricultural research and development.

The regulatory framework on food preparation protocols needs to be reviewed and revised to minimize the loss of macro and micronutrients in food preparation, and to maximize appropriate micronutrient fortification, especially in state-sponsored food programmes, to ensure proper food utilization. Actions to encourage production and consumption of traditional indigenous food should also be emphasized. Nutrition education should be streamlined to support proper utilization of food.

The government needs to address long term threats to food security, such as climate change, by enhancing the country’s climate change adaptive capacity as presented by the National Adaptation Plan and by adopting different resilience strategies, such as buffer stocks and index-based agricultural insurance. However, long term solutions must be coupled with short-run social safety nets to address the welfare of vulnerable groups. If these measures are undertaken with a coordinated approach, achieving food security would not be a distant reality.

*Authors, Manoj Thibbotuwawa is a Research Fellow and Erin Leonard is a Project Officer at the IPS. This blog is based on a chapter written for the forthcoming Sri-Lanka: State of the Economy 2017 report, IPS’ annual flagship publication.