A Mess as Old as Time: The Economic Cost of Natural Disasters in Sri Lanka 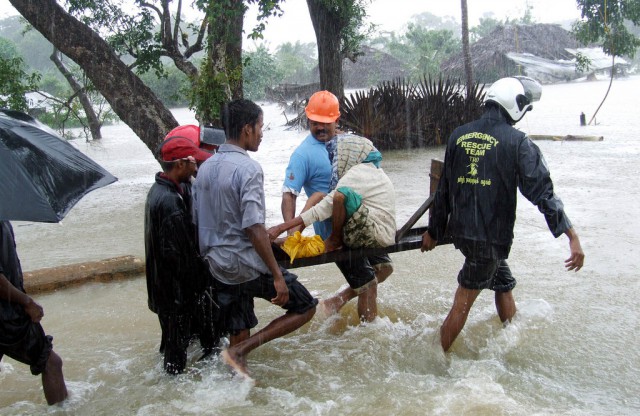 The recent floods in Sri Lanka, triggered by the monsoon rains, affected over 700,000 people in 15 districts, killed over 200, fully destroyed over 2,000 houses and partially damaged around 12,529 houses. In addition to the recurring downpours, Sri Lanka has also experienced similar environmental crises due to droughts and landslides in recent years. Meanwhile, the Tsunami in 2004 that affected over a million people in Sri Lanka highlighted the country’s vulnerability to low frequency, but high impact events.

Despite the fact that all countries suffer from disasters, they have the greatest impact on developing and less developed nations, such as Sri Lanka. The economic costs of natural disasters have a macroeconomic impact, due to increased health expenditure, loss of labour and productivity, and reduced investments in human and physical capital formation. Additionally, the microeconomic impact affects individual households, firms and governments. Evidently, natural disasters between the years 1900-2015, based on over 30,000 events globally, resulted in an economic loss of US$7 trillion.

The Penalty for such Cataclysm in Sri Lanka

The Disaster Management Centre (DMC) was established in Sri Lanka, for the purpose of assuring national-level safety, through a systematic management of natural, technological, and man-made disasters. Yet, the DMC has consistently failed to inform vulnerable communities about the potential dangers posed by such disasters beforehand. Lack of prior planning and communication has been the main reason for the failure to avoid devastating effects of natural disasters in Sri Lanka.

Although the Disaster Management Act of 2005 allows the National Council for Disaster Management to formulate national policy to effectively use resources to prepare, prevent, respond, and provide relief through construction and rehabilitation, Sri Lanka lacks the technological capabilities to identify threats early on. While the cost of expenditure borne by the local government due to the recent floods is yet to be determined, the Ministry of Disaster Management estimates the total cost of damages and losses during last year’s floods to be RS. 690 million. Between the years 2007-2011, government expenditure on food aid and relief supporting expenses due to natural disasters exceeded RS. 1.7 billion. Such government expenses on reconstruction and relief efforts impose unexpected fiscal shocks to the economy. Natural disasters such as floods, landslides and droughts cause contractions in economic activity, especially in the agriculture sector, which heavily relies on terrain and weather patterns. Disasters will further derail development when buildings and infrastructure are totally destroyed or partially damaged. This will put unsustainable fiscal pressures on governments, with increased expenditure for reconstruction and rehabilitation activities. The indirect loses incurred will include a reduction in labour involved in domestic production, forcing households to divert their spending from leisure consumption to reconstruction and rehabilitation activities and other social protection needs stemming from such calamities. For this reason, it is pivotal for Sri Lanka to have efficient systems and processes installed to reduce the detrimental impact of disasters. Standpoint of a Developed Nation

Japan is yet another example of a nation with a strategic disaster management system. Japan is affected by typhoons almost every year and volcanic disasters triggered by earthquakes. To lessen the negative impact of such disasters, the Basic Disaster Management Plan is implemented in the country. The plan, made in accordance with the Disaster Countermeasure Basic Act (Article 34), covers the sequential measures taken during a disaster, ranging from preparation, emergency response, recovery and reconstruction, according to the type of disaster. It should be noted that the proactive measures taken by the state for disaster risk reduction have taken key issues in to account; such as the states’ infrastructure, policy planning, information sharing, and capacity building requirements. Such vigilant preparation and effective implementations of policy are aspects Sri Lanka should reflect upon in developing disaster risk reduction strategies. Since the Great East Japan Earthquake and Tsunami in 2011, Japan has invested heavily on technologically advanced early-warning systems. Emergency drills have been organized by public organizations. The nation’s Tsunami warning system has the technological capability of monitoring seismic activity 24/7. Tsunami prone areas have more than 10,000 evacuation facilities, while some of the cities have tsunami walls and floodgates to prevent waves from traveling inward through river systems, amongst many other processes.

Standpoint of a Developing Nation

An example of a developing nation that has taken meticulous steps to mitigate the risk of natural disasters, cyclones in particular, is Bangladesh. It is evident that Bangladesh has taken substantial steps to reduce the risk of disasters, relative to the practical measures taken by Sri Lanka. The Government of Bangladesh has identified the importance of using a combination of structural and non-structural mitigation methods to reduce the negative impact of disasters through the Comprehensive Disaster Management Programme (CDMP) initiated in 1993. As structural methods, the government has constructed over 1,800 cyclone shelters and 200 flood shelters to evacuate people exposed to peril. Additionally, about 8,200 km long flood protection embankments, 3,400 km long drainage channels, and 9,000 sluice gates and regulators on different rivers and canals have been constructed, to avoid the impact of tidal waves, storm surges and flooding. The government has further formulated mechanisms for various councils and committees to maintain coordination amongst the concerned ministries, departments, line agents, local government bodies and community members. Non-structural methods of mitigation by the government emphasize on the legislation, policies, training, and making the public aware of the hazardous impacts and safety measures. With proactive measures, authorities in Bangladesh were able to move almost 300,000 people to safety and reduce the impact when cyclone Mora hit Bangladesh’s southeastern coast this year, which is in stark contrast to Sri Lanka.

The proliferation of public debt and other economic concerns hinder the implementation of the proposed strategies. It is yet crucial to understand the importance of implementing an effective disaster management policy in reducing the risk of imminent disasters.

While the Sri Lanka Comprehensive Disaster Management Programme (SLCDMP) aims at reducing the potential disaster risks and impact on people, property and the economy; one of the crucial challenges that has received little attention is incorporating all segments of society including women, children, differently abled, and the poor when designing the comprehensive national policy. Political leadership should play a focal role in establishing inclusive comprehensive policies for disaster risk management. Leaders in a democratically elected government, who have a period of a mere 5-6 years to execute policy measures, generally focus on issues in the economy that need immediate solutions. Hence, investing on disaster risk management systems might be of less interest to politicians. Although a Japan Disaster Relief (JDR) expert team is assigned to prepare a comprehensive national action plan for efficient management of disasters for Sri Lanka, the implementation and order of operations is yet to be observed. Further, it should be noted that natural disasters are not constrained to national boundaries. Hence, it is essential to address key issues and solutions through better regional integration for mutual benefit.

Additionally, there will an opportunity cost in investing on systems such as the Japanese Doppler Meteorological Radar System, as high costs have to be borne by the government. For a developing nation like Sri Lanka, there would be an alternative development activity that could be undertaken with the limited resources the government holds. However, it is important that the authorities carefully analyze the benefit-cost outcomes from a long-term perspective.

While not all natural disasters can be prevented, the damage caused by such catastrophes could be mitigated using systematic procedures that comprise of evacuation planning, environmental planning, training of personnel and post-disaster actions plans. There is a widespread need for effective disaster risk reduction mechanisms to be developed as well as implemented. Sri Lanka would be better placed with the presence of a stronger institutional framework on disaster risk management, where the government will be able to better utilize the resources by effective allocation of resource to more concerning issues in the long-term.

Semini was a Project Intern at IPS.