A Temporary Salve: Implications of an Oil Bear Market on the Sri Lankan Economy 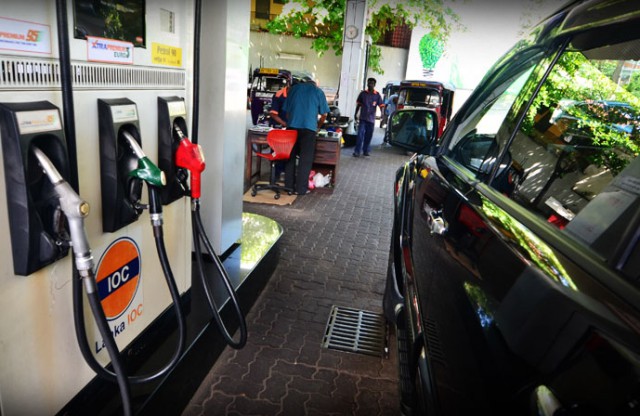 Sri Lanka’s fuel bill has been spiraling as of late. According to a recent Central Bank press releaseon external sector performance, petroleum purchases for the first four months of 2017 were estimated at US$ 1.2 billion. This represents a colossal 75% increase in the value of such imports, when compared to tabulated estimates for the corresponding period last year.

This development is of great concern. Given Sri Lanka’s dependency on imported fuel for domestic consumption, swings in global non-renewable energy markets will have direct implications on the nation’s ability to reduce its trade deficit and sustain growth prospects.

This article examines recent trends in global oil markets and analyzes corresponding impacts on the domestic economy. It suggests that while global oil prices are expected to decline in the short to medium term, Sri Lanka cannot be expected to maximize growth potential and ensure energy independency due to several structural inefficiencies. Rather, bearish oil market outlooks provide a thin window of opportunity to implement timely socio-economic reforms, sans excessive concerns of exogenous shocks.

International markets witnessed a precipitous drop in oil prices during the last four years. Crude prices – as per the Organization of Petroleum Exporting Countries (OPEC) reference basket – plunged from an average of US$ 112/barrel in June 2014 to US$ 26.50/barrel by February 2016. While a brief resurgence in the market led to prices reaching US$ 54/barrel by April 2017, recent announcements of production gains in several producer nations has exacerbated market volatility. As of mid-July 2017, the average price of the OPEC crudes had decreased to US$ 45/barrel.

Looking ahead, oil price forecasts are contingent upon the production decisions of major suppliers. It is common knowledge that oversupply has been the principal cause for sluggish market conditions. However, while calls for production cuts have continued to resonate amongst producer circles, they have not been backed by adequate implementation mechanisms. Rather, major oil producers such as the United States, Iran, Libya and Nigeria are expected to increase their supply capacity in the coming months.

Considering the above, market experts view future prospects with reserved pessimism. Projections appear to indicate that crude prices are expected to hover at a reduced US$ 45-55 range for the rest of 2017.

The import price of crude oil had risen from US$44 per barrel in April 2016 to US$ 56.5 per barrel by April 2017, proving to be a principal cause for escalating fuel purchase values. Therein, projections as indicated above suggest that Sri Lanka can be expected to register a lower fuel import bill over the coming months. While this translates as good news, the actual scale of benefits is contingent upon contemporary economic conditions. Potential outcomes can perhaps be gauged by reviewing the effects of the previous oil slump experienced between the years 2014 and 2016.

In 2013, Central Bank reports indicate that Sri Lanka’s annual petroleum import was valued at US$ 4.2 billion, and encompassed 23% of the aggregate import bill. By 2016, the value of petroleum imports had decreased by 45% to US$ 2.3 billion, and comprised 11% of aggregate imports. In addition, prices of petrol and diesel in retail markets (calculated using Central Bank annual reports) were decreased by approximately 25%, while the price of kerosene was slashed by 40% during the given period.

Despite declines in fuel import values, Sri Lanka’s trade deficit continued to linger at the 11% of GDP threshold between 2014 and 2016. Gross Official Reserves dipped from US$ 8.2 billion in December 2014 to US$ 6 billion in December 2016, regardless of significant reductions in the fuel bill. Moreover, Sri Lanka’s GDP growth averaged 4.7% per annum, considerably lower than the South Asian average of 7.1% per annum for the three-year period.

A cursory glance of such comparisons might tempt readers to surmise that favorable oil market outlooks have not translated to tangible benefits to Sri Lanka’s economy. However, this is not true – Sri Lanka’s somber performance can be attributed to a complex interplay of several determinants. In such a scenario, one can argue that dampened fuel prices did indeed play a beneficial role in alleviating economic pressures.

In this context, it can be surmised that lower oil prices, during the period 2014 to 2016, played a crucial role in buttressing a fragile Sri Lankan economy. It helped the island nation tolerate structural inefficiencies that would have otherwise hastened an economic downturn.

Given that such inefficiencies will continue to linger in the short to medium term, predictions of a bearish oil market will be met with signs of relief. Sri Lanka has now been offered a vital, albeit undeserved, breathing space to usher in urgent economic reforms.

In addition, Sri Lanka’s dependency on external petroleum sources necessitates the establishment of a streamlined and cost-effective energy procurement platform for stable growth. An examination of recent import history reveals concerning trends in this regard. Between 2013 and 2016, quantities of refined petroleum imports increased by 33%, while the quantity of crude oil imports decreased by 3%. Concurrently, domestic petroleum consumption increased by 25% within the given period. Therein, swelling rates of domestic petroleum consumption has been largely satiated by an increased inflow of refined petroleum derivatives.

This development will be met with concern given its adverse impact on cost efficiency. Refined petroleum products are priced higher than crude oil, due to high margins placed on refinery operations. Sri Lanka could have made tremendous savings by importing crude and utilizing domestic industry to process derivatives. Unfortunately, this strategy is unviable due to capacity and process constraints in the country’s sole refinery in Sapugaskanda.

Furthermore, increased reliance on refined petroleum imports exposes Sri Lanka to additional layers of extraneous risk. Petroleum inflows will now be contingent upon producer and processer stability, regardless of contractual developments. In Sri Lanka’s case, UN trade statistics indicate that approximately 36% (US$ 600 million) of Sri Lanka’s refined petroleum imports for 2016 were purchased from Singaporean refineries. However, Singapore does not possess a significant indigenous source of crude oil. Rather, its refineries depend on crude imports from the Middle East and Malaysia. Through such a trade, Sri Lanka is sensitized to intra-industrial and geographical shocks over which the county has minimal control.

While the current drive to maximize Sri Lanka’s trade potential is encouraging, the long-drawn nature of contemporary decision-making is of concern. A sense of urgency is essential, given that Sri Lanka remains exposed to external sector shocks precariously linked to fluctuations in energy costs. Fortunately, slumping oil market sentiments – anticipated in the short to medium term – mean that the country has been provided a narrow window of opportunity to initiate reforms measures that foster energy and economic sustainability. It is imperative that actions are hastened to capitalize on this breathing space. If such chances remain untaken, Sri Lanka will soon be forced to face economic concerns on multiple fronts.

Vishvanathan Subramanian was a Research Assistant at IPS with research interests in macro-economic policies, regional integration, econometrics and economic modelling. He holds a BSc (Phi Beta Kappa) in Mathematics and Economics from Birmingham-Southern College, USA.