Oceans and Sri Lanka’s Future: Towards a Blue Economy 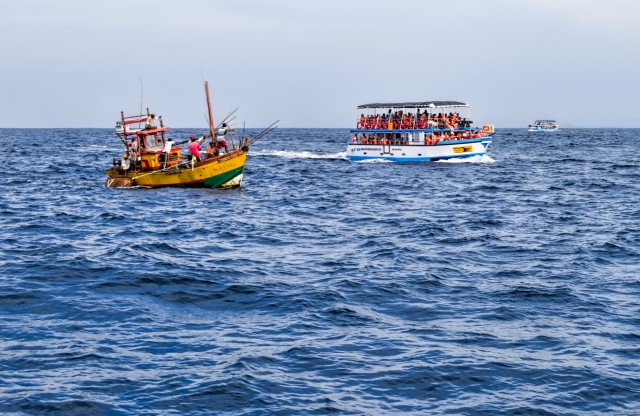 All nations around the globe are celebrating World Oceans Day today – 08 June 2017 – under the theme of ‘Our Oceans, Our Future’. While the action focus of this year’s Ocean Day is the prevention of plastic ocean pollution through events organized in several countries, it is more opportune  in the Sri Lankan context to take a broad look at the overall theme in the light of growing interest on ‘Blue Economy’ as a prospective agenda for exploring our future opportunities in oceans.

Oceans cover two thirds of the earth’s surface and over three billion people are estimated to depend on marine and coastal systems for their livelihoods, directly and indirectly. Important maritime activities, such as fishing, sea transportation, tourism, offshore mining, and energy generation, play a significant role in the national economies of many countries, including Sri Lanka. Expansion of marine economic activities can be considered as one frontier of globalization. Unfortunately, the growing human activities in the oceans, while helping to increase the prosperity all over the world, are also responsible for the degradation of marine ecosystems.

Marine ecosystems fulfil environmental functions that are essential for the survival of humans and other living beings. The oceans absorb a major share of carbon dioxide emissions that humans produce, play an important role in the stability of global climate systems, and accommodate and protect a major part of global biodiversity, making the world habitable for all of us. These global ecosystem services of the oceans have come under threat as a result of human activities such as, over exploitation of resources, illegal-unreported-unregulated (IUU) fishing activities, marine and coastal pollution, habitat destruction, and anthropogenic climate change. Impacts of such actions have become increasingly visible. It has been estimated that over 30 per cent of global fish stocks are being overfished, beyond their sustainable limits. The ocean acidity has increased by about 25 per cent compared to the pre-industrial era. Marine pollution has reached alarming levels, making oceans the largest waste dumping site globally. In this backdrop, the emerging concept of blue economy provides a way for balancing competing demands, and lays the foundation for the sustainable future of the oceans.

The origin of the concept of Blue Economy is often traced to the book titled The Blue Economy: 10 years – 100 innovations – 100 million jobs, written by Gunter Pauli, first published in 2010. However, Pauli’s concept refers to a business model, aimed at transforming society from scarcity to abundance, with the help of locally available resources, through adopting innovative measures to address environmental and related problems. It does not essentially imply ocean based economic prospects. Despite Pauli being credited with coining the term, the concept of blue economy is now being widely used to refer to human activities based on oceans, taking them as one entity. Unfortunately, it carries many meanings and interpretations, creating doubts in the minds of interested public on the subject. It appears that some parties are trying to emphasize the ecological perspectives, while others are considering it merely as an umbrella term for all economic activities in the maritime sector, carried out using ocean resources, without any reference to sustainability aspects.

To avoid such misconceptions, some international agencies have come forward with interpretations that are aimed at introducing a balanced view on the concept, emphasizing its economic, social and environmental dimensions. The World Wildlife Fund (WWF) has defined ‘sustainable’ blue economy as a marine-based economy that provides social and economic benefits for current and future generations while restoring, protecting and maintaining the diversity, productivity, resilience, core functions, and intrinsic value of marine ecosystems being based on clean technologies, renewable energy, and circular material flows keeping within the limits of one planet. The United Nations Environmental Programme (UNEP) promoted the idea that blue economy is a marine and coastal analogue to the Green Economy (GE); in essence, it implies that blue economy is applying the concepts of green economy to the unique and irreplaceable role of marine and coastal ecosystems. These definitions help to dispel misunderstandings, emphasizing the sustainability dimension, without that no value addition of advancing the concept. In the final count, a blue economy should essentially be a green economy. The legitimacy of the concept was further enhanced due to the adoption of sustainable development goals (SDGs) by world leaders in the UN General Assembly in 2015. The Goal Number 14 of the SDGs, ‘Life below Water’, is aimed at enhancing conservation and sustainable use of ocean-based resources, through wise management of resources and protection of marine and coastal ecosystems from pollution, including the impacts of ocean acidification.

Being an island nation located in a central position of Indian Ocean, adopting a blue economy strategy is not optional but mandatory for Sri Lanka. Sri Lanka has advantages, but also faces challenges due to its position. The major advantages for a blue economy include, a unique geographical position, high accessibility to ocean resources from lengthy coastline around the country, closeness to major sea lanes, sovereignty over significant area of sea compared with the country’s land resources, diverse range of coastal and marine ecosystems, and high potential for tourism and recreation industries. However, these opportunities also have challenges attached to them. The oceans around the country are highly contested by global powers, and being a small player in global political arena, Sri Lanka has to take cautious path.

The government of Sri Lanka has promoted a blue economy initiative under the ‘Sri Lanka NEXT’ programme in October 2016.  This can be considered as a timely effort. In addition, the country aspires to become a maritime hub in the region, taking the advantage of central geographical position and the closeness to major sea lanes. There were some steps taken in this direction, with mixed results. The country has been promoting its image as a tourism destination, with unique marine and coastal attraction, with some success.  Despite these ad hoc efforts, however, Sri Lanka is yet to come with a viable blue economy strategy that combines the strength of these efforts.