The Dwindling Stitching Hands: Labour Shortages in the Apparel Industry in Sri Lanka 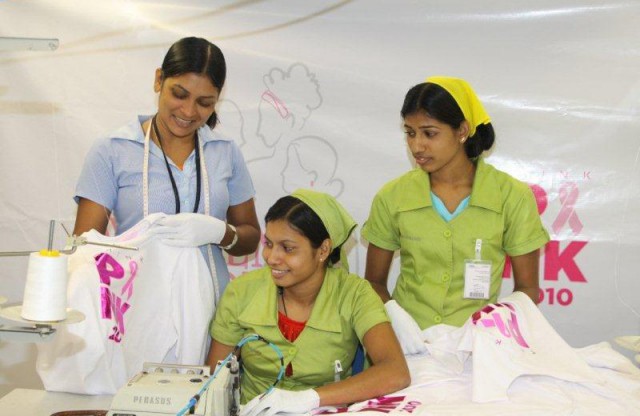 As a relatively new industry in Sri Lanka, the apparel industry has played an important role in the economy as a major income source and an avenue for creating employment opportunities, especially for women, over the last few decades. It has also created a global brand name for the country, positioning Sri Lanka’s name at a prestigious level for high quality garment products. The Sri Lankan apparel industry which operates in a highly competitive global market, mostly occupies female workers. However, it is observed that the industry has been experiencing a labour shortage over the years, especially in recruiting women for the position of machine operators. In this backdrop, a recent study on ‘An Empirical Investigation of Labour Shortage in the Manufacturing Sector in Sri Lanka’* examines the possible reasons and recommends viable solutions for the issue of labour shortage in the apparel sector.

The Sri Lankan apparel industry boasts of a long history. However, it boomed to become the largest industry in Sri Lanka after the late 1970s, owing to three major contributory factors. These were, market-oriented liberal economic policies introduced in 1977, supportive measures taken by the then government through the Board of Investment (BOI), and the quota hopping under the Multi-Fibre Arrangement (MFA). Export-led industries were given greater emphasis and promoted under market–oriented, liberal economic policies, by providing various types of concessions. Availability of educated labour at a relatively cheaper cost made Sri Lanka an attractive investment location for investors, especially as the apparel industry is labour intensive.

Since its peak, the apparel sector has been a key contributor of the Sri Lankan economy, especially in terms of the export earnings and employment generation. According to the Central Bank of Sri Lanka, in 2015, total exports of the country accounted to US$ 10,505 million out of which 46 per cent was earned from the apparels. Total export earnings from the apparel sector indicate a growing trend and accounted for US$ 4,674 million in 2016. Apparel industry provides direct employment opportunities to over 300,000 and to 600,000 indirectly.

Women in the Apparel Industry

From its conception, the apparel industry workforce has been dominated by women; in fact, women have always managed to secure more than 80 per cent of the employment share in the industry. This share is significantly higher than the women’s share in the national labour force, which was only 35 per cent in 2015. Even though the majority of the apparel sector workforce comprises of women, they are mostly confined to the lower levels of the production process, (e.g., machine operating), and men tend to dominate the upper management positions.

Despite the high level of female participation in the apparel sector, labour shortage remains a key challenge in the industry. The issue of labour shortage has become so severe that there have been proposals to automate the manufacturing process of the apparel sector in order to overcome this issue. Labour shortage is more prominent in the ‘machine operator’ positions, which are mostly occupied by women. With a low labour force participation rate and a high unemployment rate of women at the national level, (in 2015, the female labour force participation rate was 35 per cent and female unemployment rate was 7.6 per cent whereas these values for males were recorded as 75 per cent and 3 per cent respectively), it is quite alarming to see that the apparel sector is experiencing a difficulty in filling vacancies even in the occupation category, where women dominate (i.e., machine operators).

There are several reasons behind the difficulty in attracting women to fill the vacancies of the lower level job categories. Based on interviews with Human Resource Managers of some leading as well as medium and small scale firms, the following points were identified as the key reasons for the labour shortage in the apparel industry; competition, mobility, bad social image, and changing career aspirations.

Competition from other sectors – Apparel sector has to compete with other sectors, especially service sector industries such as tourism and retail, to attract labour. Wages offered by these sectors are competitive and in some cases slightly higher than the wages offered by the apparel sector. That being said, wages are not the only factor that attracts labour, especially women, to these sectors. The working environment also plays an important role in this regard. A pleasant working environment that provides facilities and comfort attracts labour more easily.

Mobility Issues – Proximity and the ease of accessing the workplace are important factors for women when choosing a job. This is particularly important for married women and women with children. Due to their familial responsibilities, they are reluctant to migrate and to work in urban areas or in the free trade zones, where many garment factories are located. Even single women are hesitant to live in urban areas because of the difficulty in finding safe accommodation.

Bad social image – There is a negative social perception associated with women who in garment factories. Female factory workers in the apparel sector are stigmatized as promiscuous and are referred to as ‘Juki girls’, a derogatory term for machine operators. Thus, due to the low social recognition and the bad reputation of female garment factory workers, young women are reluctant to join the industry. This stems from safety concerns for females and exposure to sexual harassment and abuse resulting from poor infrastructure facilities (inadequate transport and housing near factories). Women also prefer alternative sectors because of the social recognition and job esteem attached to the employment opportunities in industries such as tourism and retail.

Changing career aspirations of the younger generation – Unlike the young girls who joined garment factories as machine operators in the early stages of the apparel industry, today, most young women have obtained basic educational qualifications such as G.C. E. Ordinary Level Certificate. Along with higher level of education, their career aspirations have also changed. They tend to perceive garment factory work as a low skilled job and these ‘target oriented hardworking machine operator jobs’ are not no longer able to attract young women into the industry. Instead, they seek for more prestigious ‘computer based jobs’ where they can enjoy more flexibility and social interaction.

Factors that create and intensify labour shortage in the apparel industry should be tackled immediately, considering the high competition facing the Sri Lankan apparel industry in the global market. Offering competitive salaries and creating attractive working environments, providing more gender sensitive working options, enhancing the social recognition, and professionalization of jobs are some measures that can be taken to address the issue.

Offering competitive salaries and creating better and pleasant working environments– In order to compete with the other rival sectors in attracting labour apparel sector has to offer higher salaries. Other than this, creating pleasant working environments is another key strategy to attract more women to the apparel sector. This should entail providing not only the basic facilities such as drinking water, separate toilet facilities but also other amenities such as dining rooms, clean and tidy surroundings, proper workspaces, and suitable temperature and lighting. Other engagement activities (celebrations for special days, community work, and entertainment activities) are also important.

Creating more social recognition -social acceptance and recognition is an important element in tackling the issue of labour shortage at lower levels of the apparel sector. There have been several effective campaigns by some leading firms in the industry and by industry associations (e.g., ‘Women Go Beyond’, ‘Abhimani’). However, the social stigma attached to the women working at the garment sector prevails and holds back women from taking up jobs in this sector. More awareness should be created about the contribution made by the women occupied in the lower levels of the apparel sector for the country’s economy and they should be appreciated more.

Professionalization of jobs and creating clear career paths –by offering standard professional qualifications and certificates for occupations categories such as machine operator would increase the willingness of women to take up those jobs. It is also important to make clear career paths for them by identifying their skills and giving promotions. This would help to attract women with higher education qualifications to the industry.

There are large as well as medium and small sized firms operating in the industry. All the firms in the industry may not be able to take these measures and offer these benefits in order to attract eligible women due to financial constraints. But given the high competition for labour with other booming sectors and concerning the future of the industry, all the firms in the apparel sector have to address the issue very effectively. Individual as well as industry level approaches are also needed.

Sustainability of the apparel sector is vital for the country’s economy. It plays a key role in employment creation, especially for women, thus empowering women who occupy this sector. Employment in the apparel sector has created an environment where women can enjoy economic independence and enhance their well-being to a greater extent. Hence it is very important to protect the industry while giving dignity and recognition to the stitching hands which back the country’s economy.

*‘An Empirical Investigation of Labour Shortage in the Manufacturing Sector in Sri Lanka’ by Prof. Athula Ranasinghe (University of Colombo, Sri Lanka), Sunimalee Madurawala (Institute of Policy Studies of Sri Lanka), Dr. Jen Je Su, and Thushara Senadeera (Griffith University, Australia) funded by the Australia Awards Fellowship Programme 2016.  This article is based on the Key Informant Interviews conducted for this study.