Crop Insurance: Is it Workable in Sri Lanka? 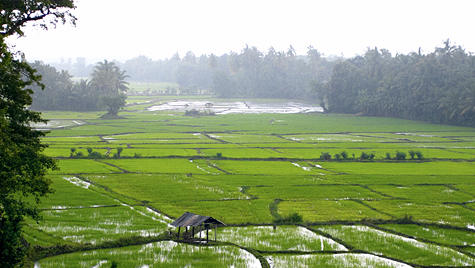 Farmers have been severely affected by various natural calamities – floods, droughts and excessive rainfalls during the recent years. At macro level, the decrease in paddy production due to unfavourable weather conditions including droughts was 27% in 2014, when compared to production statistics of the previous year. Whilst important, weather-related risks are merely one component when it comes to overall risks and uncertainties faced by farmers – which include price risks, market risks, etc.  Recent unexpected changes in climate patterns have worsened the situation.

When affected by a natural calamity, farmers face numerous additional issues in farming as well as in their household economy.  A farmer from Nachchaduwa who was severely affected by floods in 2014 said: “Everything was washed away,   Not only rice, our maize cultivations were also destroyed”.  Floods and droughts are widespread disasters, which have area-wide implications.   “We did not have any other income.  We, farmers tend to work as agricultural labourers in others fields when we face difficulties.  But when everyone’s cultivations are destroyed, where can we go?” he added, highlighting their struggle in coping with such events.

To this end, promoting effective risk management among farmers is important. In facing the impacts of a natural disaster, there are several ways of ‘risk management’, namely: avoiding risks, reducing risks and sharing risks.  Risk sharing has been gaining a lot of consideration – which comes in the form of insurance.

Crop insurance was introduced to Sri Lanka several decades ago.  It was first introduced as a pilot project; later, the Crop Insurance Act (No 13 of 1961) was passed in 1961 to provide the required legal framework for the operation of regular crop insurance.  The Agricultural Insurance Law No. 27 of 1973 came into operation in 1974 to make provisions for a more comprehensive scheme.  The Agriculture and Agrarian Insurance Board (AAIB) was established in 1999, which is the responsible government agency for undertaking the government crop insurance programme now.   A private insurance company entered the crop insurance business in 1993, and it is primarily being conducted as a welfare programme along with its other financial services.  Both insurance programmes are voluntary and indemnity-based where insurance payout is based on the crop damage.

According to the Central Bank Annual Report 2015, when just these two voluntary insurance programmes are taken together, only less than 4% of the paddy-cultivated area (on average) is insured during 2003-2015. In most of the cases, crop insurance is obtained as a requirement in getting agricultural loans.

A survey of 750 farmers, conducted as a part of a research study by the Institute of Policy Studies of Sri Lanka (IPS) last year, in selected sites in the Anuradhapura district revealed that the demand for existing insurance schemes is considerably low.  Over 31% of the farmers interviewed during the survey mentioned that they are not aware of how crop insurance work.  Another 23% of farmers have doubts regarding the process of crop insurance.  Most farmers during the discussions highlighted that they do not understand the real benefits that crop insurance bring in for small-scale farmers like them.

Farmer unawareness seems to be a major barrier for taking up insurance in the rural areas.  There has been a compulsory crop insurance programme introduced in 2013 by the government, which was bundled with the existing fertilizer subsidy programme.  A mark-up was added to cover the insurance premium when obtaining fertilizer at a subsidized price.  Due to the compulsory nature of the programme, the area percentage insured recorded 72 and 90 during 2014/15 Maha and 2015 Yala, respectively.  However, lack of awareness of its intended benefits is also an issue with regard to this scheme.

Index-based crop or weather insurance has been receiving much popularity particularly in developing countries (such as in India, Kenya Ethiopia), as a way out for certain inefficiencies of indemnity-based crop insurance.  In index-based weather insurance, the payout is based on a certain weather index, for instance, rainfall.  The weather index is correlated with the crop yield.  Index insurance is characterized by low transaction costs, as it does not require crop damage assessments in the field.  In addition, it lacks moral hazard and adverse selection problems, which are associated with traditional indemnity-based insurance products.

Sri Lanka has a very short history in this regard. It is vital to implement an effective awareness creation programme to educate farmers on the benefits of index-based crop insurance.  However, the discussions with key stakeholders reveal that there are several technical challenges in implementing index-based insurance in Sri Lanka.  The absence of required rainfall and yield data are significant in this regard.  Lack of weather stations and delays in getting data on a frequent basis are attributed to the unavailability of rainfall data in most cases.

What Works for Sri Lanka?

As of now, crop insurance is not a popular tool for climate risk management, although both public and private crop insurance schemes have been in place in Sri Lanka for several decades.  Given the recent variations in climate patterns, it is important to identify gaps with regard to crop insurance take-up as a risk management strategy.  In particular, the aspects of crop insurance demanded by farmers have to be researched in the case of Sri Lanka.

IPS is currently conducting a comprehensive research to study risk management strategies of farmers and demand for climate insurance amidst a changing weather pattern.  The study aims to bring in suitable policy recommendations to help farmers better manage climate risks and improve adaptation.

This article is based on an IPS research study titled Risk Management Strategies and Demand for Climate Insurance by Dry Zone Farmers in Sri Lanka, funded by the Global Development Network (GDN).  The research proposal submitted by Kanchana Wickramasinghe won First Prize for the Japanese Award for Outstanding Research on Development in the Global Development Awards and Medals Competition of the GDN in 2014.