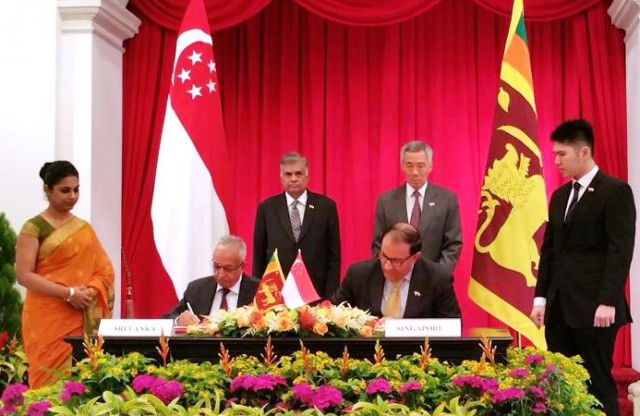 Singapore and Sri Lanka officially launched negotiations for a FTA by the respective trade ministers on 18th July 2016; the event was witnessed by Prime Ministers Lee Hsien Loon and Ranil Wickremesinghe, who was in Singapore on a two day visit. This follows the visit to Sri Lanka of S. Iswaran, Trade and Industry Minister of Singapore, in June, who stated that “The potential for a good quality bilateral free trade agreement between Singapore and Sri Lanka is there. Our officials have done the studies, and they feel both sides stand to benefit significantly, and it will smoothen the way for our business commitments to work together.” In turn, Minister for Development Strategies and International Trade, Malik Samarawickrama agreed that there would be mutual benefits for both countries under a comprehensive FTA. Subsequently, the first meeting of the trade negotiating officials from both sides met and the foundation was laid for the next rounds of negotiations.

In recent years, Sri Lanka has lagged behind in pursuing FTAs compared to its neighbours in South and South East Asia. At the moment, Sri Lanka has only four trade agreements – two bilateral agreements with India and Pakistan and two regionals with South Asia and some Asia Pacific countries – and one in the pipeline with China. In comparison, Singapore has a network of 21 bilateral and regional FTAs in force with 32 trading partners. In 1992, Singapore signed its first FTA, the Common Effective Preferential Tariff Scheme with its ASEAN neighbours and its first bilateral agreement with New Zealand in 2000. More recently, it has concluded negotiations on three agreements with Turkey, the EU, and 12-TPP countries – these agreements are yet to be implemented.

Singapore’s growth strategy over the past decades has been based on a policy of outward orientation and reduced barriers to international trade and investment. While being fully committed to the WTO, it has simultaneously pursued trade liberalization through the regional and bilateral routes in order to sustain its global competitiveness in the international market.

Singapore’s FTAs aim to drastically reduce or completely eliminate customs duty to facilitate cross border movement of goods between two or more countries. A majority of Singapore’s regional and bilateral FTAs focus on progressively eliminating tariffs on all goods within a transition period after the implementation of the FTA. For example, Turkey will remove tariffs on Singapore’s exports on 80 per cent of the products immediately after the FTA comes into force. This will rise to more than 95 per cent over 10 year period. Singapore in turn has granted immediate duty-free access for all imports from Turkey. However, it should be noted that Singapore has on average a duty rate of 0% on all imported goods, and excises duty on few items (liquors, tobacco, motor vehicles, and petroleum products).

In addition to trade in goods, Singapore’s FTAs generally cover trade-in-services and investments and some include intellectual property protection, government procurement, and other cooperation measures, reflecting Singapore’s economic strategy which is shifting from a manufacturing-centric economy towards service and investment-based one. A summary of the key characteristics of some of Singapore’s existing bilateral FTAs is given in Table 1.

In terms of trade in goods, Singapore is not a significant export market of Sri Lanka. In 2015, exports to Singapore amounted to US$ 85 mn or less than 1 per cent of Sri Lanka’s total exports while growth in exports during the last 5 years has been disappointing. Major products exported from Sri Lanka include petroleum oils (other than crude), tea, rubber tyres, previous/semi-precious stone, flour, and fish. As a source of imports, Singapore was Sri Lanka’s fifth main import partner and contributed to 5 per cent of Sri Lanka’s total imports. In 2015, Sri Lanka imported goods worth US$ 923 mn from Singapore and main imports included petroleum products, machinery, electronic equipment, chemicals, plastic, and food stuff.

An FTA will provide Sri Lanka duty free access to Singapore and vice versa for almost all goods — bilateral trade between the two countries can be expected to expand from the current level of just over US$ 1 bn. Moreover, Singapore is an important member of the ASEAN and it is the most liberal economy in the region, with a high trade to GDP ratio. More importantly, a FTA with Singapore will provide Sri Lanka a gateway to larger ASEAN market given that many of the region’s companies are headquartered in Singapore.

An Agreement may also lead to an increase in foreign direct investment from Singapore, which is the fourth largest investor in Sri Lanka. In 2014, US$ 102 mn worth of Singaporean FDI came into the country. Currently, there are over 100 Singaporean companies operating in Sri Lanka and they are involved in a wide range of activities including property development, tourism, food and beverage processing, and telecommunications. To date, Singapore has invested altogether US$ 530 million in Sri Lanka, and Singaporean companies have expressed interest in urban infrastructure projects, construction of Export Processing Zones, projects in and around Colombo, and manufacturing. Interestingly, Sri Lankan companies have invested US$ 120 million in Singapore, and Sri Lanka companies may also benefit from an Agreement due to greater ease in which they can do business in Singapore.  Together with commitments to protect bilateral investments, a FTA can be expected to encourage greater cross-border trade and investment flows between Singapore and Sri Lanka.

In addition, an Agreement with Singapore will include liberalization of the services sector through the provision of national treatment and removal of market access restrictions on service suppliers in sectors committed. Singapore has pursued both a positive and a negative list approaches to services liberalisation with its FTA partners and has liberalized areas of interest to both parties. Service sectors currently liberalized in Singapore include telecommunications, banking, financial, education, and environmental services. However, liberalization of labour mobility has been restricted under Singapore’s FTAs. Even the most spirited free traders like Singapore have been restrained about opening its borders to admit labour from abroad. Singapore’s vision of a ‘Global City’ has resulted in a high influx of both high and low skilled foreign wage workers. Due to public backlash for the high presence of foreign workers in the country (foreigners now make up around two out of five residents), Singapore has tightened its employment of foreign workers more recently. In conclusion, the signing of a bilateral FTA between Sri Lanka and Singapore has the potential to improve trade relations between the two countries. An Agreement will most likely remove customs duty on almost all goods; however Sri Lanka has little to gain in the context of trading goods due to the minimum amount of exports and Singapore’s existing duty free access. Mobility of labour to Singapore should not be anticipated based on its existing FTAs. However, a bilateral FTA has the potential to facilitate an increase in Singapore’s FDI to Sri Lanka while Sri Lankan service providers can gain by having more market access in Singapore.

Authors, Dr. Janaka Wijayasiri is a Research Fellow and Abhinav Pandey was an Intern at IPS.