Can Sri Lanka Eradicate Poverty and Reduce Income Inequality by 2030? 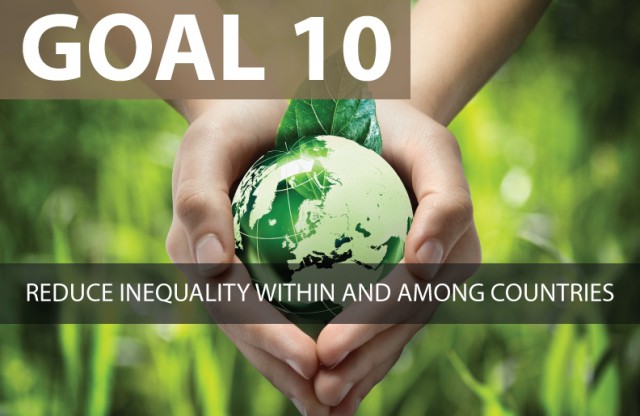 Although inequality in a society is not a new phenomenon, if inequality persists, without proper attention, it could affect the overall economic growth of the country and the efforts to reduce poverty. Reducing incidence of poverty by half and eradicating extreme poverty, are two of the important targets expected to be achieved by 2030, under the Sustainable Development Goals (SDGs). Although many countries including Sri Lanka managed to reduce poverty during the last two to three decades, inequality is still a major concern. Inequality in income represents only one dimension of inequality.  Data on access to education and health, ownership of assets, access to services such as water, electricity, improved sanitation, etc., can also reveal inequality to be quite high, even in countries in which income inequality is not particularly high. As such, due attention should also turn to the disparities in education, health, nutrition, access to various services, as well, to identify the possible inequalities, which may exist, so that appropriate action could be taken to minimize such gaps. In this article, the discussion is limited to only poverty and income inequality in Sri Lanka. However, still there are regional variations, which need the attention of planners and policy makers. The incidence of poverty in the country, declined steadily from 26.1% in 1990/91 to 6.7% in 2012/13 (Figure 1), based on the national poverty line. The proportion of population living below the global poverty line $1.25 a day [2005 Purchasing Power Parity (PPP)], which was used to measure extreme poverty, until 2015, fell from 15.0% in 1990/91 to 3.5% in 2012/13. The other global poverty line, which was also used for international comparisons, was $2.00 a day[1]. The proportion of population below $2.00 a day, declined from 49.5% in 1990/91 to 19.6% in 2012/13. However, the gap between these two poverty lines ($1.25 a day and $2.00 a day) is still high, indicating that considerably high proportion of the population is just above the extreme poverty line and therefore could slip back to extreme poverty due to economic shocks, such as increases in prices of basic essentials, loss of livelihood due to natural disasters or any other reason.

Although incidence of poverty is low in Sri Lanka, bringing extreme poverty to zero level, will be a challenging task. To achieve this, proper identification and precise targeting of people in extreme poverty, for social protection programmes is essential. In-depth analysis of the data, of Household Income and Expenditure Surveys (HIES) conducted by the Department of Census and Statistics (DCS), shows that the poorest people in Sri Lanka are those living in households headed by “agricultural or non-agricultural labourers”, “skilled agricultural workers” and “persons, who are disabled or too old to work”.  As such, further reduction of poverty or eradicating extreme poverty, will depend on precise targeting of most vulnerable groups and on effective strategies to create suitable employment opportunities, in all the regions. Analysis of HIES data, show that some of the most deserving families are not covered in social protection programmes like “Samurdhi”, while those not deserving, continue to receive such benefits.

Bulk of the poor are largely rurally based and majority rely on agriculture for their livelihood.  Although agricultural sector show a relatively slow growth, compared to industrial and service sectors and the contribution to GDP is only around 10%, it does not mean that the agricultural production is declining. It simply means that the service and industrial sectors are growing at a faster rate.

Importance of the Agriculture Sector

It is important to note that around 30.0% of the employed population in the country are still engaged in agriculture and are producing food for 20.3 million people. This fact should not be ignored when developing strategies to reduce poverty and to eradicate extreme poverty.  Pro-poor economic transition cannot be achieved by abandoning the agricultural sector.  Instead, sufficient attention need to be given to:  increase agricultural productivity by improving extension services, introduce new technology and farming techniques, which helps farmers;   provide necessary advice and assistance to setup agro based industries, which could create new employment opportunities for rural youth; continuously improve rural infrastructure and marketing facilities, so that the farmers could easily find markets for their produce.  Promoting sustainable agriculture is the key to achieve the SDG-2 – “End hunger, achieve food security and improved nutrition and promote sustainable agriculture”.

High and growing inequality makes inclusive growth more difficult. Beyond a certain threshold, inequality could harm growth and poverty reduction. Although there was no specific goal on inequality, under MDGs, for SDGs, Goal 10: “Reduce Inequality within and among countries”, is specifically dedicated to inequality. The main target under this goal says, “By 2030, progressively achieve and sustain economic growth of the bottom 40%  of the population at a rate higher than the national average”. The increase in income inequality does not necessarily mean that the poor are getting poorer and rich are getting richer. It is rather, the rich getting richer, at a faster rate. As such, as recommended by SDG targets, it would be necessary to adopt suitable policies, to “ensure progressive achievement and sustained income growth of the bottom 40% of the population at a rate higher than the national average”.

In addition to what has been already recommended above, it is necessary to create more decent employment opportunities for youth in all regions, especially for rural youth and women in general, to reduce income inequality. Labour Force Participation Rate for women in Sri Lanka is extremely low (around 35 %). This could be mainly due to non-availability of suitable employment opportunities closer to their homes. Availability of such employment opportunities, that do not require long distance travel, makes it easier for them to balance child-care responsibilities with work. Flexible working hours and/or facilitating working from home may be attractive to women. This may help in increasing the labour force participation of women, which will increase their family incomes.

At least one family member at a household being employed with a decent, regular income increases the chance of improving the living conditions of the entire family. Many individuals with low skills in particular, remain trapped in precarious jobs, often in informal and unregulated economic activities. In such jobs, even full-time employment tends to be insufficient to lift households out of poverty. As such, well designed active labour market policies aimed at improving skills to meet the demand to reduce the present skills mismatch is important. Thus, creating accessible, productive and rewarding jobs in all regions, without any discrimination, is the key to minimize poverty and reduce inequality.