World Cancer Day – Prevention is better than Cure: A Role for Everyone to Play 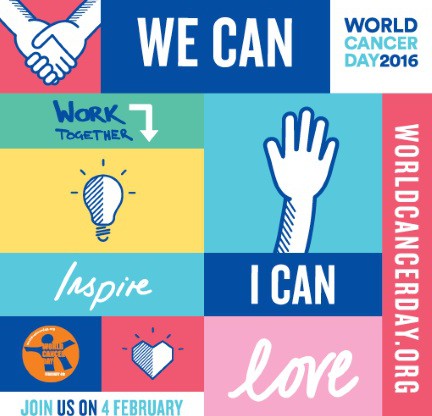 The World Cancer Day is observed today, under the tagline ‘We can. I can.’ A three year campaign has been initiated by the Union for International Cancer Control (UICC) from 2016 – 2018, to create awareness on how everyone – collectively or individually – can play a role to reduce the global burden of cancer.  Recognizing the fact that cancer affects everyone in different ways, it emphasizes that everyone has the responsibility to take various actions to reduce the impact of cancer on individuals, families and communities.

Underlying this formidable task is that nearly 9 million people are likely to die of cancer in the following year if left unchecked with mortality increasing to 13 million per year by 2030. China too recently reported that cancer is a major public health problem in the country; and that chronic infections, smoking and pollution have contributed to skyrocketing cases of cancer. According to the World Health Organization (WHO),tobacco use is the most important risk factor for cancer, while more than 60 per cent of total new annual cases occur in Africa, Asia and Central and South America.

A large proportion of cancer deaths in low and middle income countries have a lower survival rate, largely attributed to delays in diagnosis leading to advanced stages of the disease.  Despite the WHO incurring approximately USD 1.16 trillion on cancer treatments every year, the global battle against cancer will not be won with treatment alone.  Effective preventive measures and a collective effort are urgently needed to ward off cancer epidemic.In an attempt to reduce cancer deaths by 25 per cent by 2025, there has been a call for action in 9 targets (Figure 1) including universal accesses to screening and early detection for cancer, which is the focus of this article. Incidence of Cancer in Sri Lanka and Causes

In Sri Lanka, the number of cancer patients has steadily risen in the past few years to an extent where it has become the second highest cause of hospital deaths in the country. According to the recently released data by the National Cancer Control Programme (NCCP), this trend is observed from 1985 onwards, as depicted in Figure 2.  In 2009, deaths due to cancers amounted to 11,286,  an increase of 377 observed from 2008. Ageing population, urbanization, lifestyle and behavioural changes, and lack of physical activity are some of main causes for the rise in cancer cases reported in the country. Most cancer patients in Sri Lanka seek treatment at advanced stages of the disease at which point currently available treatments are of minimal benefit.  A study conducted by de Silva et.al (2008) found that a large proportion of patients had inaccurate information or was misinformed of the disease.  It was further revealed that a considerable proportion of patients obtained information on the disease from non-qualified personnel such as relatives and other patients.  This signifies that patients hold inaccurate information and receives poor clarification on the disease.  The study also highlighted that there were many misconceptions among patients on the feasibility of various management options.  Although oncologists were involved in imparting information on the management of the disease to a certain extent, a large proportion of patients were only aware of how to manage the disease as they went through the procedure but not at the outset. While those exposed to better education, family income, healthy lifestyles and healthcare schemes supported by employers that fund routine checkups, demonstrate better awareness about cancer, the general public at large is misinformed at every level of the treatment process.

Sri Lanka is not adequately developed to deal with the increasing demands of preventive, diagnostic, therapeutic and follow-up care interventions needed to control the growing cancer epidemic. An inadequacy of funding to invest in comprehensive national cancer registries is evident. Thus, current statistics are based largely on figures from hospital-based registries. However these are often incomplete and the lack of accuracy is further compounded by the under-reporting of cancer cases from those who do not come forward for treatment.

Today, both treatment and diagnostics for cancer are expensive and difficult to obtain in Sri Lanka. The costs of many targeted therapy drugs are high. There are a few facilities for cancer prevention, diagnosis and treatment, with weak referral systems, limited access to surgery, radiotherapy and essential cancer chemotherapeutic drugs. Numerous new drugs used for cancer treatments are presently unavailable due to inefficiencies at the National Medicines Regulatory Authority (NMRA). Despite hospital authorities requesting for stocks from the Health Ministry, there are delays in registering new drugs and the renewal of registration of old drugs.  The Maharagama Cancer Hospital has continued to experience a short supply of approximately 25 varieties of anticarenogenic vaccines since 2010.  This has compelled patients to purchase such vaccines from the private sector at exorbitant prices.

A variety of noneconomic barriers impede the early detection of cancer.  These include cultural and ethnic beliefs and taboos.  Given the inefficiencies in the provision of healthcare delivery, patients are likely to lose confidence and believe that cancer cannot be cured.  Thus, patients commonly resort to alternative healthcare and traditional healers.  Failure to recognize these barriers can doom the success of any cancer prevention program.

The Need for Action

Although the government recognizes the impending issues associated with the prevalence of cancer, there is a vital need for effective cancer awareness campaigns. For example ‘Be Clear on Cancer’ is a public awareness campaign run by the Public Health England in partnership with the Department of Health and NHS England. A key component of the campaign is working with primary care to support General Practitioners to spot cancer symptoms earlier and refer patients to secondary care appropriately. If Sri Lanka can launch a similar campaign, it will not only motivate medical professionals to be involved in the fight against cancer, but also nudge patients to screen for cancer. Mass media such as television, radio, internet, newspapers, magazines, and billboards could thus facilitate this initiative by educating the general public about the importance of cancer screening. Talk shows on both radio and television could be launched to speak about the implications of surviving with cancer so that the stigmatization attached to the disease could be reversed.

Given the rise of cancer in Sri Lanka and a shortage of medical supplies, the Government should approach the WHO for essential medication and vaccines at affordable costs.  For example, Pan American Health Organization (PAHO) has extended support to Brazil, Chili and Mexico by providing Human Papillomavirus Vaccine (HPV), used in the control of cervical and breast cancers, at affordable prices to be introduced in their national screening and immunization programs.

Employers could also play a role in promoting cancer screening at the workplace.  Employers can work with their insurer to ensure that employees Health Risk Appraisals (HRA) assess screening and provide information about benefits coverage and resources for screening. Workplaces can also reduce barriers to screening by allowing employees’ time to seek preventive care without a reduction in pay or any other employee entitlements which would decrease both the barriers and the out-of-pocket costs that prevent some workers from getting screened.

World Cancer Day is a time to reflect on what each of us can do in order to take action to make a difference on individuals, families and the community.  As highlighted, it is apparent that cancer prevention is possible through commitment at all levels – including provision of vaccines, undertaking health promotion and awareness campaigns; integration of health services for access to early diagnosis, treatment and care; as well as supporting development of effective policies and funding mechanisms as observed in the Latin America.