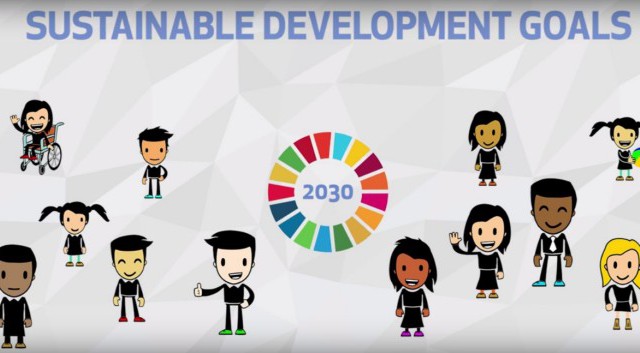 The Sustainable Development Goals (SDGs), also known as the “Global Goals” came into effect this year.  The SDGs are built upon the achievements of the Millennium Development Goals (MDGs), the eight goals that the world committed to achieve, by the end of 2015.  The MDGs, adopted in 2000, aimed at an array of issues that included reducing poverty, hunger, disease, gender inequality and improving access to safe water and sanitation. Considerable progress has been made on the MDGs, in most of the countries includingSri Lanka. According to the “MDG Country Report 2014 – Sri Lanka”, out of a total of 26 indicators, which had clear targets, only two indicators were not on track to be achieved by 2015. Despite this success, there are still disparities between regions, as well as socio-economic groups, which need to be addressed, so that Sri Lanka can be proud of its achievements.

At the United Nations Sustainable Development Summit on 25th September 2015, world leaders adopted the “2030 Agenda for Sustainable Development”, which includes a set of 17 SDGs. To monitor the progress of these 17 goals, 169 targets have been identified and they are to be achieved by 2030. The SDGs and associated targets, which came into effect on 1st January 2016, will guide the decisions that will be taken on development over the next 15 years.

The new SDGs (Figure 1), and the broader sustainable agenda, go much further than MDGs, addressing the root causes of poverty and the universal need for development that works for all people. Unlike MDGs, which had only 8 goals and 18 targets to be achieved within 15 years, the SDGs have 17 goals and 169 targets to be achieved in 15 years, i.e., by 2030. As such, it is not an easy task to implement and regularly monitor them, in order to keep them “on track”, unless proper mechanisms are in place, to do so. The above 17 Goals and the related 169 Targets, are expected to stimulate action  over the next 15 years in the following areas of critical importance for humanity and the planet:  People – to end poverty and hunger, in all their forms and dimensions, and to ensure that all human beings can fulfill their potential in dignity and equality and in a healthy environment;  Planet – to protect the planet from degradation, including through sustainable consumption and production, sustainably managing its natural resources and taking urgent action on climate change, so that it can support the needs of the present and future generations; Prosperity – to ensure that all human beings can enjoy prosperous and fulfilling lives and that economic, social and technological progress occurs in harmony with nature; Peace – to foster peaceful, just and inclusive societies, which are free from fear and violence; Partnership – to mobilize the means required to implement the proposed agenda through a revitalized Global Partnership for sustainable development, focusing in particular on the needs of the poorest and most vulnerable and with the participation of all countries, all stakeholders and all people.

“Achieving the SDGs will require an unprecedented joint effort on the part of the government, civil society, the private sector, as well as the people”

Next Steps – What Sri Lanka Needs To Do?

While the government has a major role to play to get things moving in the right direction to ensure that Sri Lanka successfully achieves the SDGs by 2030, the government alone cannot do it without the cooperation of all stakeholders, including the people. The SDGs will require an efficient monitoring and evaluation framework and a properly planned programme for implementation.

For this, the first step should be the establishment of an effective coordinating mechanism, as activities related to SDGs cut across many Ministries, Departments and a number of other state agencies. Therefore, the country needs to establish a coordinating body with the necessary authority to coordinate and monitor the process of the related activities.

The second important step would be to develop an effective awareness programme, as SDGs are still a new subject to many people and too complex to be understood, mainly due to crosscutting issues, between goals. As a large number of stakeholders will be involved, in the implementation and monitoring process, they need to have a clear knowledge on SDGs and understanding of their responsibilities. The UNDP and other UN agencies may have to take a leading role in implementing an efficient and effective awareness programme, so that each and every stakeholder is mindful of their responsibilities and knows what needs to be done. Therefore, an effective awareness creation programme needs to be implemented among relevant stakeholders.

The third important step is to develop an efficient monitoring and evaluation mechanism and a proper plan for implementation. Data gaps should be identified and action needs to be taken to fill such gaps. Reliable and up-to-date data should be collected, compiled, analyzed and maintained, preferably by the Department of Census and Statistics, in collaboration with other data producers, especially in the Ministries of Environment, Health and Education. To monitor the progress from 2016, it would be necessary to have baseline data, so that the progress from the baseline could be monitored.  It is also important to provide disaggregated data, which will ensure that the inequalities that may be hampering the progress of any particular group or groups or regions, could be identified, so that necessary corrective action could be taken to minimize or eliminate such inequalities.