Ensuring the Rights of Our Children: What More Can We Do? 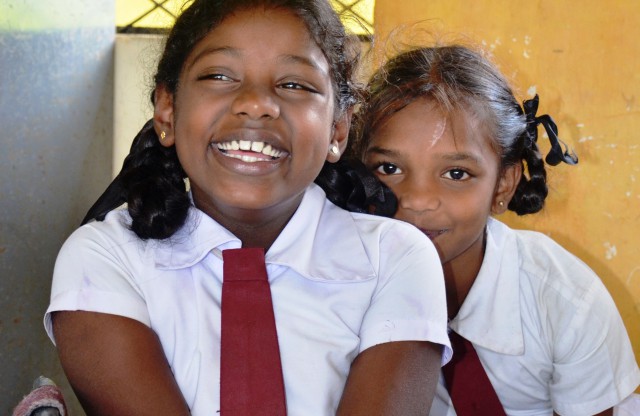 On 14th December 1954, the United Nations General Assembly recommended that all countries institute a Universal Children’s Day, to be observed as a day of worldwide fraternity and understanding between children. The date 20th November marks the day on which the Assembly adopted the Declaration of the Rights of the Child in 1959 while the Convention on the Rights of the Child was adopted in 1989. In Sri Lanka, the World Children’s Day was celebrated on the 01st October, 2015.

The Convention, which is the most widely ratified international human rights treaty, sets out a number of children’s rights including the right to life, health,  education, play, as well as the right to family life,  protection from violence,  discrimination and to be heard. As such, it is the responsibility of all adults, especially of the parents to ensure that children’s rights are protected and to build up a conducive and friendly environment for all children.

Can Sri Lanka be satisfied that the above children’s rights are protected and every child in the country has the right to education, health, play, and to live in a friendly environment?  The answer to this question is ‘yes’, to a great extent compared to most developing countries. But there is a lot more that needs to be done, especially regarding the children of poor families.

Sri Lanka has almost achieved Universal Primary Education, with the net enrolment rate reaching 99.7 per cent, indicating that almost all children in the age range of 5 to 10 years are in school. In addition to this, more than 98 per cent of children aged 10 to 14 years are also attending school, which confirms the effectiveness of making education compulsory for all children up to the age of 14 years. However, after the age of 14 years, some of the children, especially from poorer families, start dropping out of schools. It is estimated that 16 per cent of children in the age group 15 to 17 years are dropping out of school and  are not attending any other educational institute either. These children are mainly from poorer households headed by “Agricultural, Forestry and Fishery Labourers”, “Skilled Agricultural, Forestry and Fishery Workers”, those engaged in “Household Work”, “Non-agricultural Labourers and Similar Workers” and those who are “Unable to or too Old to Work”. As such, special attention of the authorities is essential to ensure that every child in the country will have an education at least up to GCE (O/L), which means the compulsory age for schooling need to be increased.

There are a few other factors which may need the attention of authorities, as well as parents. Although Sri Lanka can be proud of achieving significant progress in the basic indicators on education, the quality of education needs priority attention. There are regional variations in the quality of education, as well as in the available facilities. Inadequacy of qualified teachers and necessary facilities, especially for science education, in schools in remote rural areas and in the estate sector, are a major concern. The children in these areas are deprived of a quality education especially in the field of science and technology, even if they have necessary aptitude and capabilities, because the facilities are not available closer to where they live. Out of a total of 10,012 government schools in the country, 28 per cent have classes up to Grade 13, out of which only one third have a science stream.

As specified in the UN declaration, children’s right to play is as important as the right to education. However, some children in Sri Lanka are deprived of this right, as many parents are too keen on sending their young ones to tuition classes after school. Because of this practice, some children are totally deprived of time to play, with their entire childhood devoted only for education.. For a child playing is equally important as education. Playing helps children in developing social skills, especially to work as a team, in learning to be patient, in improving their creativity, etc. It is not only the education which makes the child ready to take up the challenges they may have to face later in life, when they go out to the society and work with others. As such, it should be the responsibility of the parents to ensure that children have sufficient time to play with other children, as well as on their own, which helps them to improve their imagination and creativity.

In child health also Sri Lanka has done well, except nutrition which is puzzling, as most of the other health indicators show steady progress.  Under 5 Mortality Rate (U5MR) has declined from 21 in 1990 to 10 per 1000 livebirths in 2012 and Infant Mortality Rate has declined from 18 in 1990 to 8 per 1000 livebirths in 2012.  Almost 99 per cent of the children have received all the basic vaccinations, which includes BCG, measles, three doses each of DPT and polio vaccine, before reaching the age of two years.  More than 98 per cent of the births are attended by a skilled health worker, of which more than 74 per cent are doctors. These achievements are mainly due free education and health services provided by the state for more than 5 to 6 decades. However, undernutrition of children under 5 years is still a major concern. According to the latest estimates of the Family Health Bureau (FHB), 17 per cent of  children under 5 years are still underweight. Statistics show that undernutrition starts to increase after the period of exclusive breast feeding, especially after the age of around 7 months, with the commencement of complementary feeding. The problem of undernutrition needs continuous attention of the health authorities, as it is a major health concern for children.

It is the responsibility of all adults to protect the children from any form of violence or maltreatment. Child maltreatment includes: physical abuse, sexual abuse, emotional abuse and neglect. Parents need to take special care to ensure that their children are protected from any form of violence or abuse. Media reports shows that in Sri Lanka, the number of reported cases of sexual abuse of children is increasing, which needs the attention of everyone, especially that of the parents,  to take necessary preventive measures to protect their children. It is always better to take suitable measures in advance to prevent any form of abuse, rather than taking action after the abuse.

The National Child Protection Authority (NCPA) was established in 1998 for the prevention of child abuse and the protection and treatment of children who are victims of such abuse. It is also mandatory for the NCPA to co-ordinate and monitor all actions taken by the law enforcement authorities, regarding all forms of child abuse.  Any parent could contact the authority if they feel that any of their children are being abused or has been abused by anyone. Children themselves could also contact the authority, if they need to talk to any official, regarding any form of abuse they may be experiencing.

What Can We Do?

Despite the satisfactory level of most indicators compared to many developing countries, Sri Lanka still has a lot more to do to ensure that no child is left behind.  Despite the existence of children’s rights, some children suffer from poverty, abuse, neglect, unequal access to quality education, etc. As the convention on the Rights of the Child is addressed to governments, it is the responsibility of all governments to ensure that their rights are protected. However, the task of protecting the children’s rights can only become a reality when they are respected by everyone – parents and other member of the family, teachers and others working in schools, those working in other public and private institutions providing services to children, law enforcement authorities and all levels of government administration. As such, it is the responsibility of everyone to ensure that the rights of every child are protected, as the children are our future.