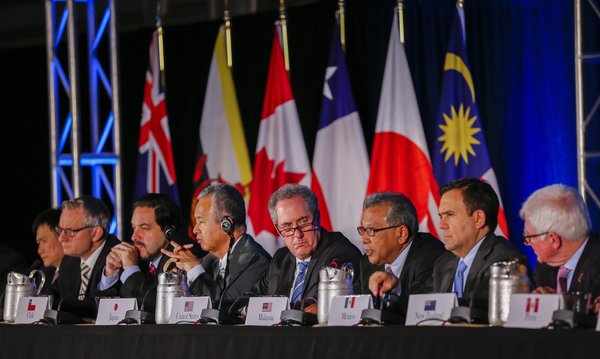 Twelve Pacific Rim countries including USA, Canada, Australia, New Zealand, Brunei Darussalam, Chile, Japan, Malaysia, Mexico, Singapore, Peru, and Vietnam finally saw light at the end of a long tunnel, last month. After five years of intense negotiations, the Trans-Pacific Partnership (TPP) was completed on 4th October in Atlanta, USA.  TPP is the first of the ‘mega- regional’ agreements to be concluded, and is the most ambitious free trade agreement signed to date. It intends to ‘unlock opportunities’, ‘set high-standard trade rules’, and ‘addresses vital 21st century issues within the global economy’.

TPP covers 40% of the world trade and the 12 countries have a collective population of about 800 million. The Agreement includes a wide range of areas such as trade in goods, services, investment, labour, environment, E-commerce, intellectual property rights. However, the lawmakers in each of the countries are yet to ratify the agreement.   It faces difficulties getting through a hostile US Congress and it has become a controversial issue in primary presidential campaigns.

A Cloud on the Horizon?

Supporters of TPP expect to reap significant benefits, and boost economic growth through tariff cuts and a common set of standards.  The trade gains for participating countries seem sizable considering the concentration of trade among TPP members especially with the USA (Figure 1). In addition to the economic benefits, the conclusion of the negotiations was seen as triumph for the US foreign policy, and Obama’s pivot to Asia which is an attempt to keep China in its place.  However, the implications of TPP have been widely debated across the 12 countries. It is viewed as a cloud on the horizon given that not all industries and sectors will benefit. In fact Donald Trump, who is seeking the nomination of the Republican Party to run for US presidential election 2016, called ‘TPP a terrible deal’.

The Agreement has been criticized for lack of transparency, as the five year talks were shrouded in secrecy, and allegedly favoured large corporations. It was viewed to be trading away public health by granting of longer protection to pharmaceutical corporations for their drugs via patents. This will have serious implications on public welfare and affect the price of medicine, making them more expensive.

Those against the TPP also are skeptical about its economic benefits. They worry that governments could be sued by investors under controversial investor-state dispute settlement provisions. There is also the fear that the Agreement could result in job losses. Some in the US are worried that jobs will go to countries with lower wages and less strict labour laws. As such, the Agreement is perceived as a threat to an array of other interest groups ranging from Mexican auto workers to Canadian dairy farmers, and faces domestic resistances in all of the TPP countries.

So, what does the TPP mean for developing countries like Sri Lanka, excluded from the Arrangement?

The trade effects on excluded countries will depend on three factors. First, the geographical distribution of the country’s exports to TPP countries. Second, the similarity of export structures between the excluded and those included in the Agreement. Third, the tariff and non-tariff barriers currently applied amongst the TPP countries.

In 2014, TPP accounted for almost one-third of Sri Lanka’s exports (Figure 2). USA is Sri Lanka’s largest trading partner among these countries and the world; with a quarter of its total exports going to the USA (Figure 2). The country will be significantly be affected by the participation of its largest export market in the TPP. This problem is compounded by Sri Lanka competing with some TPP countries in the US market for similar products. For example, apparels (HS 61 & HS 62) are Sri Lanka’s major export to the world and the US; accounting for 44 and 73 per cent of Sri Lanka’s total exports to the world and the US, respectively. Sri Lanka competes with TPP partners like Vietnam, Mexico, Peru in these products in the US market. However, Mexico and Peru already enjoy duty free access to the US market under existing trade agreements. Thus, the main impact of the Agreement on Sri Lanka will come from increased competition from Vietnam, as tariffs are phased out under Agreement. Currently US applies a tariff rate of 10.8 and 14.4 per cent on HS 61 and 62, respectively from Sri Lanka and Vietnam. With the phase-out of tariffs under TPP, Sri Lankan apparel exports to the US might be forced out of the market or reduce the prices to remain competitive vis-à-vis Vietnam, which will enjoy a duty advantage equivalent to the MFN rate. There is also likely to be trade diversion to Vietnam and to a lesser extent to other TPP partner in other products (Figure 3).  However, the extent to which Vietnam can make use of the duty reductions under the Agreement will depend on fulfilling certain rules and the tariff liberalization programme. TPP also plans to liberalize trade in services and investment flows. For services, the impact on countries outside the TPP will depend on whether such liberalization is preferential or erga omnes. As in the case of services, the potential for investment diverting away from countries excluded from the Agreement depends on how the way will be implemented. Still, there might be some investment diversions to take advantage of a larger market under the Agreement. Vietnam is considered amongst the biggest winners of the Agreement, closely followed by Malaysia. For example, analysts predict the deal would boost Vietnam’s growth and exports by 11 per cent and 28 per cent, respectively, in the next 10 years. To avoid exclusion from an agreement involving their competitors, some developing countries have indicated that they want to join the TPP.  Countries such as Colombia, Costa Rica, the Philippines, Laos and Indonesia are among the countries that have already expressed an interest.

In the Economic Policy Statement, which was released on 5th November 2015, the need to address TPP was mentioned but short of suggesting how the government intends to do this. There have been calls by some academics for Sri Lanka to join the TPP, which would also trigger much needed but difficult reforms in the country. Others have suggested Sri Lanka to review its prevailing trade negotiations strategy and engage in bilateral deals with the US, and the EU to mitigate the negative effects of TPP. However, it is important to note that the TPP was designed primarily by developed countries with their own concerns in mind. While poorer countries may feel pressured to join to avoid being excluded from an agreement involving their competitors, we may not be ready to adopt many of the provisions in agreement.  One may recall Sri Lanka’s own experience with negotiating a Comprehensive Economic Partnership Agreement (CEPA) with India sometime back, which only covered trade in goods, services and investment. In the event the TPP becomes a reality, Sri Lanka must carefully assess the costs and benefits of joining the Agreement with due stakeholder consultations. Meanwhile, it is best that Sri Lanka urgently improves its export competitiveness by addressing constraints on multiple fronts, including supply side capacities and weaknesses in the business environment.