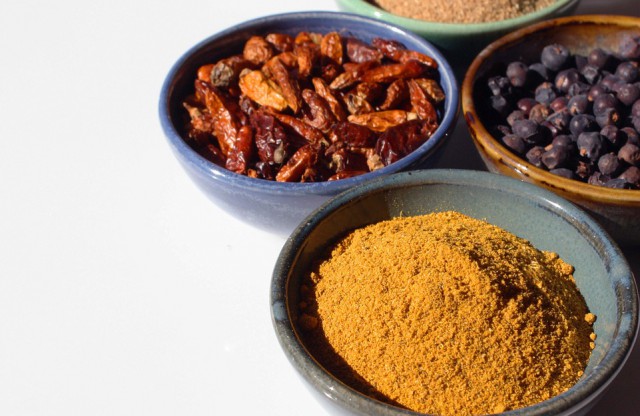 Over the years, spice and coir industries in Sri Lanka have built an international reputation in supplying of premium high quality products to the world market. While cinnamon, cloves and pepper are top spice exports, coir fibre pith, coir-based brooms and brushes, and molded coir products are the country’s main coir-based exports. However, both lack the supply capacity to meet the world market demand. Insufficient raw material and labour shortages are some of the reasons. At the same time a number of other barriers hinder the flow of exports. While some of the barriers are domestic, others are imposed by the importing countries.

Spices and coir are also amongst the few industries in the country with a high female participation rate. In these industries, women are predominantly involved in labour-intensive activities and they are highly concentrated in the upstream ends of the chains. In the case of cinnamon, for example, women are engaged in harvesting to bundling of cinnamon quills, as shown in the Figure. Given that the female labour force participation is as low as 30% in Sri Lanka, it is important to develop these industries and thereby increase the participation of women. A recent research carried out by IPS attempted to identify difficulties faced by spice and coir exporters in accessing potential regional markets in South Asia. Reducing or removing barriers to exports could not only help increase spice and coir exports but also further women’s participation in these industries. At times spice and coir exporters have reported that they face undue delays in obtaining certificates because of inadequate testing capacity of local standards institutes. Exporters claim that it can take up to 2-3 weeks to obtain certain certificates. At the same time, some of the local labs are not equipped to carry out tests and issue international certificates required by buyers abroad for specific products (i.e. geotextiles, cinnamon oil). As a result, exporters have to obtain such testing reports/certification from countries like USA and Germany.

Testing capacity of laboratories in the country needs to be upgraded.  Also, they need to improve the efficiency in the delivery of their services. Further, testing capacities, which are currently unavailable in the country, need to be established to cater to the growing demand of markets abroad. Strengthening the domestic testing infrastructure will result in reducing the costs borne by exporters; for instance, demurrage and other costs entailed in clearing products at the port as a result of delays in submission of test certificates can be reduced.

Difficulty of SMEs to qualify for tax-free raw material imports

In addition, SMEs often find it difficult to compete in the international markets due to the high cost of production and lack of effective marketing. For these reasons, relevant public and private institutions can provide the necessary assistance in terms of tax incentives and support services to improve their competitiveness as well as the visibility of SMEs involved in exports.

Inefficiencies in certain government authorities can cause long delays in the export process and as a result exporters can incur significant costs, as elaborated by one of Sri Lanka’s largest exporter of coir-based products :“I can remember CDA (Coconut Development Authority) took 20 days to issue a certificate that could have been issued within 10 days. And the container had already arrived in Australia and the customer could not clear the container because of the certification.”

Much of the inefficiencies within institutions are reportedly caused by attitudes of officers-in-charge. In this respect, the attitudes of government officials, who are responsible in providing services to traders, need to improve and become business-friendly.

Ad hoc regulatory changes have also caused operational difficulties. For example, owners of some coir yarn mills, which have been in operation for over 100 years, are now faced with new environment laws due to their locations becoming residential areas. They find it unfair by them as they have been there before the houses were built, and hold the municipality and housing development authority responsible for allowing houses to be built in the vicinity of the business.  Exporters feel that regulations need to be flexible and provide them with a grace period to adhere to the changes, especially for industries or companies with good business records.

Lack of investment in value addition

Moving up the coir and spice value chains and adding value to the product is important not only in terms of competing internationally but also to command a better price. Currently, bulk of spice exports is sent abroad in raw form with little or no value addition in the country. Exporters find it difficult to upgrade their products and processes mainly due to the lack of capital. Respective exporters and trade associations stated that government assistance is required in this regard.

Some export markets require testing and health certification to be carried out in their countries rather than in Sri Lanka. For instance, countries like India only accept the fumigation certificates issued by their own authorities. This results in additional costs and delays which can be minimized if the two countries or the region can harmonize standards and recognize each other’s tests and certification. Such standards-related issues can only be rectified through a carefully negotiated MRA that is fair by both trading partners.

Prevailing export subsidies in partner countries have hurt the competitiveness of Sri Lankan exports. For instance, under the Export Market Assistance Scheme (EMAS) Indian government offers a variety of subsidies to its exporters, enabling them to reduce their prices and better compete in the world market. Such practices have negatively affected market share of other export countries including Sri Lanka.

Exporters face difficulties in accessing markets due to political instabilities and security concerns in certain South Asian countries. For instance, multiple checks are carried out on consignments in Pakistan making trade difficult, as explained by a coir exporter:  “Our trade manager went to Pakistan for a trade show. They were escorted from airport to hotel, from hotel to the exhibition venue and similarly on the way back. They could not visit anywhere else for trade promotions. You cannot really focus and have a business strategy for that market due to this situation.” In addition, red tape involved in clearing goods at the destinations is another barrier hindering Sri Lankan exports.

Given the importance of participation of women in the economy, the role of government is critical in developing and promoting industries where female entrepreneurship is concerned. Successive governments in Sri Lanka have undertaken a number of initiatives to uplift Micro, Small and Medium Enterprises (MSMEs) and exports. However, much more needs to be done to remove barriers to exports by way of:  enhancing domestic testing capacity in the country; providing assistance in terms of tax incentives, marketing etc. to improve competitiveness;changing the mindset and culture at key related agencies, etc. to promote women-owned and led MSMEs in spice and coir chains in Sri Lanka.

This article is based on an ongoing research study by IPS: ‘Products with Regional Trade Potential and Associated Non-Tariff Barriers, with special focus on Women Owned and/or Led Micro, Small, and Medium Enterprises (WMSMEs) – A Case of Sri Lanka’. The study is led by UNDP Asia-Pacific Regional Centre (APRC) with funding from AusAID.

Dharshani Premaratne was a Research Officer at IPS. Her research interests included Macroeconomic policy and planning, International economics and Trade, Regional Integration and WTO issues, and Trade and Development. She holds a MA in International and Development Economics from the Australian National University, Canberra and a BA with First Class (Hons.) in Economics from the University of Peradeniya, Sri Lanka. (Talk with Dharshani - dharshani@ips.lk)