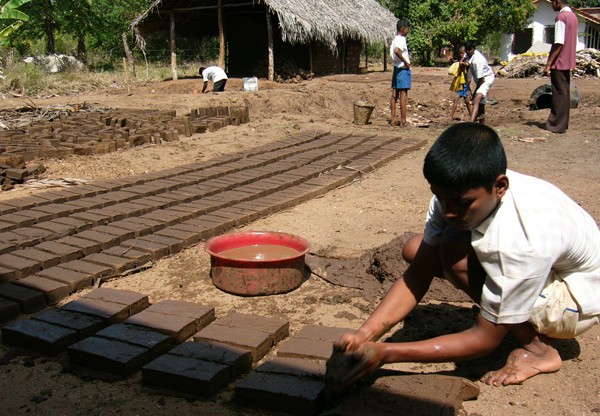 Today marks the World Day against Child Labour, an awareness campaign launched by the International Labour Organisation (ILO) to draw attention to the 168 million children aged 5-17 engaged in child labour worldwide. First launched in 2002, the 12th of June of each year is used to highlight the plight of child labourers and to act as a catalyst for the worldwide movement to eradicate child labour. This year’s theme is “NO to child labour – YES to quality education!” drawing attention to the importance of providing quality education to children as a means to eliminating child labour.

Child labour is defined as work that deprives children of their childhood, dignity and potential. The work involved is hazardous to their health, physical and mental development and deprives them of the opportunity to attend school without interference.  There are numerous factors that lead to child labour such as poverty, entrenched social attitudes, lack of access to quality education, social and economic exclusion, lack of decent work for adults, lack of an adequate legal framework and migration. These factors are often interlinked (with poverty often being the underlying factor) requiring a multipronged approach involving multiple stakeholders to take effective action against child labour. In recognition of this year’s theme for the World Day against Child Labour, this article will look at the importance of providing quality education for all to improve school attendance and reduce child labour in Sri Lanka.

Education is a theme that is particularly relevant this year since the international community is set to adopt the post-2015 Sustainable Development Goals, which proposes inclusive and equitable quality education for all. The UN member states would pledge to ensure that by 2030, all girls and boys have access to free quality primary and secondary education that lead to effective learning outcomes. Eradicating child labour is essential to achieving this goal.  A recent study by the ILO based on worldwide national survey data reveal the interconnected nature between child labour and education. The study found a negative correlation between child labour and the attainment of education goals. It revealed that child labour lowered net primary enrolment ratios, literacy rates and school attendance. Further, the lack of accessible, affordable and good quality education was found to be a push factor for children to take up work.

“Eliminating child labour is in part an educational objective”

The Employment of Women, Young Persons, and Children Act of 1956 states the minimum age of employment as 14 with the minimum age for employment in hazardous conditions set at 18 in line with the ILO Convention 138 on the Minimum Age for Employment. According to the last Child Activity Survey conducted by the Department of Census and Statistics in 2008/09, approximately 2.5 per cent of children from a total child population of 4.3 million were engaged in child labour, out of which 63,916 children were engaged in hazardous forms of child labour. A majority of child labourers are employed as unpaid family workers engaged in the manufacturing industry with the exception of children from the estate sector, where a majority work in agriculture.

Sri Lanka has made commendable progress in achieving near universal access to primary education for both genders with a net enrolment rate of 99.7 per cent. Further, the findings from the Child Activity Survey revealed that 97 per cent of the compulsory school attendance age group (5-14) attended school continuously.  However, older children involved in child labour show lower school attendance rates. 28.5 per cent of children in the 12-14 years age category do not attend school and as much as 78 per cent do not attend school in the 15-17 years age group (Figure 1). Sri Lanka has high school attendance rates for the age categories of 6-10 years and 11-14 years as a result of enforcement of compulsory education. However, children involved in child labour in the 11-14 years age group are at a high risk of dropping out. The drop-out rate for 13-year-olds is 5.1 per cent. According to the MDG Sri Lanka Country Report 2014, school attendance starts to further decline after the age of 14 years, with around 14 per cent of children not completing the GCE Ordinary Level. There are numerous reasons for children not attending school, with poverty being a central impediment, which is closely linked to child labour. Out of these school children, most are more likely to be from poorer families. Parents’ attitudes and perceptions regarding the benefits derived from education against the advantages of engaging in other activities also act as a barrier to school attendance.  If the opportunity cost of education is perceived to be too high, children are more likely to drop out of school and get pushed into child labour.

On the supply-side, regional disparities in access to schools, inadequate facilities and shortage of teachers that affect the quality of schools also contribute to school non-attendance.  This is a particularly important issue for the higher school cycles, where the equity in access is lower compared to the primary level.  Rural and remote schools are particularly affected by the shortage of science and mathematics teachers, reducing the quality of learning outcomes that could be achieved from attending these schools

No to Child Labour – Yes To Quality Education

Child labour is a multifaceted issue. It is largely driven by poverty forcing children to drop out of school, preventing them from acquiring the skills necessary to exit poverty. Therefore, eliminating child labour is in part an educational objective, where improving school attendance, particularly among higher age groups, should be a key component in the policy framework to reduce child labour. The key to improve school attendance and to capture children excluded from education is to provide accessible, affordable and quality education. In spite of welfare measures such as free textbooks, uniforms, school meal programmes, and subsidised bus fares, poverty is still a barrier to education due to direct and indirect costs. For poor households, the opportunity cost of education is often viewed as too high, making the likelihood of children getting involved in child labour high. Therefore, in addition to reducing this opportunity cost through social assistance programmes, it’s important to improve the quality of education that is accessible to the poorer segments of the population, particularly in rural and remote areas by addressing the shortages in resources. In addition, attention should be paid to making education more relevant to the labour market by improving teaching and learning methods that result in better learning outcomes and more returns to education.

Sahan Jayawardana was a Research Assistant at the IPS. He holds a BSc in Economics with First Class Honours from the University of Liverpool. His research interests include poverty and development policy, industrial economics and infrastructure development.