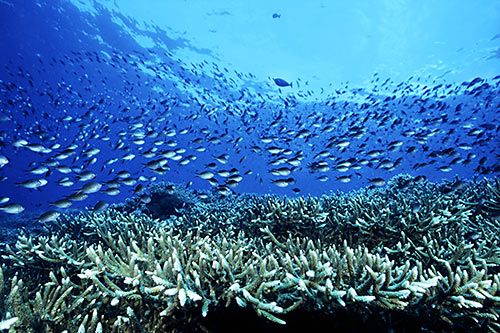 The development process known as ‘Greening’ has been the foremost topic of discussion for years, while ‘Blue’ seems to be the new ‘colour’ entering the ongoing dialogue. ‘Blue’ talks about the use of ocean and its resources sustainably. The blue economy approach will not replace but mutually support the green economy, for the use of ocean resources.

The concept of blue economy stresses on the conservation and sustainable management of oceans.  It is related to the ‘blue’ or ocean capital and complements the green economy.  Accordingly, the blue economy approach recognizes the productivity of healthy ocean ecosystems as a way to safeguard sustainable ocean-based economies, as well as to ensure that coastal countries benefit from their marine resources.

The oceans were on the multilateral negotiations agenda at the Rio+20 Conference in 2012.  The outcome document titled the “Future We Want” highlights the ocean’s contribution to growth, stating; “We stress the importance of the conservation and sustainable use of the oceans and seas and of their resources for sustainable development.”

The Abu Dhabi Declaration, adopted in January 2014 highlights a blue economy’s contribution towards alleviation of hunger, poverty eradication, creation of sustainable livelihoods, and mitigation of climate change. Accordingly, the aspects which were particularly highlighted are:

(a) Fisheries and their vital role in providing food security and sustainable livelihoods,

(b) Tourism as a source of decent employment and a contributor to poverty alleviation,

(c) Ocean as a source of renewable energy from wind, wave, tidal, thermal and biomass sources,

(d) Ocean as a source of hydrocarbon and mineral resources and,

(e) Ocean as the primary medium of global trade through shipping and port facilities.

The commitment to strengthen the blue economy was made at the 14th Meeting of the Council of Ministers of the Member States of the Indian Ocean Rim Association (IORA) in Perth in October, 2014.  The maritime related economic activities were identified as a common source of growth, innovation and job creation. It further highlighted the need for expansion of trade and investment within the region, including fisheries activities, minerals exploration, development of renewable energy, and coastal tourism, in order to stimulate growth and improve region’s food and energy security.

Countries which are blessed with ocean resources have already begun to take policy level initiatives to increase the economic gains of the oceans.  Mauritius has already prepared the Ocean Economy – A Roadmap for Mauritius in 2013.  The roadmap takes into account six principals; economic efficiency, equity, ecological, social partnerships, safety and compliance with international instruments.

Being an island in the Indian Ocean, Sri Lanka is endowed enormously with ocean resources.  Even now, the Indian Ocean is making a notable contribution to various economic sectors of the country, thus to the overall national output. Fisheries, trade, agriculture, and tourism have been key sectors, which are reliant on the ocean resources in Sri Lanka.

Fishery and mineral resources in the Indian Ocean are of direct commercial importance. However, there is much more to be gained, as highlighted in a previous article.  For instance, fishery resources are abundant in the deep sea, and Sri Lanka has not tapped the existing potential.  Deep-water fish stocks represent a potential new frontier for commercial fisheries.  There is also an untapped potential for minerals such as polymetallic nodules and polymetallic massive sulphides.  The coastal sediments contain titanium and zirconium tin.  In addition, the Indian Ocean possesses a number of energy sources, including gas and oil reserves.  The strategic location of the country in the Indian Ocean has brought numerous economic benefits to the country.  Sri Lanka should be tactical in making use of its geo-strategic position.  It is time that the country seriously adopts the blue economy concept and attempt to increase the benefits of the ocean for its development, in a sustainable manner.

It is imperative that the country identify ways in which the contribution of the ocean can be enhanced towards national development.  Still, there can be many unknown factors regarding certain aspects of ocean resources, due to technological and research gaps.  However, the country should prioritize areas it can develop for creating a blue economy facet, in the overall economic development framework.

Meanwhile, from the policy perspective it is important to ensure that proper information is available on different types of ocean resources. This requires a stock taking task.  In line with that, it is important to identify the possible use of such resources, environmental sustainability aspects and resource requirement in terms of financial, human resources, and technological know-how.

We should not forget that the environmental and resource degradation is already taking place in the ocean due to human interventions. Ensuring the sustainability of the resources makes the blue economy viable in the long term. Land-based pollution, over-exploitation of certain fish types, unsustainable harvesting practices are some of the activities that threaten the sustainable utilization of ocean resources.  The Indian Ocean region as a whole should particularly focus on four areas, namely, ocean resources, energy resources, biosecurity and climate change as highlighted earlier.

Sri Lanka plans to establish the Centre of Excellence on Ocean Sciences and Environment, via the Indian Ocean Rim Association (IORA), with the objective of promoting such collaborations among Indian Ocean rim countries. The initiative aims to enhance the sustainable utilization of Indian Ocean resources and increase its role in the economies of its member countries, including Sri Lanka.