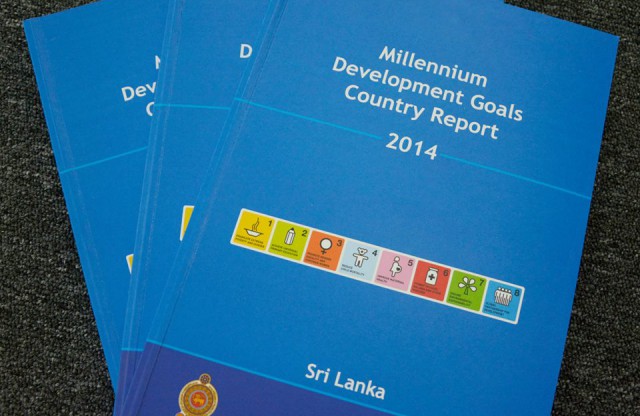 The Millennium Development Goals (MDG) Country Report 2014, compiled by the Institute of Policy Studies of Sri Lanka (IPS) was recently launched in Colombo in partnership with the United Nations (UN) and the Government of Sri Lanka (GoSL). In this article, Wimal Nanayakkara, Senior Visiting Fellow of IPS takes a look at how far Sri Lanka has come in achieving these goals.

In 2000, world leaders signed the Millennium Declaration, which was followed by a set of Millennium Development Goals (MDGs), to be achieved by 2015. There are 44 MDG indicators in total, of which 27 have clear targets. Table 1 gives a snapshot of the status of MDGs at national level for Sri Lanka. The table also compares the status of the indicators in the base year (1990 or closest) with the current status (2013 or closest).

Sri Lanka has achieved the targets for 13 of these indicators by 2012/13 (based on the available data) and 11 were “on track” to be achieved by 2015. Only two indicators were off track. Free education, universal health care, and a number of welfare programmes which were implemented for more than six decades have contributed to the impressive results in education, health and living conditions. More recent policies and programmes related to MDGs have helped to accelerate the progress and achieve some targets well ahead of schedule. While Sri Lanka has made considerable progress pertaining to most of the indicators at national level, there are still considerable regional variations, which need the attention of regional planners and policy makers. Few of the identified gaps and regional variations are highlighted below, which may help in taking suitable action to make an effective final push towards achieving MDGs in all the regions of the country. The details on Sri Lanka’s MDG achievements, gaps and regional variations, as well as some suggestions to minimize those, are given in the “Millennium Development Goals Country Report – 2014”.

Sri Lanka has achieved the target of halving poverty at the national level seven years before 2015 deadline: National poverty incidence declined from 26.1 % in 1990-91 to 6.7 % in 2012-13. All districts, except those in the Northern and Eastern Provinces and Monaragala District in Uva Province, have already achieved the target of halving poverty. In Monaragala District, poverty increased to 20.8 % in 2012/13 (Figure 1), even though it had achieved the MDG target in 2009/10 with a poverty rate of 14.5 %. The Jaffna and Ampara Districts, which were earlier affected by the separatist war have progressed well since 2009/10. Poverty in Jaffna declined from 16.1 % in 2009/10 to 8.3 % in 2012/13, while in Ampara District poverty fell from 11.8 % to 5.4 % during the same period. The regional disparities clearly indicate the need for continuous monitoring and focused attention of planners and policy makers.

Poverty Gap Ratio (PGR), which measures the depth of poverty, has also declined sharply since 1995: The PGR fell from 6.6 % in 1995/95 to 1.2 % in 2012/13, indicating an overall reduction in the level of poverty even for those below the poverty line.  However, income inequality gap persists. As such, the focus of policy may need to be on regional economic development, which will create more employment opportunities across all the regions, especially for women. Another important factor which needs urgent attention is targeting of social protection programmes, which will help the most vulnerable groups in the country. However, after 14 years of age, a decline in the percentage of children is observed in all districts: Only 86 % of those aged 15 to 16 years are in school and only around 60 %continue their education after 16 years, at national (Figure 2). Regional variations are high. It is important therefore to increase the compulsory age for schooling to 16 years, as early as possible. It is also critical for Sri Lanka to improve the quality of education, as well as the education outcomes at secondary and tertiary levels. Sri Lanka has already reached gender parity in primary education.  In secondary and tertiary education, the proportion of girls to boys exceeds 100 %, indicating that more boys leave school earlier than girls, which may need the attention of education planners. Another factor which needs attention is the very low representation of women (5.8 %) in the Parliament.

Free health care services for all, including preventive health services, for more than six decades, have helped Sri Lanka, in reducing infant, child and maternal mortality to a very low level compared to most other countries in the region: Sri Lanka is on track to achieve the target of reducing both the under-five and infant mortality rates by two-thirds the level of the base year (1990) by the end of 2015. The proportion of one-year-old children immunized against measles increased from 95.5 % in 1993 to 99.0 % in 2011. However, proportion declined to 95 % in 2012, which needs the attention of health authorities.Maternal Mortality Ratio (MMR) declined from 92 deaths per 100,000 live births in 1990 to 33.3 in 2010 and is “On track” to achieve the target. The proportion of births attended by skilled attendants, has almost reached the target of 99.8 % by 2010. The Family Health Bureau (FHB) of Sri Lanka has taken many initiatives in recent years to enhance the quality of maternal and child care. Although Sri Lanka has done well in improving maternal and child health, nutrition status of children under five years, is still a major concern, as more than one fifth of the children under five years, are under weight.

Although Sri Lanka remains a low HIV/AIDS prevalence country, the number of cases is gradually increasing: Through 2012, a total of 1,649 HIV cases and a total of 432 AIDS cases have been reported. As such, continuous monitoring, proper detection and improvement of the facilities for treatment are needed, if the disease is to be controlled.

Sri Lanka has managed to bring malaria cases down from around 400,000 in the early 1990’s to 124 cases by 2011 and has no malaria related deaths since 2007:  Country should be vigilant to prevent a reoccurrence, as the disease has re-emerged  whenever mechanism for preventions have weakened,  .

Tuberculosis (TB) still remains a public health problem in Sri Lanka: Around 8,000 new cases are reported every year.  TB prevalence rate shows a slight decline from 118 per 100,000 people in 1990 to 115 in 2004, and since then rate has stabilized. Overall treatment success rate has increased from 78.6 % in 2000 to around 85 % since 2004. Among the main challenges in controlling the disease are: maintaining adequate staff, reaching population groups with limited access to services, scaling up TB control services among returning migrants and the resettled population in the Northern and Eastern Provinces, overcoming TB-related stigma and financial sustainability.

Although Sri Lanka has made significant progress towards achieving the majority of the MDGs, at national level, further efforts are required to minimize the regional disparities. It is also important to sustain and further improve the progress beyond 2015. In addition, Sri Lanka will also have to gear itself to handle the 17 Sustainable Development Goals (SGDs) and accompanying targets, proposed by the UN, which are expected to be adopted, in September, 2015.