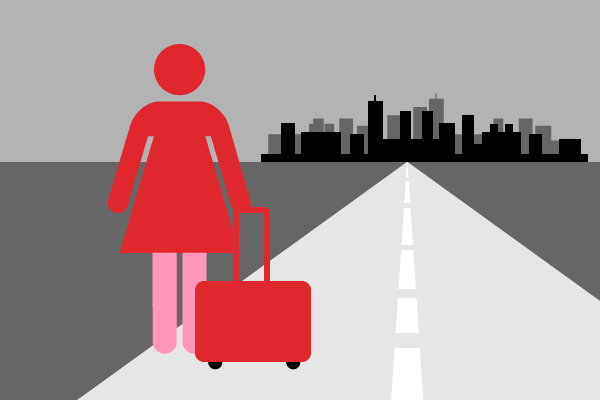 Female migrant workers make a vital contribution to the Sri Lankan economy, mainly through remittances. However, this economic gain often comes at a heavy social cost on the children they leave behind. This article, written to coincide with the International Migrants Day, is aimed at highlighting the discriminatory nature of the recent restriction on labour migration of mothers.

As seen in Figure 1, females dominated migration for employment from Sri Lanka over the last two decades. But since 2010, the number of women departing for foreign employment has been lower than men, declining to 40% in 2013 (see Figure 1) (CBSL, 2013). One of the aims of this directive is to minimize the psycho-social cost on children of female migrants, through the Family Background Report (FBR). The FBR, prepared by the Development Officers (DO’s) of the MFEPW is a mandatory requirement for female labour migrants from Sri Lanka.

The restrictions imposed through the FBR are  often perceived as `discrimination against Sri Lankan women in relation to the right to migrate’(UN Special Rapporteur on the human rights of migrants).    It discriminates migrant mothers of younger children against mothers of older children, and female parents against male parents of young children who can migrate for foreign employment without restrictions.

For many mothers from low income families, migration is the only viable livelihood option. For some it is a strategy to overcome domestic problems, including abusive spouses. In such cases, the FBR requirement perpetuates their difficult situation at home.  This system also promotes corruption, a market for forged FBRs and female migration through clandestine channels, as the FBR only applies when migrating through lawful channels.

It is an established fact that the presence of a mother is critical during a child’s key growth years. A survey  by the Ministry of Health and International Organization for Migration (IOM)  in 2011 found that 23% of female migrants in Sri Lanka had children between the ages of 1-3 years, while 33% of females had children between the ages of 4-6 years.  The well documented negative association between a mothers’ migration for employment and children’s socio-economic outcomes supports the rationale behind the FBR requirement.

However, as highlighted earlier, if the presence of a mother leads to a trade-off in funds needed to access vital inputs for a child’s well-being such as food, shelter, clothing, education and health care, such situations may also lead to a mother being stressed and helpless, which might also negatively contribute towards the child’s well-being.

In this case, what is more important – a mother’s right to choose her job or a child’s need to be raised by her mother?

In this conundrum there is no clear cut answer. As mentioned by  the Ambassador/Permanent Representative of the Permanent Mission of Sri Lanka to the United Nations, this “is neither an act of discrimination against women, nor a restriction of their freedom of movement and the right to work, but a reasonable classification to promote a more balanced view of all rights involved in the decision to migrate, taking into account the need to safeguard the family unit as the fundamental unit of society”. Hence, the FBR should be promoted for its merits while minimizing negative implications.

The blanket nature of this directive could be relaxed, where compelling cases with children under 5 years have an avenue to pursue foreign employment when adequate arrangements are made for alternative care arrangements. This can be done under strict and continuous supervision and guidance provided by the MFEPW and other applicable agencies such as National Child Protection Authority.

“In this case, what is more important – a mother’s right to choose her job or a child’s need to be raised by her mother?”

In addition, its discriminatory nature could be addressed. At inception, the FBR was expected to be a requirement for all migrant workers.  However, limitations in manpower and logistics led to the FBR initially being made mandatory only for females.   Therefore, if the FBR is made a requirement for all  labour migrants, it would not only minimize its discriminatory aspects but would also contribute more towards the well-being of the children who are left behind. The FBR could recommend that male migrant workers with dependent children provide adequate support to their wives in order to assume the dual roles of parenting. However, such an expansion would revert back to the logistical issue that resulted in the FBR being implemented only for females.

Currently, there are three DOs of the MFEPW for each of the 330 administrative divisions in Sri Lanka, which translates to a little over one FBR per day per officer. If such a workload is unmanageable for these officers amidst their other duties, perhaps they can seek the services of DO’s appointed by other ministries. Additionally, family evaluation for FBR could be further streamlined and aligned with duties of the DO’s of all ministries, to eliminate duplicate visits to a given neighbourhood by officers appointed by several ministries.

As this article highlights, there is a need to review the way in which the restrictions on female migrant workers are implemented. If the gaps are addressed, it would help minimize the discriminatory nature against female migration workers, while providing balanced opportunities for the well-being of migrant mothers and their children.