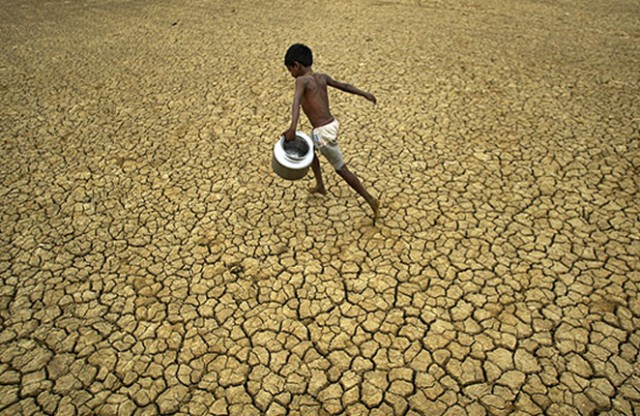 The frequency and severity of droughts in Sri Lanka appear to be increasing. How can irrigation and agriculture improve to tackle future droughts, or are climate change effects catching up too quickly? Here’s 5 things you ought to know…

Many parts of Sri Lanka faced a severe drought in the past few months, with some regions (especially the North and East) not having received significant rains since November 2013. Estimates suggest that across six provinces, over 1.2 million families were impacted and nearly 200,000 hectares of rice fields (approximately 20% of the cultivable area) have been affected by the drought. The devastating impacts on lives and livelihoods will be felt for some time, and beyond the immediate relief measures taken by the government, donors and civil society, it is important to think of ensuring better drought resilience for the future. The Talking Economics Editorial Team met with IPS Research Economist Chatura Rodrigo, who specializes in agriculture and environmental issues, to find out more about the underlying issues and what can be done about them…

1. Could this drought have been prevented or was it all the fault of nature?

In general, droughts are a part of climatic variability and – long-term climate change can increase the frequency and severity of their occurrence.  So, droughts are not preventable. However, socio-economic impacts of droughts are determined not only by the physical hazard alone but exposure, vulnerability and coping capacity of communities also. Situation of these factors can be improved. For instance, meteorological data and analysis have the capacity to warn people about the likelihood of droughts in the short run as well as long run. What can be done is to better prepare for them. The effort needs to be better coordinated in terms of physical, human and financial resources.

2. Are the irrigation systems keeping pace with these changes?

Sri Lanka has a well-established irrigation system. However, due to poor management of watersheds and inappropriate maintenance these systems are not functioning fully efficiently.  Even though there are tanks that could store water and release them in drought situations, siltation and poor maintenance have limited the water holding capacities of most of them. There are a couple of programmes already in place to address these issues. One such programme will deploy one member from each family to the reconstruction of irrigation canal ways and rural access roads on a payment basis. According to official sources, they will be given 8 to 12 days work per month for a maximum payment of 6,000 rupees. Excess silt and mud sediment in reservoirs and tanks will be removed and distributed among the rural bricks and tile earthen manufacturers, free of charge.

3. Are we seeing an increase of extreme droughts like this?

Droughts are not uncommon for countries like Sri Lanka. However, with the impacts of climate change the frequencies and the intensities of these events have increased. In the future there will probably be more droughts and so it is important to be ready and learn lessons from previous events. The places where droughts might occur may change over time, along with the changing rainfall patterns and shifting of agro-ecological zones.

4. What are the longer term solutions to help these areas be resilient for droughts like this?

There are couples of things that need to be done. First of all, the ability to identify and predict future drought events needs to be increased.  This is the primary responsibility of the department of meteorology.  While there are enough data to do so, capacities of analysis needs to be improved. From an agricultural point of view, drought resistant plant varieties need to be developed. While there are some varieties already in place they might not be adequate for severe droughts that could come in the future. In addition agricultural methods must look for less water intensive approaches. Rain water harvesting is also important. This has to come from the attitudinal of the people. Sri Lanka does not have a good reputation of saving water when we have plenty. Harvesting rainfall water will allow minimizing the impacts of droughts. Finally, there should be a better way of learning from past experiences. This is not the only time that Sri Lanka has faced a drought but still the efforts show that we are not yet ready for a similar situation in the future. Coordinating and information sharing becomes ever more important.

5. What changes can we make in agricultural practices to help prepare for changes in weather patterns?

Agriculture practices that conserve water better are a key determinant in drought impact management. Rather than cultivating as usual, it is important to identify changing weather patterns. To do that, information from the Meteorology Department is crucial but farmers own knowledge is also important. Farmers have, over time, developed many methods to cope with situation like these and that indigenous knowledge needs to be disseminated. More research and development is also the key to identifying new drought-resistant plant varieties. Finally information communication technology can play a major role in better information dissemination, especially in disaster relief efforts and sharing of climate change and cultivation information.