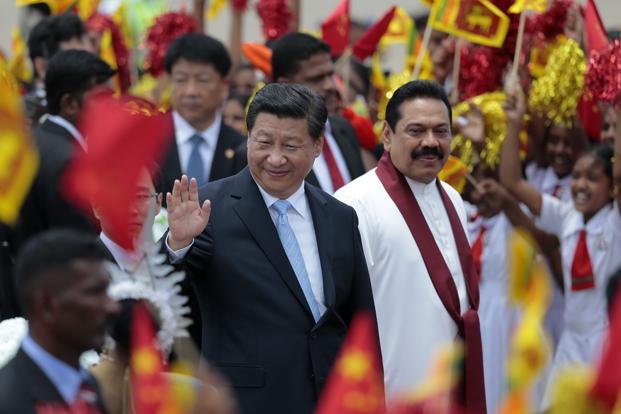 Chinese President Xi Jinping’s two day visit to Sri Lanka, the first by a Chinese leader in nearly 30 years, has marked a new milestone in bilateral economic relations between the two countries.

Coinciding with this, we present a snapshot of IPS researchers insights (including audio interviews) on this growing relationship, and what the future holds in store particularly in the context of the launching of a Free Trade Agreement.

China’s growing presence in Sri Lanka is part of a broader trend of China’s growing influence in the South Asia region. As Dr. Kelegama, IPS Executive Director, argued in an op-ed to the East Asia Forum in June on China’s growing influence in South Asia, since the late 1990s China’s trade and aid links with this region has been growing faster than India’s, “In 2012, India’s trade with its South Asian neighbours — those in the South Asian Association for Regional Cooperation (SAARC) — amounted to US$17 billion, compared to China’s trade with the same countries which amounted to US$25 billion. China is currently the largest trading partner of India, Pakistan and Bangladesh, and the second largest trading partner of Sri Lanka and Nepal.” He added that, “Chinese trade and investment links have led to growing Chinese financial flows in the form of loans and aid to the region since the mid-2000s. Most of these loans are associated with large infrastructure projects such as ports, highways, bridges and power plants.” This is evidenced in Sri Lanka too, with the majority of the agreements being signed during President Xi’s visit being on various infrastructure development projects.

In an interview with the editor of ‘Talking Economics’ this week, Kelegama reviewed the recent trends in China-Sri Lanka economic relations, particularly relating to the soaring Chinese development assistance for Sri Lanka’s infrastructure thrust. He described how since the mid-2000s, China “gave a very significant helping hand to Sri Lanka” in financing defence expenditure during the war, and subsequently shifted to financing infrastructure development. Given the large infrastructure deficit following the end of the war, Chinese assistance was pivotal, according to Kelegama. “This gap China filled very effectively”, he observed. He added that, “Of course questions are being asked in regard to the repay period, interest rates, etc. Now they are not that important specially given the fact that most of this financial assistance are for long periods with long repayment periods. Assuming that the returns from these projects are rapid, we should be in a position to repay the debt we owe to China.”. To hear to his comments on Chinese aid and development assistance in Sri Lanka, listen to the audio clip embedded below. (If you’re having trouble listening below, click here to open in a new window)

One of the key recent Chinese-funded projects has been the Colombo South Port. In an interview with Bloomberg last year, IPS Deputy Director Dr. Dushni Weerakoon observed “Sri Lanka has been looking toward China because of the availability of funding […] With Sri Lanka’s plans to create a hub concept, expansion of the Colombo port makes good economic sense.” Many are of course pointing to the geo-strategic implications of China’s close and growing ties with Sri Lanka. In an interview with Bloomberg this week, Weerakoon noted that “China’s growing influence must surely be a cause of some concern to both Japan and India, evident from renewed Japanese interest in Sri Lanka and a more supportive approach by the new Indian government”, and “Sri Lanka stands to benefit from its growing economic links with each of these countries, but it will also require a careful balancing act on the political front.”.

While Chinese financial assistance has soared, private Foreign Direct Investment (FDI) has been slow to come. Dr. Kelegama shed some light on this aspect in an interview with the editor of ‘Talking Economics’. He noted that, “the bulk of China’s investment is made by state-owned enterprises […] if we use the strict definition of FDI, private FDI, China is not an important player in the Sri Lankan market, but since of late Chinese FDI has been increasing in the Sri Lankan economy, that is what the data shows. But if we also take into account the investment from Hong Kong […] then that entire investment is very significant, in fact it comes very close to the Indian investment in Sri Lanka. All these new projects for instance the Shangri La hotel they are all from Hong Kong, not from mainland China.”.

“While Chinese financial assistance has soared, private Foreign Direct Investment (FDI) has been slow to come”

He added, however, that if the yuan appreciates and Chinese firms look to set up in foreign locations, countries like Sri Lanka could stand to benefit. To hear his full comments on Chinese FDI prospects in Sri Lanka, listen to the audio clip embedded below. (If you’re having trouble listening below, click here to open in a new window)

One of the key outcomes of Xi Jinping’s visit to Colombo this week will be the launching of the China-Sri Lanka Free Trade Agreement, which will set the stage for serious negotiations to begin. As this op-ed by Dr. Kelegama in the East Asia Forum highlighted, the growing economic relations (based on development financing) influenced changes in the trade between the two countries as well. IPS released the first ever analysis on the trade potential between China and Sri Lanka under a possible FTA, presented with infographics here. In it, the authors asserted that, “Based on a preliminary analysis of RCAs (revealed comparative analyses), it appears that Sri Lanka and China have comparative advantage in quite dissimilar sectors which suggests that there are complementarities between the two countries to stimulate bilateral trade. Moreover, some of these sectors face high tariff rates in China and as such they are likely to benefit from tariff concessions negotiated under a FTA.”

Coinciding with President Xi’s visit, we interviewed Dr Janaka Wijayasiri, the head of the International Economics Policy Unit of the IPS, to get his views on the proposed FTA with China. You can listen to the full interview in the audio clip embedded below. (If you’re having trouble listening below, click here to open in a new window)

Sri Lanka is likely to benefit from a flexible and cooperative approach in crafting an FTA with China, if China’s existing trade agreements are anything to go by. As IPS research showed, China has adopted a fairly collaborative approach in devising the terms of FTAs with other countries, and Sri Lanka could expect the same. But they pointed to five key areas that must be tackled in the negotiation, in order to have a mutually beneficial agreement. IPS researchers Janaka Wijayasiri and Dharshani Premaratne argued that Sri Lanka must also draw from its, albeit limited, experiences with trade agreements in the past like the Indo-Sri Lanka and Pakistan-Sri Lanka FTAs. Whether it be tackling Rules of Origin (ROO) issues or Not Tariff Measures (NTMs),  they hold valuable lessons for crafting the China-Sri Lanka agreement. In this article, IPS researchers also emphasised the need for greater consultation with domestic stakeholders – “Consultations should not be reserved exclusively to the level of governments – finance, commerce, or and trade departments, but rather with stakeholders at large. This can ease exporter-importer concerns, demonstrate that challenges in the agreements can be addressed in a participatory manner, and help create broader public awareness of, and confidence in, the opportunities and benefits of the agreements.”

This was emphasised by Dr. Kelegama as well, in an article on the challenges posed by the proposed FTA – “An FTA between a large and a small country always poses challenges as stakeholders in the smaller country fear that the larger country will be the overall beneficiary at the expense of the smaller country. Thus a few lessons from the India-Sri Lanka FTA may be useful in the design of the FTA between China and Sri Lanka.”  As Kelegama concluded in a presentation to the National Chamber of Exporters, “All in all, the China-Sri Lanka FTA should be welcomed but there needs to be caution in designing the framework governing it”

Here is an info graphic capturing recent trends in China-Sri Lanka trade. Visit the special ‘China Insights’ series on the IPS blog to read more articles in this area.