Finally Some Good News About the Ozone Layer? 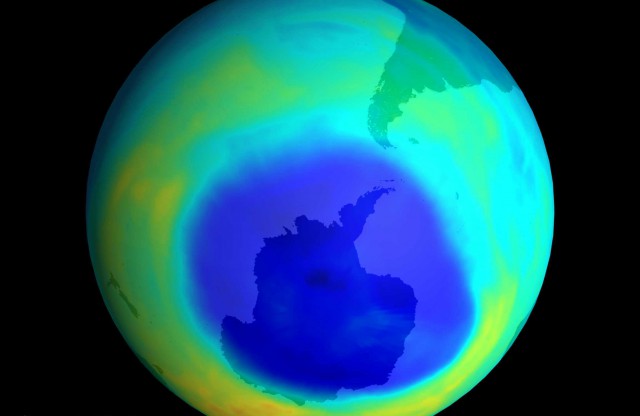 Marking the International Day for Preserving the Ozone Layer today (16th September) Athula Senaratne takes a look at the latest positive news about the recovery of the ozone layer and what this means for environmental and climate change challenges.

There are several days in the global event calendar that are dedicated to matters concerning the environment.  News that we used to hear on these special days often carries negative or alarming facts.  The usual message is that the respective matter of concern is getting deteriorated and the world is finding it difficult to come to terms with the problem.  Quite often, criticisms are exchanged among parties and both the state authorities and public are at the receiving end either for ignoring their responsibilities or irresponsible behaviour.  This year’s ozone day makes a difference. It comes with the good news that at the end, the ozone layer in the atmosphere is recovering and the global community can be credited for their collective effort.

The joint report published by the World Meteorological Organization (WMO) and United Nations Environment Programme (UNEP) brings this good news on the eve of the global ozone day.   The report titled Scientific Assessment of Ozone Depletion 2014 released a few days ago, presents some important facts that is worth wider public attention. This article attempts to highlight a few of the salient messages contained in the report.

The Montreal Protocol is the global arrangement for negotiating the international actions against the problem of depletion of the ozone layer.  Ozone layer is the special zone of atmosphere that contains a higher concentration of ozone molecules which helps to protect the biosphere from exposure to harmful levels of cosmic ultra violet rays (UV). In the absence of ozone layer, exposure to excessive amounts of UV rays could harm humanity by increasing the chances of skin cancer and causing damages to eyes and immune system. Not only are humans but, other living beings in the world are also vulnerable.  During the final quarter of the last century, scientists observed that the ozone layer is getting depleted rapidly and the so-called group of chemicals known as CFC (Chloro-fluoro-carbons) are among the most damaging ozone-depleting substances (ODCs).  These are some widely used substances in industrial products such as refrigerators, air conditioners, etc. Scientists have further observed that the ozone layer over certain parts of the Southern hemisphere has become particularly thin compared to other areas of the atmosphere that popularly came to be known as  the ‘Antarctic ozone hole’.  This has become alarming to inhabitants in those parts of the world including Australia.

The Montreal Protocol helped to form a global alliance against this menace by orchestrating a collective effort of all countries in the world to phase out the ODCs from the world. The new assessment report suggests that actions taken under the Montreal Protocol on ODCs are making the way for the ozone layer to recover towards the benchmark 1980 levels.  So the Montreal Protocol is delivering and this sets an example to follow at a time when the world is struggling to come to terms with the potentially more harmful problem of global warming related to climate change.

Ozone-depleting substances (ODSs) are in decline

The report brings out the following major facts.

The ODSs controlled under the Montreal Protocol continues to decrease. The report finds that major controlled ODSs are decreasing largely as projected and stratospheric abundances of chlorine- and bromine-containing substances originating from the degradation of ODSs are decreasing. It observes that by 2012, combined chlorine and bromine levels had declined by about 10–15% from the peak values of ten to fifteen years ago. However,  it also observes that the group of substances known as hydrochlorofluorocarbons (HCFCs) and halon-1301 are still increasing, which needs unknown or unreported sources of carbon tetrachloride to explain its abundance. It further reports that there is an increase in ozone levels in the upper stratosphere.  According to climate models, this can be explained by contributions from declining ODSs and upper stratospheric cooling caused by increasing carbon dioxide increases.

It looks possible that ozone will recover toward the 1980 benchmark levels in many parts of the globe if the full compliance with the Montreal Protocol is maintained. This recovery can be expected to occur before the mid-century in mid-latitudes and the Arctic and may be followed somewhat later by the Antarctic ozone hole. This implies that the Antarctic ozone hole is likely to continue to occur each spring, as can be expected for the current ODSs abundances until sometime into the future.  It has been observed that the Antarctic ozone hole has caused significant changes in Southern Hemisphere surface climate in the summer. The lower stratospheric cooling due to ozone depletion is considered the dominant cause for observed changes.  In contrast, no robust link has been found between stratospheric ozone depletion and tropospheric climate in the Northern Hemisphere.

The report also points out that changes in carbon dioxide (CO2), nitrous oxide (N2O), and methane (CH4) will have an increasing influence on the ozone layer as ODSs decline. As a result, the evolution of the ozone layer in the second half of the 21st century will largely depend on the atmospheric abundances of those substances. These have a mixed effect over global ozone, with high CO2 and CH4 elevating global ozone while increasing N2O is responsible for depleting global ozone.

However, the world cannot be fully complacent about the situation which is seemingly improving.  The substances known as hydrofluorocarbons (HFCs) currently used as a replacement for ODSs is growing at a rate of about 7% per year and are projected to continue to grow.  If this continues, it could result in HFC emissions of up to 8.8 gigatonnes CO2-equivalent per year by 2050.  The HFCs have high-Global Warming Potential (GWP) and need to be replaced with low-GWP compounds.   Otherwise, the climate benefits of the Montreal Protocol could be significantly offset by projected emissions of HFCs used to replace ODSs.  Hence, more future efforts are still necessary.

The report highlights several other technical aspects that need the attention of the global community and calls for continuation of collective action to consolidate the gains so far achieved for further gains.  In spite of those concerns, overall, it seems the world action is heading towards the right direction and correct initiatives have been taken at the right time.  This conveys one important message to the same global community which is currently passing a treacherous episode of negotiating mitigation of greenhouse gasses (GHG)   for avoiding potentially harmful climate change impacts. It suggests that alarming signals from Mother Nature cannot be left unheeded perpetually and that humanity cannot ignore her calls for ever.  She is benevolent and duly reciprocates when we respond to her warnings. All we need to do is to help her to help us.

Finally, Sri Lankans can be especially happy about the news as we did our best to contribute to this achievement. Even though Sri Lanka is not a major emitter of ODSs, the National Ozone Unit coming under the Ministry of Environment and Renewable Energy successfully carried out a Phase-out Management Plan of ODSs in the region to fulfil its Montreal Protocol compliance targets in advance to the levels specified under the Protocol.  As a result, Sri Lanka managed to phase out Chlorofluorocarbons (CFCs), Halons, Carbon Tetrachloride (CTC), Methyl Chloroform and Methyl Bromide consumed in the country.  So we can be proud of us as a nation that fulfilled its responsibility as a member of the global community.   In this regard, we should be thankful to the National Ozone Unit and the Ministry of Environment and Renewable Energy for providing the leadership towards the right direction.

Athula Senaratne is a Research Fellow and Head of Environmental Economic Policy research at IPS. Prior to joining IPS in 2006, he has gained considerable experience in the management of environmental resources and economic policy in Sri Lanka serving in the government sector. He holds a PhD from Deakin University, Australia. (Talk to Athula - athula@ips.lk)