The Dilemma of Dengue and the Health Economics of It 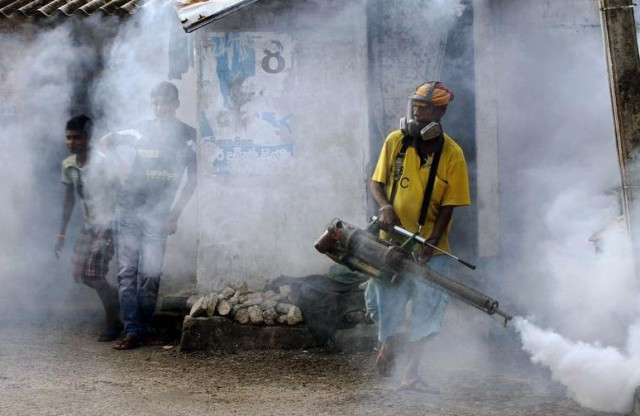 Dengue keeps claiming more lives every month, and the impact on Sri Lanka’s economy and society is getting serious, warns Yolanthika Ellepola.

In the first half of 2014 alone, this ‘deadly disease of the tropics’ infected 20,610 people, in comparison to 32,063 in 2013. According to the Epidemiology Unit of the Ministry of Health, approximately 60% of dengue cases in the country are from the Western Province – home to some of the main commercial hubs in Sri Lanka. Despite there appearing to be strong political will and continued government commitment to eradicate this epidemic, the surge in dengue continues, affecting many individuals and the country as a whole.

The Rise and Rise of Dengue

Dengue shares a fatal bond with rain. In Sri Lanka, two peaks of the disease occur annually alongside the monsoon season, leading to growth in densities of mosquito vectors. The influx of population to capital cities, coupled with problems for waste disposal and management by local governments, have been identified as primary causes of the high incidence of dengue in the country.

According to the Epidemiology Unit, incidences of dengue escalated rapidly to 28,473 cases and 167 deaths in 2011. This trend continued to rise in 2012, with 44,456 cases (and 180 deaths), but declined to 32,063 cases in 2013. However, in the first six months of 2014, the Colombo, Gampaha and Kalutara districts of the Western Province have reported notably higher numbers of dengue cases compared to the rest of Sri Lanka (see Figure 1).

Why is Dengue More Prevalent in the Western Province?

The Western Province has experienced an 11% increase in population density from 2002 to 2012. Rapid commercialization accompanied with new development projects, and the favourable growth outcomes in the Western Province have encouraged migration from rural areas to the more urban areas in the province. More importantly, out of the total population in the country, 28% are clustered within the Western Province. In 2012, urbanization has accounted for population growth in Gampaha and Kalutara districts. With the two Free Trade Zones – Katunayake and Biyagama – the Gampaha district showed a 1% population increase, and Kalutara 1.2%, respectively.

“In the Western Province, 10% of households live with unsatisfactory sanitary facilities and 52% consume unsafe drinking water”

Those at lower ends of the income strata could be more susceptible to dengue, and could also face a greater economic burden from it. Due to poorer housing and other facilities, they may be less able to maintain ideal hygienic and sanitary conditions that help prevent dengue. Additionally, once an income-earner in a family is infected, their lost labour time due to the illness poses an economic burden on the household. This then also impacts the household’s financial capacity to support treatment.

At a macroeconomic level, the overall economic burden of dengue affects not only through the opportunity cost of lost productive time, but also the burden on public health expenditure. Moreover, a continuation of the current outbreak could pose a threat to the country’s tourism prospects. Some foreign governments such as United Kingdom, Australia and the United States have issued health advisories warning travellers about it.

At the outset, it should be stated that ministries alone cannot eradicate dengue. Community participation is paramount. In the absence of an antiviral drug or vaccine, effective mosquito control underpins dengue prevention. Although it is the responsibility of households to keep their premises free from the spread of dengue, local authorities are responsible for community cleanliness, and the continued efforts of the central and local government should be rightly acknowledged. Wide-scale campaigns include improved communal awareness of the epidemic through mobile technology; continuous education of medical and nursing staff in the handling of patients; education campaigns in schools and universities to raise awareness of environment health and sanitation; an inter-ministerial dengue fighting task force; and imposing fines for improper waste disposalsare some of the initiatives that are in place.

In addition, the Public Health Department in coordination with the local authorities have controlled the outbreak through inspection of land parcels and spraying BTI in high-risk dengue areas. Even though BTI could be used to control dengue, the natural bacterium could merely be used in limited areas, as it could lead to adverse consequences for human consumption. However, regrettably, residents have also complained that local government workers have demanded financial incentives in return for spraying mosquito repellent. In a further attempt to contain costs local governments have decided to charge Rs. 1,000 from households in return for spraying mosquito repellent.

Despite the progress made, limited infrastructure for surveillance and control, quality diagnostics, lack of active laboratory based surveillance are many of the challenges that continue to prevail. Apart from that, lack of financial resources and active public participation are also issues in effectively addressing this deadly epidemic. Since the development of the dengue vaccine is at its infancy, vector control is the only means by which the spread of dengue could be curtailed. However, it cannot be denied that vector control is essential to limit the spread of dengue although the development of the vaccine is vital to eradicate the disease.

Dengue has been a major public health issue in Sri Lanka for many decades. The impact of the disease on the country’s economy and society is serious, and can only become worse if not addressed effectively. While commending government efforts to prevent and control the spread of the epidemic, more needs to be done to completely eradicate this deadly disease from the island. A combination of good environment management, effective solid waste management, and a flood retention programme are key elements of mosquito control.

The multifaceted nature of the disease requires efforts among multiple actors – laboratory personnel of multi-disciplines, public health inspectors, and the wider community. Sustaining the gains made in reducing fatalities and continued encouragement and support of doctors, nurses and health practitioners on the clinical management of dengue patients is central. Furthermore, the referral system needs strengthening – ensuring timely referral of patients to appropriate levels of health care. Apart from these measures, Sri Lanka can also learn from countries like Singapore where architects have successfully designed buildings without gutters and have thus successfully tackled the epidemic by using simple, yet, effective mechanisms of mosquito control. More pragmatic and efficient preventive measures are essential in first minimising the risk, and then, eradicating this epidemic, before many more Sri Lankans lose their lives to this deadly disease.