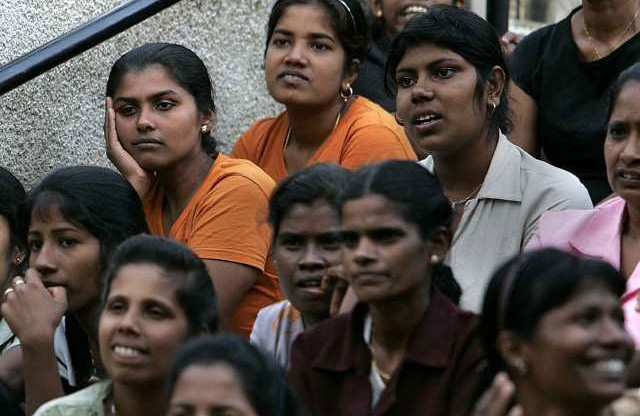 Every year about 250,000 Sri Lankans migrate for foreign employment. The departure of migrant workers helps the domestic economy by easing the pressure for jobs while pumping in valuable foreign exchange. As such, labour migration is a growing priority amongst policy makers in the country. However, they are often challenged by the trade-off between promoting migration and protecting the welfare of migrants and their families.

International migration is a cross cutting phenomenon in Sri Lanka. The stock of migrant workers of Sri Lankan origin stood at around 1.9 million in 2010[1] and they remitted US$ 6.4 billion in 2013 (over 9.5% of GDP[2]). International labour migration became popular in Sri Lanka in the late 1970’s and since then the predominant destinations have been the Middle Eastern countries and most migrants have been unskilled. Over the years, Sri Lankan migrants have gained access to other markets and other skills levels, but unskilled labour into the Middle East continues to account for the bulk of migrants (94% in 2013). Unskilled labour and housemaids together account for nearly 60% of total departures.[3]

Migration involves three consecutive phases – pre-migration, migration and post-migration. Characteristics and decisions such as destination, occupation and skills level, which are relevant in the ‘pre-migration stage’, affect outcomes in the subsequent two phases. Specifically, the departure of females leaving their families behind to pursue overseas employment is associated with significant social costs during the migration and post-migration phases. To reduce the number of females pursuing foreign employment, the Government of Sri Lanka is interested in diversifying migration in terms of skills as well as destinations. But this requires a clear understanding of the labour market for temporary migrant workers in potential destinations – the market structure there, the skills sets that are in demand and their existing supply of foreign labour, as well as of Sri Lanka’s supply of migrant labour.

To reduce the number of females pursuing foreign employment, the Government of Sri Lanka is interested in diversifying migration in terms of skills as well as destinations

In the ‘migration phase’ migrants are immersed in a new country and a new culture, which often leads to various adversities like harassment. Among all migrant occupations, it is female domestic workers who are most vulnerable to such hardship because their living quarters overlap with their working environment. In 2012, nearly 80% (10,220) of complaints made by Sri Lankan migrant workers were by female domestic workers. Their vulnerability to many forms of harassment is an ongoing concern among the migration stakeholders.

While there is a lot of emphasis on the first two phases of migration, there is limited focus on the post-migration phase in Sri Lanka. This phase is important to consider because the majority of Sri Lankan migrants plan to return after working for a few years to accumulate savings (known in migration studies parlance as part of ‘an optimal life-cycle residential location sequence’). This temporary nature of departure promotes remittances and eventual return of the migrant, which marks the beginning of the post-migration phase. Attention to the post-migration phase is critical for migrants to achieve the socio-economic objectives of migration, as many return not only with new skills and accumulated savings, but also strained relationships with those they left behind. As much as potential migrants need pre-migration training, returnees need guidance on socio-economic reintegration after their return.

Policy makers are often grappling with the trade-off between promoting international migration and protecting the well-being of migrants and their families. Policies on migration would be successful if related policy packages are drawn in consultation with all relevant stakeholders; such as migrants, their families, foreign employment agents, relevant ministries and institutions, and researchers. Dialogue and interaction among stakeholders are important precursors for successful migration policy formation. To this end, IPS will hold an ‘International Conference on Policies for Mainstreaming Migration into Development’ on the 14th of August, which brings together local experts and stakeholders with experts from India, Italy, Pakistan and the Philippines. The conference is part of a research and policy advocacy project ‘Meeting the Development Challenges of Migration (MED_MIG)’, which is supported by the Think Tank Initiative (TTI) of the IDRC.