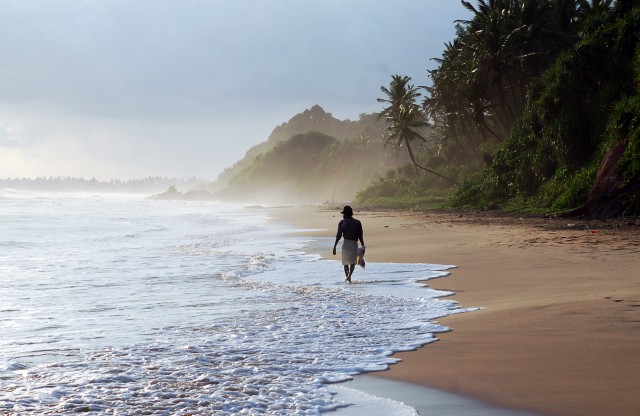 Over the period 1901 to 2010, the global mean sea level rose by 0.19m and will continue to rise during the 21st century. With this rise, coastal systems and low-lying areas will experience adverse impacts such as submergence, coastal flooding, and coastal erosion. In many regions, changing precipitation and melting of snow/ice are altering hydrological systems, affecting water resources of the ocean in terms of quantity and quality. There is evidence that many marine species have shifted their geographic ranges, seasonal activities, migration patterns, and relative abundance and species interactions in response to climatic changes[i].

Ocean acidification poses substantial risks to marine ecosystems, especially polar ecosystems and coral reefs, associated with impacts on the physiology, behavior, and population dynamics of individual species from phytoplankton to animals. The progressive expansion of oxygen minimum zones and anoxic “dead zones” is projected to further constrain fish habitats in Asia[ii]. Global marine species redistribution and marine biodiversity reduction in sensitive regions will challenge the sustained provision of fisheries productivity and other ecosystem services for many developing countries in Asia. These changes have complicated the mitigation and adaptation policies and strategies in response to coastal and ocean related climate change impacts.

All these willhave adverse effects on thelivelihoods of the coastal communities of Sri Lanka and will determine the future of the coastal vegetation and ocean resources. So, appropriate mitigation and adaptation measures are needed to minimize the impacts. There are many policies and strategies that can be adopted by countries depending on the specific types of impacts they face. While adaptation is more individual country-focused, effective mitigation will not be achieved if individual countries only advance their own interests independently.

Sri Lanka launched its climate change policy in January 2012. It has identified sea level rise as a key impact of climate change. The policy proposes incorporating adaptation measures into coastal resource management to minimize the impacts. The national climate change adaptation strategy, introduced in December 2010, recognizes the importance of sea level rise and changes in the oceanic environment under the areas of fisheries, urban development, and human settlements.

Even though the population growth rates have slowed down over the years, Sri Lanka is gradually becoming urbanized. By 2025, Sri Lanka will have an urbanization level of 18% where the majority of the coastal areas will be heavily urbanized[iii]. The majority of Sri Lanka’s economic development activities are concentrated in western, southern and northern and eastern regions of the country with new sea ports, airports, and highways. Therefore, coastal areas of the country play an important role in the economic development and urbanization of the country[iv].

The Ministry of Environment and Natural Resources, Coast Conservation Department, Urban Development Authority, and Ministry of Disaster Management are jointly developing coastal area development and resource management plans to address the adverse impacts of sea level rise. Urbanization plans are taking into account the possible sea level rises in demarcating boundaries for human settlements, as well as rehabilitating storm water discharges and salt water intrusion pathways. There are coastal communities that are working together with government institutions and other stakeholders to develop community-based adaptation programmes. Early warning systems are being established and coastal communities have been given many hours of training on how to respond to short term and sudden sea level rises. All these actions suggest that there are certain strategies in place to counter the possible sea level rises in the future due to climate change.

Attention towards managing ocean resources however seems to be limited, particularly, managing the country’s fish stock. Possible changes in fish catch due to changes in the oceanic environment, as well as the impacts of changes in the sea water flows and possible adjustments in fishing times, areas and fishing effort may need more adaptation interventions. Sri Lanka’s coastal fisheries are managed as a common property. While operation licenses are required and the boats have to be registered, quota systems are not in place to prevent over fishing[v]. While thorough research is required to identify the changes in the fish catch and quality due to climate change impacts, regulatory mechanisms such as quota systems are needed to prevent overfishing and deterioration of the fish stock in the future.

Sri Lanka is an attractive tourist destination for its scenic beaches, beach recreation sites, corals and ornamental sea fish. Climate change will impact the existence of these natural endowments, resulting in significant impacts on the tourism industry[vi]. Countries have developed many mechanisms to protect these ocean resources from climate change impacts. Declaration of protected areas and identification of climate resilient varieties of coral and ornamental sea fish are two widely discussed strategies[vii].

Sri Lanka is not fully ready to tackle the potential impacts of climate change on coastal and ocean environments. More consideration and research is needed to better manage ocean resources such as fish, corals and ornamental sea fish. Sri Lanka must take these into consideration when the national adaptation action plan is formulated. Moreover, planning for the future and investing in mitigation is essential[ix]. By implementing well-designed adaptation and mitigation policies and strategies, Sri Lanka will be better placed to face the impacts of sea level rise and a changing oceanic environment.

[i] IPCC, 2013, “Summary for Policymakers. In: Climate Change 2013: The Physical Science Basis. Contribution of Working Group I to the Fifth Assessment Report of the Intergovernmental Panel on Climate Change”, IPCC.

[ii] IPCC, 2013, “Summary for Policymakers. In: Climate Change 2013: Impact, Adaptation and Vulnerability. Contribution of Working Group 2 to the Fifth Assessment Report of the Intergovernmental Panel on Climate Change”, IPCC.