‘What’s Unique About the WCY 2014 and What Happens Next?’ – Interview with Milinda Rajapaksha 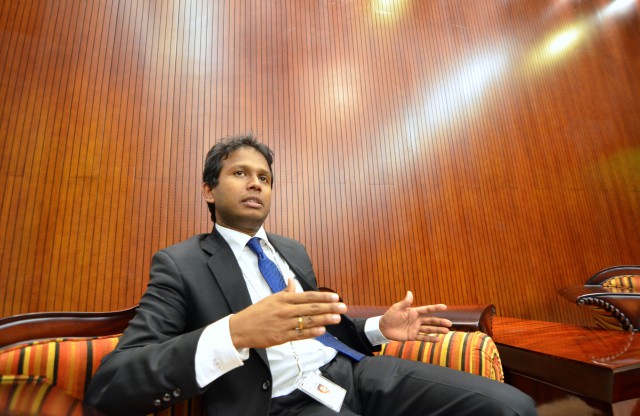 The World Conference on Youth 2014 (WCY 2014) came to a close on Saturday (10th) with the ‘Colombo Declaration on Mainstreaming Youth in the Post-2015 Agenda’ being adopted by the delegates from over 160 countries.

After nearly a week of deliberations, the WCY achieved this unique milestone of a joint government-youth declaration to be tabled at the UN General Assembly, and placing Sri Lanka firmly in the centre of the post-2015 development agenda. Yet, as the conference comes to a close, many who were not directly or indirectly part of it are not sure what the WCY was all about, why it is unique, what’s so important about it, and what happens after its conclusion. So, on the sidelines of the final day of the WCY 2014, Talking Economics caught up with someone who is ideally placed to give you this introduction – Milinda Rajapaksha, the National Director of the National Youth Services Council (NYSC) of the Government of Sri Lanka. Milinda played a lead role in Sri Lanka’s hosting of the WCY 2014, as a member of the International Youth Task Force (IYTF), the multi-country team that led the content development of the conference. In this 11-minute audio interview, Milinda talks about what the WCY 2014 is and what it is trying to achieve. To skip straight to the audio, click here, or continue reading for a brief overview of his comments.

Milinda emphasises that this years conference is a landmark moment, for several reasons. Most of the past conferences, since the first one in 1936, have taken place in Europe. But with the changing global economic paradigm, coupled with the youth bulge in Asia and other developing regions, there is increasing recognition of the important of bringing young people into the policy-making process. He remarked that Sri Lanka has much to be proud about in hosting this conference, as it required giving leadership to a global process. Taking global leadership is not just about hosting a conference. You have to get consensus, and get different multilateral parties agreeable to the process, not only the outcome.

“Taking global leadership is not just about hosting a conference. You have to get consensus, and get different multilateral parties agreeable to the process, not only the outcome”

He is keen to see the outcome document have a wide-ranging policy impact. He talked how this can happen both internationally and locally. Internationally, the key step is for the Declaration to be tabled at the General Assembly. He is confident of this happening, because the President of the General Assembly, John Ashe, was present during the entire conference and promised to do so. This will then feed in to broader UN and national government activities. He says, the document is “Not just going to New York, but to the UN system. Then, UN will work on so many researches, data, finding more case studies to enhance this. End of the day, to put money, governments need more information and data”.

Meanwhile, in Sri Lanka, Milinda hopes to embark on a programme that takes the WCY outcomes back to the village-level. “We are trying to go to 26 districts […] to develop a roadmap which is tangible for the pradeshiya lekam or the district level”. He concluded with a commitment to making the WCY relevant for Sri Lanka – “We came to the world, now it’s time to go back to the village”.

Listen to the full interview via SoundCloud below.