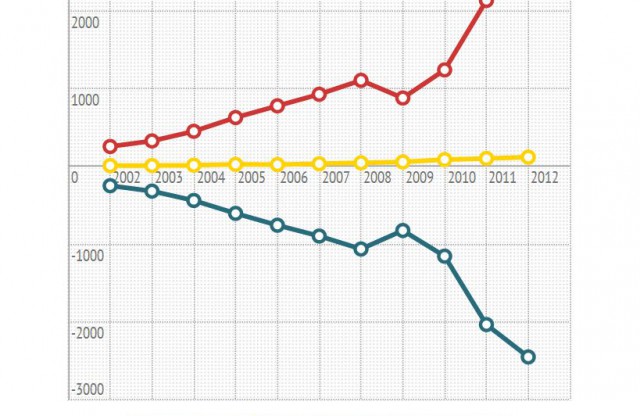 Sri Lanka and China have embarked on a joint feasibility study of a Free Trade Agreement (FTA) and an agreement is expected to be sealed by the end of the year according to a number of reports in the media recently.

However, there has been little analysis or discussion about the potential for trade expansion under a Sri Lanka-China FTA beyond general statements on how it would potentially boost bilateral trade. In this context, this blog delves into trade data to examine Sri Lanka’s trade patterns with China in recent years, and identifies some sectors which could stand to benefit from a negotiated trade agreement.

Emergence of China as a Major Economic Partner

While historical and cultural relations between Sri Lanka and China go back to many centuries, modern day economic and political ties were established with the signing of the historic Sino-Lanka Rubber-Rice Pact in 1952 and establishment of formal diplomatic relations in 1957. Over the past 55 years, bilateral economic cooperation has expanded under very cordial relations established between the two countries. More recently, economic relations have been elevated to a higher level with China emerging as Sri Lanka’s largest aid donor as well as an important source of investment.

According to trade statistics, bilateral trade has also seen a notable expansion. Total trade between the two countries has increased steadily over the years; almost doubling between 2008 and 2012 from US$ 1.5bn to US$ 2.7bn[i]. China is now Sri Lanka’s second largest trading partner[ii] as well as the second largest source of imports (after India). In 2012, China accounted for 14% of the total imports of Sri Lanka but is less prominent as an export market for Sri Lanka. It ranked as the 16th largest export destination and accounted for only 1.2% of total exports from Sri Lanka in 2012. Nevertheless, the importance of China as an export destination seems to be on the rise given that exports to China have been growing vigorously over the years, recording an annual growth of 27% per year during 2008-2012. This was higher than the growth in Sri Lanka’s exports to the world (6%) during the same period.

Meanwhile, imports from China have grown at a faster rate (29%), resulting in an expanding trade deficit (Figure 1) which by 2012, stood at US$2.4bn. In view of the widening trade imbalance, the move to sign a bilateral trade agreement is timely.

What is Sri Lanka Currently Trading with China?

Reflecting Sri Lanka’s export structure, the export basket to China is dominated by textiles (41%) (Figure 2). Plastics/rubber, vegetable products and mineral products account for around 13% each. These four sectors together accounted for 81% of Sri Lanka’s total exports to China in 2012. These sectors no doubt stand to benefit from greater market access under a FTA with China. Sri Lanka’s imports from China mainly consist of machinery and electrical goods, which account for 34% of total imports from China (Figure 3). Textiles are the second largest import item from China accounting for 27% of total imports.

What is the Trade Potential between Sri Lanka and China?

There appears to be potential for Sri Lanka to expand trade with China given the sheer size of the Chinese economy and its share of world trade. In 2012, China imported US$ 1,818 bn from the world (accounting for 10% of world imports) and exported US$ 2,048 bn (11% of world exports).

Based on a preliminary analysis of RCAs, it appears that Sri Lanka and China have comparative advantage in quite dissimilar sectors which suggests that there are complementarities between the two countries to stimulate bilateral trade. Moreover, some of these sectors face high tariff rates in China and as such they are likely to benefit from tariff concessions negotiated under a FTA. The only exception is textiles, which both countries have a comparative advantage.

Some Issues to Consider

Tariff concessions alone may not be sufficient in expanding trade between the two countries. The actual capacity of Sri Lankan exporters to cater to the Chinese market, as well as non-tariff measures (NTMs), may constrain traders from fully utilizing the agreement. This is clear from Sri Lanka’s experience with existing free trade agreements with India and Pakistan[iii]. Also, China has already signed FTAs with 8 other countries, with 6 more under negotiation[iv] which means that that other countries producing similar goods to Sri Lanka may already have preferential or duty free access to the Chinese market. In this context, it is imperative that trade negotiations not only cover products in which Sri Lanka has a comparative advantage but also that the concessions awarded by China should be higher or at least equal to the reduction in tariffs granted to other countries. In negotiating a trade agreement with China, some of these issues need to be taken into account to ensure that Sri Lanka and China can benefit mutually under a FTA.

The Institute of Policy Studies of Sri Lanka (IPS) has embarked on a study of the opportunities and challenges of a FTA with China, from a Sri Lanka perspective. The findings from the study, which will be available by mid this year, aims to stimulate an informed discussion and influence policy outcomes.