Dale Mortensen and the Real Crisis of Unemployment 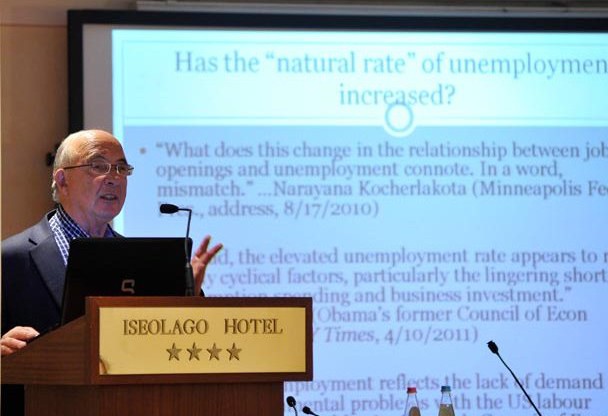 When I heard of his passing-away, it took me back to June last year in the little lake-side town of Iseo, in Northern Italy, where I was fortunate to have heard one of his last international lectures. His analysis of how the prolonged crisis in Europe will hurt youth employment greatly influenced my thoughts on how ‘unemployment scarring’ will affect the vitality of Western economies for decades to come. His analysis of the consequences of ‘job polarization’ in the US on the strength of the American middle-class influenced my thoughts on how Sri Lanka too would be affected by skill-biased technical change as the economy grows in complexity.

Mortensen’s Nobel and Beyond

Dale Mortensen, Professor of Economics at Northwestern University at the time of his passing-away, pioneered a new approach to studying important economic problems now known as ‘search theory’. Together with Peter Diamond and Christopher Pissarides, Mortensen won the 2010 Nobel Prize in Economics for their analysis of markets with search frictions. Utilizing the theory, Mortensen developed an original approach to investigating the labour market, revolutionizing how economists and policymakers view labour market matters and the role of government policy and regulation. That original approach can, for example, explain why it takes so long for job seekers to find acceptable jobs even in good economic times, when vacancies are plentiful, or why firms with vacancies fail to fill positions quickly even though large numbers of people are unemployed.

In the US, the story is an interesting one, and this is best looked at using the ‘Beveridge Curve’. This maps the rate of new job openings vs the rate of unemployment. As per the curve, when vacancies go up, unemployment has to fall. But, according to the data he presented for the period 2000 to 2012 (looking at the previous downturn after the dotcom bust as well), the U.S. Beveridge curve appears to have shifted out. What does this mean? Essentially, it suggests that at a given rate of vacancies, the rate of unemployment is much higher. Mortensen argued that the increase in unemployment duration is the key explanation to this, because duration is very closely associated with the rate of job openings. Overall, all this suggests a more fundamental issue in the American labour market – that it may have become harder to match workers to jobs.

But differing viewpoints were expressed when this phenomenon was first observed. While Narayana Kocherlakota (President of the Minneapolis Federal Reserve) also believed firmly that this was due to mismatch, others like Christine Romer (former Chair of Obama’s Council of Economic Advisors) believed it was just cyclical effects based on depressed consumption spending and lower aggregate demand. Romer’s view was shared by those on the other end of the political spectrum as well. Martin Feldstein, Chair of Reagan’s Council of Economic Advisors, also believed that, “the high unemployment reflects the lack of demand rather than any fundamental problems with the US labour market”[1].

In his lecture, Mortensen went on to dig deeper into this issue, focusing on the theory of mismatch. He drew from the latest work by Acemoglu and Autor (2011)[2] which explored the effect of skill-biased technical change by ordering workers by ‘task assignment’ and ‘skill group’. For instance, categorizing workers by the nature of the tasks they do – ‘non-routine cognitive’, ‘routine’, and ‘non-routine manual’. Using this model, he showed that it is the ‘routine’ worker category that has suffered the most from the recession and its aftermath.

“Manufacturing occupations and administrative support used to employ millions. But technological advances have enabled many of these middle-class jobs to be automated or moved offshore”

Skill-biased technical change associated with the application of computers (information technology) as well as globalized trade has reduced demand for ‘routine’ tasks (manufacturing, clerical, and “back office” work). As Mortensen wrote in one of his last articles (November 2013), “Manufacturing occupations and administrative support used to employ millions. But technological advances have enabled many of these middle-class jobs to be automated or moved offshore – a process that is expected to accelerate with growing automation of knowledge-based activities and advances in robotics”[3]. As a result, this “middle-skilled” group of routine workers has been hit the most in the US as a result of the crisis. The middle-skilled also happen to form the backbone of the American middle-class. Hence, the widely spoken of prolonged effect of the financial crisis in the US is likely to be a prolonged depression of its middle-class and their feeling of a “jobless recovery”. This is particularly true of older workers than younger workers.

EU policymakers have reason to be worried. There is substantial evidence suggesting that when people are unemployed at a young age they are more likely to be unemployed and welfare-dependent later in life, and more likely to earn less wages, due to the “scarring effects” of youth unemployment[5]. The effect is more pronounced the longer a young person spends out of work.

Mortensen’s work in general, and the selected aspects of it discussed here in particular, do have implications for Sri Lanka.

The first relates to the issue of job polarization. While quality and frequency of labour market data lags far behind that of the US, suffice it to say there are signs that the Sri Lankan labour market too is going through a period of transition. Wages in some sectors are rising, while vacancies in some industries remain unfilled persistently. As technology takes a firmer hold in the country, and firms look to it to maintain their competitive edge, the resultant skill-biased technical change will adversely affect the employment prospects of a significant proportion of ’routine’ workers. They will find it difficult to fit into the new roles on offer, and will be left out of economic growth. To avoid this, there needs to be a robust programme of retraining, further/adult education, as well as increased flexibility on hiring rules, to help workers and firms adjust.

“In the economies of the West, the effects of the great recession will be felt for much longer than the current recoveries in GDP may suggest”

Timely reforms can help, and Germany is a case in point. Having undertaken strong and focused labour market policy reforms during 2003-2008 – when the going was good – Germany was able to successfully weather the storm. As Mortensen also observed in his lecture, “Germany believed that labour market reform saved them from the recession”.

The second relates to the jobless recoveries taking place in the US and EU. By this I do not mean merely the unemployment rate, but rather the wider problems caused by longer unemployment durations, the effect on incomes of middle-skill job losses (in the US), and the effects of high youth unemployment and resultant unemployment scarring (in the EU). As I argued in a previous article, “Prolonged unemployment in Europe will depress wages and reduce purchasing power of the region’s people. It will have a significant impact on not just how much of Sri Lanka’s exports would be demanded there, but also who will buy them and what type of products will be demanded”[6]. The heart of American consumerism that drove global exports – the middle-class – would not be as prosperous in the future as in the past and the next generation of young Europeans may not be as rich as they could have been, or their Asian counterparts will be. In the economies of the West, the effects of the great recession will be felt for much longer than the current recoveries in GDP may suggest.