Interview with Dr. Saman Kelegama on Economic Outlook for 2014 in the Global Economy and Sri Lanka 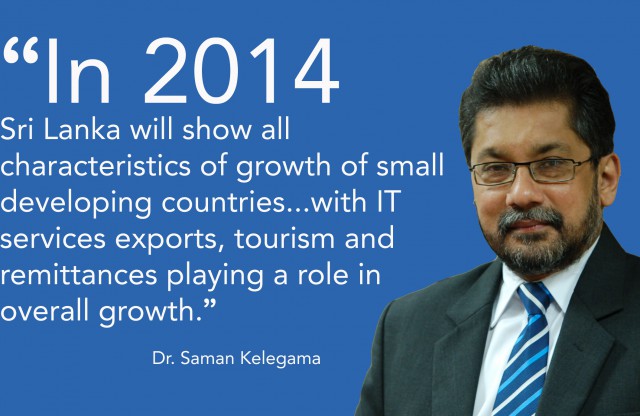 The Talking Economics Editorial Team interviewed Dr. Saman Kelegama, Executive Director of the IPS, to get his views on the outlook for 2014 for the global economy and for Sri Lanka. We reproduce the interview here…

Q: Dr. Kelegama, what is your overall take on the economic prospects for 2014, globally?

A: It’s difficult to forecast global economic growth in contemporary times because of the high volatility and uncertainty in an inter-connected world. Slow recovery from the 2008/2009 global economic crisis and external shocks has further aggravated the situation. Even an international institute like the IMF keeps changing their global economic forecasts every quarter. What is stated in their World Economic Outlook in April 2013 changes in the October 2013 report. Any prognosis on the global economic outlook and its implications need to be interpreted with caution.

Q: Based on the data available, what are your views on how 2014 will pan out for developed countries in particular?

The IMF expects that global economic growth in 2013 would be recorded at 2.9% and this will increase to 3.6% in 2014. Both forecasts are down by 0.3 and 0.2 points respectively, from the last prediction made by the IMF in July 2013. These latest predictions were made despite the signs of recovery in the Euro area in the third quarter of 2013. In the EU, business confidence indicators suggest that activities are close to stabilizing in the periphery and recovering in the core economies. But the worrying public debt level and the fragmented financial system are issues in the EU. The Japanese economy recovered from -0.6 per cent growth in 2011 to stable 2 per cent growth in both 2012 and 2013 after a quantitative easing policy pursued by the new government of Prime Minister, Shinzo Abe. As a large sum of the quantitative easing money are flowing out or leaking from Japan, the impact of this policy will gradually diminish in 2014 indicating a lower growth in the Japanese economy. Meanwhile, the US economy is expected to recover from 1.6% growth in 2013 to 2.6% in 2014.

Q: Let’s stay with the US for a minute – what are the key developments in the US economy to look out for?

After the financial crisis in 2008, US used several rounds of the bond buying strategy, known as ‘quantitative easing’, to pump credit to the US economy to revive it. Further to the announcements in June 2013, on 18 December 2013 it was announced that monthly bond purchase will be reduced by US$ 10 billion, which will amount to US$ 75 billion with effect from January 2014. So there are very clear signs of a tapering off of quantitative easing and the US Fed making a permanent exit from low interest rates. The impetus for stronger global growth will as usual come from the US economy.

Q: What about the prospects for emerging markets, particularly China, India and ASEAN?

China’s growth moderated in 2013 due to the re-balancing policy of focusing more on the domestic market. China is gradually shifting from the export-oriented and investment dominated economic model to a somewhat domestic-oriented and consumption dominated economic model. The 7.6% growth in 2013, although less than the 9.3% growth recorded in 2011, remains high by international standards. China is expected to maintain this growth rate for 2014 with 0.3 percentage points lower than 2013.

India, the other major market in Asia has shown much slower growth during 2012 and 2013, 3.2% and 3.8%, respectively. This has happened due to low business confidence resulting from policy uncertainty, double digit inflation caused mainly by deregulating administrative prices and depreciating currency, rising current account deficits, etc. The Indian case clearly shows that rising external account deficits cannot be solved by short-term foreign capital inflows. Measures to enhance exports by addressing deep seated structural problems in the economy are essential. With currency depreciation and other measures taken in recent months, India will show a growth revival to 5.1% in 2014 but elections related uncertainty in mid-2014 could dilute growth prospects.

Q: To what extent are developments in the West, for instance the Fed taper, having an impact on these emerging markets?

After June 2013, with the signals of US gradually ending its quantitative easing policy, we saw some funds exiting from developing countries back to the US. It is estimated that countries such as Malaysia and Thailand lost close to 1.2 per cent of GDP growth due to such pull-out of funds. Some East Asian countries saw an increase in portfolio inflows from Japan consequent to the Japanese stimulus which compensated for some of the capital outflows to the US. These developments in the global market have created volatility in Asian financial markets. Meanwhile, EU austerity is having an impact on ASEAN exports to EU. Overall, ASEAN countries will show a marginal improvement in their growth rates from 5% in 2013 to 5.4% in 2014.

Q: What are the prospects for global trade in 2014 – will there be a notable impact? Yes, all of these developments mean that there will be a weak recovery of global trade. This will be also due to some emerging protectionist forces by the limited progress of the WTO Doha Round (although the WTO Bali Ministerial was successful) and growing space of negotiations of mega regional initiatives like the Trans Pacific Partnership and Trans-Atlantic Trade and Investment Partnership. Of course, there will be better growth in 2014 compared to 2013 in overall global trading. In contrast to 2013 where a lower growth of imports and exports were seen compared to 2012, in 2014 there is estimated to be acceleration of import growth by 5.9% and export growth by 5.8% compared to lower growth for both in 2013.

Q: What about oil and commodity prices?

Q: How are small developing countries coping with these changes?

Despite volatility, the developing economies have shown promising growth in services exports, tourism and remittances. The services export growth has been mainly driven by the IT Sector. In Sri Lanka, for instance, IT exports that amounted to less than US$ 50 million in 2001 have reached close to US$ 500 million in 2012. The growth in tourism is a result of the growing income levels, spread of Internet, etc., and this too was seen in Sri Lanka in the post-2009 period at a rapid rate. People travelling overseas for jobs are also showing an increase. Remittances now exceed overseas aid and FDI in many developing countries. In Sri Lanka, remittances exceed 8 per cent of GDP and are an important source of support to the balance of payments. With male migration for jobs now exceeding female migration, Sri Lanka is gradually moving towards exporting semi-skilled and skilled labour.

Remittances and tourism have been significant sources in sustaining the economic growth momentum in some developing countries and we will see the same trend in 2014.

Q: Let’s focus a bit closer on Sri Lanka now. What is your overall assessment of Sri Lanka’s economic prospects for 2014?

In 2014 Sri Lanka will show all characteristics of growth of small developing countries as I mentioned above with IT services exports, tourism and remittances playing a role in overall growth. With close to 6% GDP public investment in physical infrastructure as announced in the 2014 Budget, the debt financed government-led growth with some spillovers to private sector activities like construction will be visible in the economy. Overall, Sri Lanka will also show a slight improvement in growth in 2014 compared to 2013 but the improvement may not manifest in full if 2014 is going to be an Election year. Perhaps the growth rate will be between 7 per cent and 7.5 per cent — a reasonably high rate from an Asian perspective.

Q: You mentioned debt-financed growth. There are many questions regarding the sustainability of this strategy. How do you see it playing out in 2014?

We may see the end of global easy money in 2014 with the tapering off of quantitative easing in the US. Short-term foreign capital inflows to Treasury bonds/bills cannot be relied upon as an assured source of foreign exchange to boost up reserves in the coming years. LIBOR rates will grow at a faster rate in 2014 relative to 2013. This in turn means that international commercial borrowing is going to become costly in 2014. Sri Lanka has already seen these tendencies in the second half of 2013 in its pursuit of borrowing from the global market where the US$ 750 million bond issue of the NSB carried 8.87% interest rate and the bond issue of the DFCC carried 9.62% interest rate and the bank settled for US$ 100 million instead of going for the desired US$ 250 million. Already the government has announced that it will go for a US$ 1.0 billion sovereign bond in 2014. Presumably, part of it will go for infrastructure development work and other part for debt/interest repayment. What interest rate it will carry with the current BB- Sovereign Credit Rating will be an important issue in the context of overall management of the economy. Needless to say, a lower rate will be more manageable than a higher rate.

Q: Do you see any significant developments on the international political economy and trade front?

A: During the last four years Sri Lanka has been hit by two sanctions, viz., the GSP-Plus removal in August 2010 and US sanctions on Iran starting July 2012 that diminished crude oil imports from Iran at a concessional rate. The GSP-plus removal led to Sri Lanka losing over Rs. 780 million from ready-made garments – the largest export item of the country — as was reported in Parliament in October 2013. In 2014, Sri Lanka will embark on the China-Sri Lanka FTA. Will Sri Lankan ready-made garments gain in the Chinese market what it lost in the EU? Will the China-Sri Lanka FTA give duty free market access to key exports from Sri Lanka like ready-made garments, tea, gems and jewellery, rubber products, IT, etc? If generous market access to Sri Lankan active exports is offered by China it will also give a boost to the overall exports that is much needed at a time when the export share in GDP has declined.

Likewise, the US sanctions on Iran will hit Sri Lanka’s oil imports – the largest import item of the country — in 2013 since Sri Lanka had to opt for some spot market purchasing from Oman, Saudi Arabia, Singapore, Vietnam, etc., instead of the earlier arrangement of 93 per cent dependence on Iranian crude oil at a cheaper rate. Before the sanctions, the oil bill was 25 per cent of the overall import bill of $20 billion; i.e., close to $5 billion. In 2014, there are reasons to believe that the oil bill might be more than $5 billion if the price factor dominates over the volume. Given the improving relations between US and Iran there may be a possibility of removing these sanctions, and in that case, with overall global downtrend in oil prices in 2014, Sri Lanka will be a beneficiary.

Two important global political events to watch in the context of the Sri Lankan economy would be the March 2014 UNHRC Session in Geneva outcome and the May 2014 Indian Elections outcome and their implications for the economy.

Q: What are some of the key ongoing policy issues facing Sri Lanka that need to be tackled in 2014 and beyond?

A: Global experience shows that debt financed consumption and investment led growth does not necessarily improve market sentiments and is not sustainable. Sustainable growth requires real sector growth with exports taking the lead and increased inflow of FDI. So it becomes all the more important to build on the export pick up seen in Sri Lanka in the months of September and October 2013 and also create a consistent and predictable policy environment to attract more FDI to ensure sustainable high growth in the coming years.