The Urgent Need for E-Waste Management in Sri Lanka 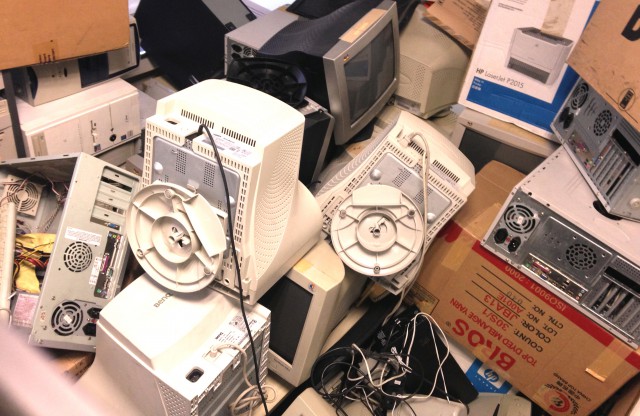 With the rapid developments in technology and the growing demand for new products, the production and consumption of more ‘Electronic and Electrical Equipment’ (EEE) has significantly increased around the world. This has also resulted in the acceleration of the rate of replacement of new products, creating a substantial burden on the waste stream in general. The rise of outdated EEE – which is known as Waste Electronic and Electrical Equipment (WEEE) or ‘e-waste’, is estimated to be around 40 million tons per year.[i]

Hassles of Electronic and Electrical Disposals

E-waste contains both hazardous as well as valuable substances, such as lead, mercury, cadmium, copper, gold, silver, Polychlorinated Biphenyl (PCB), and Brominated Flame Retardants (BFR). Unless e-waste is processed, recycled or disposed in a proper way, it will have serious impacts on human health as well as on the environment. Once toxic substances are exposed to the surrounding environment, they contaminate the air, soil and water sources, and could eventually enter the human body and other living organisms via ingestion of food, dust, water, inhalation of gases and particles in the air, and also through skin intake[ii]. However, we are often not aware of these substances or their implications on our health, and chronic exposure to these chemicals and their accumulated effects may become evident later in life. For instance, lead is used in a variety of EEE products, such as lead-acid batteries, printed wiring boards (PWB), Cathode Ray Tube (CRT) monitors for televisions and old computers. Exposure to lead particularly, by young people, can cause damage to the nervous, blood, and reproductive systems. Mercury, which is contained in the fluorescent lamp in LCD monitors, CFL/tube bulbs, and thermometers, is another chemical which can cause serious health effects to the human brain and liver. Furthermore, Cadmium, which is used in the old CRT monitors, rechargeable batteries, and switchers, can primarily affect the kidneys and lungs, and can be a cause for prostate cancers. Polyvinyl chloride (PVC) which is a popular plastic material, mostly used in pipes, electronic and household appliances, is toxic when it burns as it releases hydrogen chloride gas, forming hydrochloric acid that can cause respiratory diseases for humans. Another such harmful chemical contained in EEE is Arsenic. Once exposed, it can cause lung cancers, skin diseases, and nervous system disorders. [iii]

E-waste Management Can Be Profitable

Considering the numerous risks caused by e-waste on human health and the environment, it is important to manage the improper disposal of e-waste through methods such as recycling. Therefore, the three main subsequent steps which should be followed for potential benefits include the following: (i) collection; (ii) pre-processing (sorting/dismantling); and (iii) end-processing (refining/disposal). Adopting a proper recycling system brings positive externalities in terms of health, environment as well as economically.

Countries such as China, Singapore, Belgium, Germany, and Japan, which invest in e-waste recycling plants, are good examples of leading e-waste recycling markets in the world, highlighting it to be an economically profitable market. Furthermore, e-waste recycling industries in Brazil, China and USA have created jobs for 12 million people[iv].

One such registered e-waste recycling factory in Sri Lanka, which recycles all types of e-waste (except CFL and tube bulbs), was able to recover 35,724 kg of plastic, 58,526 kg of metal, 83,358 kg of glass out of the total e-waste collection of 177,609 kg in 2012. Furthermore, out of the total quantity of metal, around 6,368 kg of complex metal were exported for refinement to the world’s largest precious metal refinery. In addition, they earned foreign currency by trading the extracted gold, silver, palladium, and copper in the London Bullion Market (LBM) and London Metal Exchange (LME). The rest of the materials were sold to different companies in the country, which reuse these materials for a variety of products. This factory has also created new jobs for skilled and unskilled personnel as well.

Asia Recycling Company under Orange Electric, which is the first recycling company in South Asia, is another registered factory that particularly recycles all types of CFL and tube bulbs. They extract materials such as glass, plastic, metal, and wood, which are sold to different companies within the country for reuse, and chemicals such as mercury and phosphorous powder are exported to Germany for refining, thus earning foreign currency.

Despite these initiatives, Sri Lanka is still far away in terms of e-waste management compared to most countries. Thus, existing bottlenecks need to be addressed in order for Sri Lanka to be a sustainable e-waste recycler. Strengthening policy and legislation is vital. Apart from the existing policy and regulation, the government could reinforce regulations, specifically on the imports of EEE. For instance, regulations should be enacted on discouraging the imports of used EEE, and to import equipment that has less hazardous elements; for example, LED/LCD monitors can replace CRT monitors, since CRT has more hazardous elements. In addition, suitable technology and skills need to be implemented in order to streamline the sustainable e-waste recycling system in the country. Proper mechanisms should also be developed to take out the informal market for e-waste recycling in the country. Improving the knowledge on e-waste within the community is crucial. Conducting programmes which highlight the social and ecological impacts of improper handling of e-waste, and the importance of disposing e-waste in proper places and in proper ways can be effective in raising public awareness. This can be provided through the public health staff, starting from grassroots levels. Also, the media can play a pivotal role in disseminating the message and making the mass community aware of the impacts of improper handling of e-waste as well as the proper mechanisms in recycling and its benefits.

‘E-waste’ should not be considered as normal ‘junk’. It may not impact you instantaneously, but could do so later in life. Therefore, much attention should be paid to this issue, considering the many health impacts that could be instigated by the e-waste around us.

[ii] Bergman Åkeet. al., State of the science of endocrine disrupting chemicals 2012: summary for Decision-Makers, UNEP and WHO 2013.

[iii]Bergman Åke et. al., State of the Science of Endocrine Disrupting Chemicals 2012: Summary for Decision-Makers, UNEP and WHO 2013; Cobbing Madeleine, Toxic Tech: Not in Our Backyard – Uncovering the Hidden Flows of E-Waste, Greenpeace International, Netherlands, 2008