Print this article
By Roshini Jayaweera and Priyanka Jayawardena (Research Officers – IPS)
In 2010, total foreign remittances increased by 23.6% and amounted to US dollars 4,116 million1, thereby crowning remittances, personified by the migrant worker, to the foremost foreign exchange earner for the Sri Lankan economy. At present, 23% of the total labour force (1.8 million) is engaged in foreign employment2. 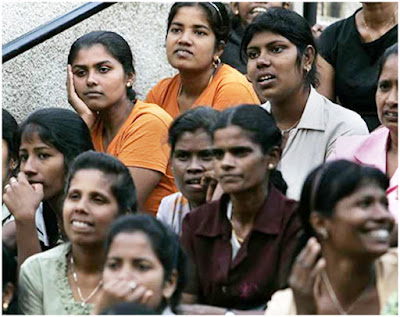 Figure 1 below shows that both skilled and unskilled labour categories have recorded significant increases in migration for foreign employment. It is now estimated that the number of female migrant workers seeking employment as housemaids fluctuates between 100,000 and 115,000. The female workforce is confined to housemaids and unskilled manpower categories, indicating that feminization and unskilled labour, feature prominently in Sri Lankan migration patterns and female migrants are more vulnerable. 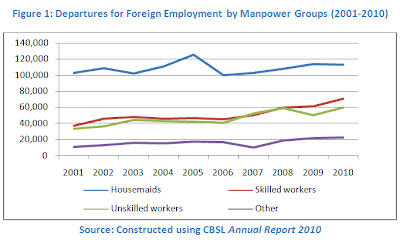 Unskilled labour migration and feminization feature prominently in Sri Lankan migration patterns, and have exposed migrant workers to a myriad of labour issues, harassment, and abuse in the workplace, making them a vulnerable group. It is reported that, in 2010, the primary cause of complaints (21%) received by the SLFBE were based on breach of contract, which was closely followed by 20% of complaints being related to defaulting on payment of wages. Alarmingly, the third highest category of complaints was related to physical and sexual harassment, of which 96% was made by female migrants3. The statistics related to complaints are in all instances, higher for female migrants than for male migrants, indicating that female migrants are most at risk.

Due to the unskilled nature of migrant labour, return to labour is also low and as result the impact of migration on economic development can be lower. The impact of migration and remittances on household welfare is said to depend on the allocation of household resources. A recent study4 on the impact of remittances concluded that migrant households spend more on education and health annually than non-migrant households. However, a significant improvement in education or health was not observed. It was also concluded that the impact of the remittances is influenced by the remittance sender and remittance user, and thus the capacity of the migrant worker plays a crucial role in the eventual welfare of the household. This requirement is clearly acknowledged by the Budget 2012 proposal to develop the capacity of migrant workers, thereby increasing the number of skilled labour migrants which would also bridge the gap between the international demand for jobs, and Sri Lanka’s capabilities.

Table 1 depicts the supply gap of Sri Lankan labour for foreign employment by skill level. The highest percentage of unutilized employment opportunities is observed in the skilled level (77%) whilst the lowest is observed in the middle level (9%). It is also significant to note that whilst the majority of Sri Lankan migrant workers are made up of housemaids, 68% of employment opportunities remained utilized.
Issues cropping from supply shortages can be addressed through fully implementing the 2012 Budget proposals. The pre-departure training programme conducted by SLBFE offers only limited capacity development for migrant workers. Further, only a handful of institutions offer training and/or educational programmes for migrants, thus leaving them vulnerable as discussed above. It has already been identified that offering National Vocational Qualification (NVQ) Level 1 qualifications to migrant workers could be offered by the Tertiary and Vocational Education Commission (TVEC). The proposed Budget 2012 changes would be welcome and have a lasting impact not only on the migrant worker, but also have an impact on the migrant worker’s household and thereby impacting on economic development.
Conclusion

The Sri Lankan migrant workforce provides an important contribution to the economy. However, their contribution is being undervalued by a lack of existing institutional frameworks to maximize their potential whilst at the same time provide protectionary measures in the course of foreign employment. This is particularly significant for female migrant workers who are exposed to an alarmingly high rate of physical and sexual abuse. The proposed Budget 2012 changes provide an ample opportunity to rectify and minimize risks that are presently at a high level. They provide opportunities for returning migrant workers to reintegrate better by offering incentivized schemes that encourage returning migrant workers to invest their earnings and start their own businesses. Furthermore, a holistic implementation of these changes, along with consideration of the demand that exists for skilled workers from Sri Lanka presents a more optimistic opportunity for those presently unemployed. Implementing the declared policy will be the key in mainstreaming migration to the overall development strategy of Sri Lanka.
Citations:
1CBSL Annual Report, 2010.
2SLBEF Annual Report, 2009.
3Annual Statistics Handbook of Foreign Employment 2010.
4Based on a study carried out for a South Asia Network of Economic Institutions (SANEI) funded project in 2010 by a team of IPS researchers consisting of Nisha Arunatilake, Suwendrani Jayaratne, Priyanka Jayawardena, Roshini Jayaweera, and Dushni Weerakoon.
5The demand is overestimated as foreign employer companies offer the same job vacancy to 3-4 local recruitment agencies.
Tags: Budget 2012 International Poverty
Related Articles