Print this article
By Priyanka Jayawardena, Research Officer – IPS
Despite remarkable achievements in the health sector, malnutrition has been a persistent health challenge in Sri Lanka. More than 1 in 5 under-five year olds are underweight in the country. Nearly 1 in 6 babies born has a low birth weight. These numbers are worse for some population groups in the country. Children in the estate sector are twice as likely to be underweight than children in the urban sector, and in the Badulla district, 1 in 3 children are underweight. Despite countless initiatives to alleviate malnutrition over the years, child nutritional levels have improved only marginally in the country (see Figure 1). As Sri Lanka aims to set itself on a high growth trajectory, this is no doubt a cause for concern as it impacts on the quality of the country’s workforce.
Figure 1: Little improvement in prevalence of underweight children and low birth weight babies 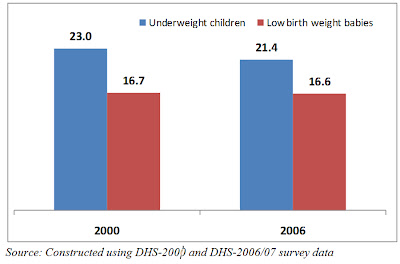 Child Malnutrition: Looking Beyond Health
Internationally, there is recognition that, improved health care alone cannot improve all health outcomes. This is because there are deep rooted socio-economic factors affecting health. For example, a child’s nutritional status in life as well as child’s birth weight is determined by a number of factors, genetics, maternal characteristics, the environment in which a child lives, and social circumstances. Nutritional disparities themselves are also driven by so-called social and economic determinants, such as income level, mother’s education, and living conditions in homes and neighborhoods. Therefore, the study of overall determinants of childhood malnutrition is not solely enough to address the malnutrition problem at a practical level. Information on socio-economic determinants of childhood malnutrition as well as causes of higher childhood malnutrition amongst lower socio-economic groups is important to improve the effectiveness of policies aimed at reducing childhood malnutrition, especially in severely affected populations.
Childhood Malnutrition: Exploring the Causes
Low birth weight is a major cause of malnutrition in children under five years old. Babies born with low birth weight are twice as likely to become underweight children compared to babies with normal birth weight. Low birth weight is also associated with growth retardation throughout childhood, adolescence, into adulthood, and also carry on the vicious cycle of malnutrition. Finally, low birth weight causes long-term consequences for individuals, households, communities, as well as the country.
Growth retardation accelerates with weaning. One child in four is underweight among 18-59 months old children (see Figure 2). Child malnutrition seems to increase after the first year of life and remain high thereafter (see Figure 2). Long term childhood growth retardation may be an indication of either inappropriate food intake in terms of quantity or quality during the weaning period as well as poor health status. The low risk of malnutrition during the first 6 months may be due to the protective effect of breastfeeding. According to DHS (Demographic and Health Survey)) estimates, 98% of children in the country are breastfed, while about 73% are exclusively breastfed during the first four to six months.
Child malnutrition is linked with mother’s malnutrition, education and knowledge. Mother’s nutritional status has a strong impact on a child’s nutrition as well as a child’s birth weight. 1 in 6 reproductive age (15-49 year olds) women are malnourished in Sri Lanka. Other than this direct impact, mother’s education has an indirect impact on childhood malnutrition. A child with a mother with an education level below primary level is twice as likely to be underweight than a child with a mother who has completed senior secondary level education.
Figure 2: Growth retardation accelerates with age 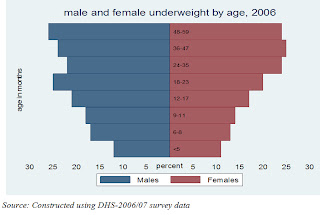 Child Malnutrition: Influence of Socio-economic Status (2)
There are considerable disparities in child nutritional across socio-economic groups that favour the better-off (Figure 3). A child belonging to the “poorest” socio-economic quintile is three times more likely to be underweight than a child in the richest quintile.
Figure 3: Prevalence of underweight children and underweight birth babies by wealth quintile 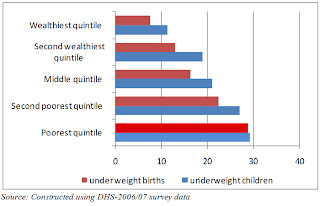 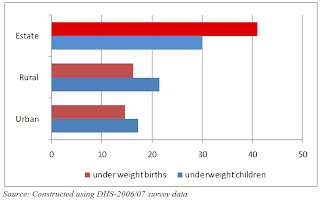 In the estate sector, about 1 in 3 under-five year old children are underweight, and 40% of babies have low birth weight (see Figure 4). A household’s socio-economic status is significantly lower in the estate sector than in the urban and rural sectors. In the estate sector, almost 63% of households fall into the poorest category while in the urban and rural sectors this is 8% and 19%, respectively. In the estate sector, low levels of education, especially among females, are a major cause of poor nutritional status, where nearly half of all women of reproductive age are educated below primary level. Poor education reduces the ability of mothers to benefit from the awareness programmes on family health and hygiene conducted by the health service.
Child Malnutrition: Sources of Disparities (3)
There is a need for improving child nutritional status not only in terms of averages but also for reducing disparities. Therefore, the reasons for prevalence of higher childhood malnutrition amongst lower socio-economic groups need to be examined. Half of the socio-economic inequality in child underweight is explained by the continuity of maternal malnutrition and low birth weight babies among lower socio-economic groups. On the other hand, 30% of the inequality in low weight births is also due to mother’s poor nutrition. A mother’s low level of education and health knowledge contributes one fourth of total inequality childhood malnutrition, while 40% of inequality in underweight birth babies. We must also bear in mind that regional factors also contribute considerably to measured inequality.
Addressing a Critical Concern
To break the vicious cycle of malnutrition in the country, Sri Lanka needs to go beyond health and look closer at the deep-rooted socio-economic factors which are transmitted from generation to generation in lower socio-economic groups. As the country enters middle-income status, it would be imprudent not to address this important issue of child malnutrition. It will be critical to ensuring inclusive and sustained growth in Sri Lanka in the coming years.
Notes:
(1) Study uses the nationally representative DHS (Demographic and Health Survey) conducted in 2006/07. All the estimates of this paper are based on DHS 2006/07 unless otherwise mentioned. Anthropometric index weight-for-age (underweight) is considered as a measure of underweight children. This index is expressed in standard deviation units (SD) from the median of the WHO Child Growth Standards adopted in 2006. Low birth weight is defined as a birth weight of less than 2500g. Body Mass Index (BMI) classification is employed for identifying mother’s nutritional status
(2) Household asset index was used as the measure of socio economic status
(3)The measure of socio-economic inequalities of underweight children and low birth weight babies are decomposed into determining factors. Concentration Index is used as measure of socio-economic inequality
Tags: Health Poverty
Related Articles